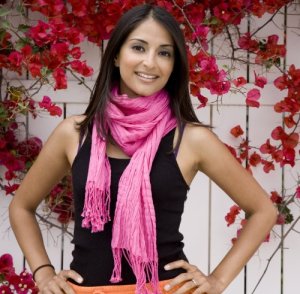 Recently, Lou at Mer de Noms has had a couple of articles on names that are in the UK Top 150, but fail to make the US Top 500. It’s an interesting look at differences in name popularity between the two countries. I thought about doing the same thing from an Australian perspective, but found the list became too long for my purposes. So I made my conditions a bit tighter – these are names that are on a Top 100 list in Australia, but don’t make the Top 100 in any other country, and aren’t on the US Top 1000.

Asha has two different origins and meanings. It can be seen as an Indian name from the Sanskrit for “hope, wish, desire”, or an East African name from the Swahili word for “life”. Either way it has a beautiful meaning, and both Indian and Swahili names are becoming fashionable in Australia. It fits in well with other popular Ash- names, such as Ashley, Ash, Asher and Ashton. There’s an attractive TV presenter in Australia called Asha Kuerten (pictured), which has probably helped it gain momentum here. Asha is currently #89 in Victoria, #77 in South Australia, and #68 in the ACT. It’s never been higher than #794 on the US Top 1000 (in 1989), and hasn’t charted there since 2003.

This is a pet form of the Irish name Brighid or its anglicised form, Bridget, which means “exalted one”. In Irish mythology, Brighid was the goddess of fire, poetry and wisdom. There was a 5th century Irish saint called Brigid, who is the patron saint of Ireland, and whose feast day on February 1 coincides with the pagan festival of Imbolc (possibly this day was sacred to the goddess of the same name). As around 30% of Australians claim Irish heritage, the name Bridie isn’t too unusual here, and there are several well-known women with this name, including Bridie Carter, a popular soap actress. Bridie is #70 in Tasmania, which has a particularly strong Irish community. It doesn’t chart in any other country.

This is from the English word for the valuable black wood which comes from the ebony tree; different species are native to India, Sri Lanka, Indonesia, Mauritius, and West Africa. Although Ebony is often said to be used mostly by African-Americans in the United States, in Australia it is not connected to a person’s skin tone and is just seen as another colour name, like Ruby, Jade or Amber, or a plant name, like Rose or Holly. The exoticism of this name seems to have possessed a strange fascination for Australian parents, and it has been a Top 100 name since the early 1980s. Perhaps popular songs from that decade, such as Ebony Eyes and Ebony and Ivory, helped give it a boost. It’s #63 in South Australia and #55 in Tasmania. In the United States, Ebony got as high as #132 in 1982, and hasn’t been on the Top 1000 since 2005.

The name of an American state, it means “land of the Indians”, because of the high Native American population in the area at the beginning of the 19th century (unfortunately, not to last). Indiana was used as a girl’s name (at least in fiction) before the American state was founded: Fanny Burney’s 1795 classic novel, Camilla, features a beautiful but shallow character called Indiana Lynmere. Possibly the name was intended as an elaboration of India, then part of the British Empire. French author George Sand also gave a character this name in her first novel, Indiana (1832). In this book, Indiana is a beautiful, romantic Creole from Reunion, of part-Indian descent. Here, there is a young TV actress called Indiana Rose Evans, and early this year, former NRL player Glenn Hall had a daughter named Indiana Maree. This name has only been Top 100 since last year, and it’s #98 in Victoria. Indiana has not been on the US Top 1000 since the late 19th century.

The name Georgia, also an American state name (the state is named after King George II), is more popular in Australia than anywhere else in the world, hovering around the #20 mark on most lists, and Top 100 since the early 1980s. The phonetic spelling Jorja has also proved popular here. It’s currently #88 in Tasmania. Jorja has only been on the US Top 1000 once, in 2006, when it was at #976.

This is an elaboration of the Latin name Lucia, meaning “light”. Always a rather literary name, it was created by Miguel de Cervantes for his 1605 novel, Don Quixote for a character in a farcical romantic subplot. The 17th century Spanish poet Lope de Vega wrote love sonnets to a woman he called “Lucinda” to protect her identity. In more recent fiction, Lucinda is the rather silly fairy godmother in the children’s novel Ella Enchanted, later made into a movie. Australian novelist Peter Carey’s Oscar and Lucinda won the 1988 Booker Prize, and was made into a film directed by Gillian Anderson. Another Australian connection is that Lucinda is the name of a small coastal town in Queensland. As Lucy is so popular, Lucinda seems like a pretty alternative which will allow Lucy/Lucie as a nickname. It was chosen for the name of lifesaver and reality TV star Dean Gladstone’s daughter Lucinda May. It’s # 67 in Tasmania. Lucinda hasn’t been on the US Top 1000 since 1987, and peaked in 1881 at #153.

The name Talia can come from a range of origins. It’s a variant of the Hebrew name Talya, which means “dew from God”; it’s the Italian form of Greek Thalia, which means “to blossom” (Thalia was one of the nine Muses); and it can also be a short form of Natalia, a Latin name which means “Christmas Day”. However, In Australia, Talia is often taken as coming from an Aboriginal word meaning “near water”. Talia has become hugely popular in many parts of Australia; it has a certain patriotic flavour, and is pleasingly multicultural, suiting a variety of backgrounds. Yet it is not found consistently on the Top 100 because it has so many variant spellings. Tahlia is the most common of these variants, and is beginning to overtake Talia because it makes the favoured pronunciation more clear. It’s #47 in New South Wales, #41 in Victoria, #39 in South Australia, #35 in Western Australia, #84 in Tasmania, and #52 in the ACT. Tahlia has never charted in any other country.

A specifically feminine form of the popular unisex name Taylor, this may have been coined in imitation of Kayla and related names. However, I can’t help thinking it’s taking off in Australia partly because it looks similar to Talia and Tahlia. It’s #68 in South Australia, #40 in Western Australia, and #94 in Tasmania. Tayla has only been on the US Top 1000 twice – in 1998 and 2006, and was never higher than #924.

This is an Arabic name usually translated as “radiance”. The meaning is gorgeous, and Arabic names are becoming increasingly fashionable here with our growing Islamic population. However, almost certainly the reason for its popularity in Australia is due to its similarity to the name Zara. Zara has been used in Britain since the 18th century, where it is the English form of the French name Zaïre, created by the author Voltaire in 1732 for his hugely successful play of the same name, and possibly based on the name Zahra. The drama was soon translated as Zara: A Tragedy, and proved a big hit with English audiences too, being staged well into the 19th century. For some reason, Zara has been a favourite in Australia for over a century, and there are several famous women from Australian history called Zara, including the glamorous wife of former Prime Minister Harold Holt. Zara is more popular in Australia than in any other country, and Zahra is rising on the basis of its success. It’s #82 in the ACT. Zahra has never charted in the United States.

Bronte and Lara, which were covered on earlier Name Lists – Bronte in Sydney Suburbs That Can Be Used as Girls Names, and Lara in Girls Names from Video Games. Bronte is #68 in Tasmania. Lara is #43 in New South Wales, #80 in Victoria, #79 in Tasmania and #52 in the ACT. Neither has ever charted in another country.

Close But No Cigar

These names don’t make the top 1000 in the United States, but do chart in countries besides Australia

There are some serious statistical issues facing anyone doing comparisons between countries. Australia doesn’t produce a national Top 100, states and territories have different population sizes, not all states and territories provide their Top 100, and one has refused to divulge any of its name data. Countries don’t all release their popularity charts for the year at the same time, so we are still waiting for the ones from England/Wales, for example, and I had to use the one for 2009. I used popularity charts from Behind the Name, and sometimes they are slow in updating their data as well. Not only that, but there is no data available for many countries.

So rather than getting into a mathematical tangle, this is only intended to be of general interest and show a few broad trends.

29 thoughts on “Girls Names That Only Chart in Australia”