Journalists Ben Fordham and Jodie Speers welcomed their second child on October 1 (their wedding anniversary) and named their daughter Pearl Nellie [pictured]. Pearl is a little sister for Freddy, nearly 2; Freddy’s birth was covered on the blog. 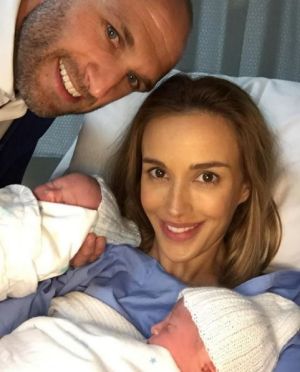 Former AFL star Chris Judd, and his wife, model and television presenter Rebecca Judd, welcomed twin boys on September 29 and have named their sons Tom Andrew and Darcy Hugh. Tom and Darcy join Oscar, aged 5, and Billie, aged 2; Oscar and Billie have both had their births featured on the blog.

AFL footballer Mitch Robinson, and his fiancee Emma McNeil, welcomed their daughter Charlie on March 10, a sister for Chance, age 2. Mitch plays for the Brisbane Lions.

A-League footballer Roy O’Donovan, and his wife Ellen, welcomed a son named Alfie on March 17 this year. Roy is an Irish footballer who has played in Ireland, the UK, Brunei, and Indonesia, and is currently signed with the Central Coast Mariners.

Former cricket champion Brett Lee, and his wife Lana, welcomed their daughter Helena in December 2015. Brett also has a son named Preston from his previous marriage to Elizabeth Kemp. During his international career, Brett was recognised as one of the fastest spin bowlers in the world, and won numerous awards. As well as working as a cricket commentator and coach, Brett has also had some success as an actor and singer in India, where he is a popular figure.

Former rugby league footballer Jason King, and his wife Jackie, welcomed a son named Cruz in 2014, a brother for William, aged 2. Jason began playing for the Manly Sea Eagles in 2003, and retired in 2014. He also played for New South Wales and Country Origin.

Athletics champion Tamsyn Lewis, and her husband, former cricketer Graham Manou, welcomed a daughter named Izabella Indie on August 9 2014 [pictured]. The couple have a dog named Indie, and Izabella’s middle name is after their pet. Tamsyn began competing nationally in 1994, and has won 17 Australian Championships, and has won gold at three Commonwealth Games. She works in the media, and covered the most recent Olympic Games in Rio: she now competes under her married name. Graham played for South Australia and the Melbourne Renegades, retiring in 2012. 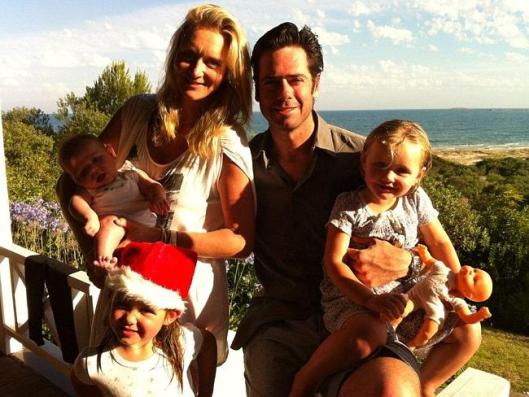 Gillon comes from a sporting famiily as his father Angus was a first class cricketer, and his uncle Ian McLachlan, the former Minister for Defence, also played cricket and was President of the South Australian Cricket Association. Gillon is the brother of sports commentator Hamish McLachlan, who has been featured on the blog as a celebrity dad. Gillon himself has played amateur Australian rules football and represented Victoria in polo.

Gillon has been employed by the AFL since 2000, and was appointed CEO in 2014. Gillon and Laura met while they were both residents of Trinity College at the University of Melbourne.

(Photo shows Gillon and Laura with their three eldest children)

Thank you to Brooke from Baby Name Pondering for sending in this story, which was published in the “Herald Sun”. All celebrity baby name tips gratefully received!

Country music singer Mollie McClymont, and her husband Aaron Blackburn, welcomed a son named Ned some time this year. Mollie is a member of the country music trio The McClymonts, along with her sisters Brooke and Samantha.

Country singer-songwriter Sara Storer, and her husband David O’Hare, welcomed a son named Joe in 2015; he joined older brothers Tom, Bill, and Harry, all under the age of 8. Sara has won 18 Golden Guitars at the Tamworth Country Music Festival, seven of them in 2004, which is the most number of Golden Guitars won by a performer in a single year.

(Photo shows Sara and David with sons Tom and Harry, and baby Joe on Sara’s lap: Bill was the photographer) 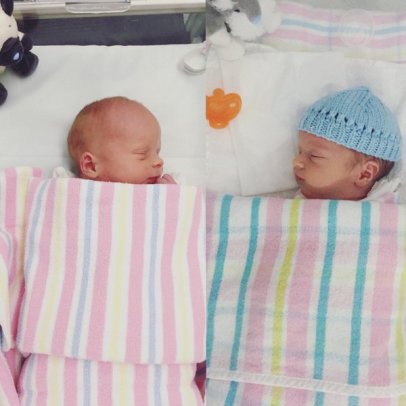 Talkback radio host Chris Smith, and his partner Susie Burrell, welcomed twin boys on January 24 and named their sons Aengus and Henry [pictured]. Chris presents the afternoon show on 2GB, and, like all shock jocks, is considered a controversial figure. He has two other children from his previous marriage to Ali Smith. Susie is a nutritionist.

AFL footballer Jake Stringer, and his partner Abby Gilmore, welcomed their second child on June 2 and named their daughter Arlo Lauren. Arlo joins big sister Milla, age 2, whose birth was featured on the blog. Jake plays for the Western Bulldogs.

Thank you to Ebony from babynameobsessed for contributing this story. All celebrity baby name tips gratefully received! 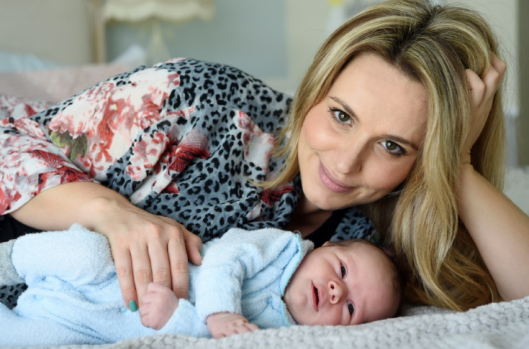 Mark “Soda” Soderstrom and his wife Kate welcomed their third child on September 16, and have named their son Otis. Otis joins siblings Felix, age 3, and Sienna, age 1. Mark is co-host of The Breakfast Show on Mix 102.3, and his radio partner Jodie Oddy queried the choice of the name Otis (in a way which implied a name like Otis needs some explanation). Mark revealed that he had seen the name Otis while getting into a lift: Otis are an American company well known for manufacturing elevators.

Alison “Ali” Hill and her husband Brandon welcomed their third child on August 8, and have named their son Seth Alexander [pictured]. Seth joins siblings Samuel, age 10, and Hannah, age 20. Alison is a singer and actress who is a radio presenter on 97.3 Coast FM in Mandurah. 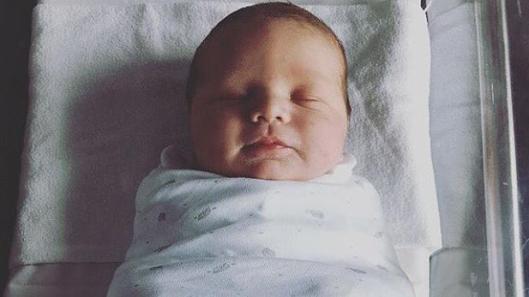 Two babies welcomed recently from AFL footballers who play for the Geelong Cats:

Tom Lonergan and his wife Kim welcomed their first child on September 2 and have named their son Bobby Thomas [pictured]. Tom has been playing for the Cats since 2005, and he and Kim were married at the start of this year.

Andrew Mackie and his wife Georgia welcomed their daughter Lindy Milla on August 21, a sister for Freddy, age 3, and Louie, age 2. Andrew has been playing for the Cats since 2005.

Sports stars Joe and Renae Ingles welcomed twins on July 26 and named them Jacob Antony and Milla Bernadette. Joe has played basketball in Australia, Spain and Israel; he currently plays for Utah Jazz in the NBA and is a member of the national squad, the Boomers, for which he has played at every Olympics since 2008. The winner of two gold medals and a silver at the FIBA Oceania Championships, Joe also won the Gaze medal in 2009 for being the best player in the Boomers. Renae is a netball champion who currently plays for the Adelaide Thunderbirds and for the national team, the Diamonds. She has won gold at the Netball World Championships, gold and silver at the Commonwealth Games, and bronze at the World Netball Series. She has won numerous awards, including Diamonds International Player twice.

Rugby union footballer Christian Lealiifano and his partner Luga Lam-Young welcomed their first child in June and named their son Jeremih. Jeremih is named after Luga’s favourite singer, but also with the biblical character of Jeremiah in mind. Christian was born in New Zealand and moved to Australia as a small boy. He has played for the Brumbies since 2007 and for the national squad, the Wallabies, since 2013. Last month fans were shocked to hear new dad Christian had been diagnosed with leukaemia: we wish Christian all the best with his treatment.

Football player Massimo Luongo, and his wife Shelley, welcomed their first child on June 15 and named their son Maxwell [pictured]. Massimo’s name is the Italian form of Maximus, so this seems like a way to honour dad without using the same name. Massimo has played football in England since 2011, and currently plays for Queens Park Rangers in the Championship League; he also plays for the national team, the Socceroos.

Former cricketer and national batting coach Greg Blewett, and his wife Katheryn, welcomed their second child on July 26 and named him Rory James, a brother for Samuel, aged 18 months; Samuel’s birth was covered on the blog. Greg has a teenaged daughter named Taylor from his previous marriage to Jodie Blewett, now Oddy, who has been featured on the blog as a celebrity mum.

Former Australian rules player Mathew Seal, and his wife Kate Twigley, welcomed their first child on August 30 and named him Levi Samuel. Mathew played in the WAFL, while Kate is the sister of model Rebecca Judd, who has been featured on the blog as a celebrity mum.