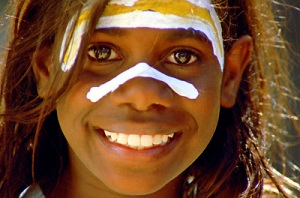 It is not difficult to find little lists of Aboriginal words that can be used as personal names, accompanied by their purported meanings; what is harder is to ascertain their origins. Even reliable baby name books are content to say that such-and-such a name comes from “an Aboriginal language”, without specifying which one. Often it seems that no-one knows: as languages became extinct, certain words and phrases were recorded for posterity, without any knowledge of which peoples the words were spoken by, and perhaps even without an understanding that there were different Indigenous peoples.

Historian Watkin Tench, a British officer who arrived on the First Fleet, noted that many Aboriginal names and words sounded pleasing and even familiar to the ears of English speakers, and recorded that the chaplain’s wife was so taken with the name of an Aboriginal woman she met named Milba that she christened her own baby, born in the new colony, Milba Maria Johnson.

It’s therefore not a new phenomenon for non-indigenous people to use words from Aboriginal languages as personal names, although some people may find the idea inappropriate or disrespectful. I’ve chosen names very conservatively, tending to pick out ones that are already in common use as personal names, as place names, or as business and organisation names.

You should also be aware that a word from one language may mean something completely different in another part of the country, so you may believe your child’s name means “desert flower”, but someone who speaks a different language may tell you that it means “swamp” or “elbow”. Hopefully it won’t be anything worse than those.

Names from Aboriginal languages tend to be easy for us to spell and pronounce. Because Aboriginal languages were not written down, they are now spelled exactly as they sound. The emphasis is placed very much as it is in familiar names, so that Kalinda is kuh-LIN-da, just like Amanda or Samantha. That could very well be due to European influence; I’m not sure.

This is my first Name List done under my resolution to rely on failed Google searches for blog entry ideas. “Aboriginal baby names” has been Googled many times to get to my blog, but I never felt that I knew enough about the subject to devote a blog entry to it. I still don’t know enough, but I now realise that waiting until I do know enough may mean never doing it at all.

This name is a corruption of the word allirea meaning “clear crystal quartz” and comes from the languages from around the Melbourne area of Victoria. There are extensive quartz supplies in the area around Melbourne, and Aborigines would have mined them for spear and knife edges. Quartz crystal was also used in rain-making ceremonies, and was both practical and spiritual in nature. However, in the language of the Arrernte people from Alice Springs, Allira means “niece”, and there is a character from legend with this name. Allira is not infrequently used as a brand name, which may be one reason why so many spelling variants exist for it: Alira, Allyra, Aleera, Aleerah, and so on. Another is probably to make the pronunciation clearer – uh-LEER-uh. Allira is commonly used as a girl’s name in Australia. Prominent people called Allira include glamour model Allira Cohrs, and surf Ironwoman Allira Richardson.

Bindi is said to mean “little girl” in an Aboriginal dialect, and that is how it seems to be understood by Indigenous people, although I cannot discover what dialect it is from. Famous people with the name include Bindi Irwin, the daughter of conservationist Steve Irwin, and Aboriginal artist Bindi Cole. In the Nyungar language from the area around Perth in Western Australia, bindi bindi means “butterfly”, and I can imagine using just one of the bindis to make a name. There was a West Australian Aboriginal activist in the early twentieth century called Daisy Bindi, and her surname was taken from a nickname given to her by her husband. Something that usually crops up in relation to this name is that bindi, or bindii, is also the name of different types of noxious weed. These have nasty prickles that get stuck in your feet, and I presume it means “horrible spiky things” in some Indigenous language. These are an introduced species though, so the name of the plant only dates to the mid 19th century. Bindi isn’t an unusual name for girls to have in Australia.

In the Gumbaynggir language from mid-north New South Wales, this means “girl”. There is a village near Coffs Harbour called Lowanna. In one of the dialects from Tasmania, it meant “woman”. I have seen Indigenous people translate it as “beauty” or “beautiful woman”, but do not know which languages they are drawing upon. There was a school story for girls from the 1920s about a rich, worldly girl called Lowanna Laurenson who ends up working in films in America, and this may have brought the name to people’s attention. It’s a popular name for businesses and organisations, and is also a type of strawberry. A prominent person with this name is Lowanna Gibson, a figure skater from an Indigenous background, but I’ve seen quite a few Aboriginal girls and women with this name.

According to Australian Aboriginal Words and Place Names and Their Meanings by Sydney J. Endacott (1955), this word means, “See!”, as if someone is exclaiming at something they have espied and wish to draw other’s attention to it. Endacott’s little book is a pamphlet which lists all the words and their meanings, but doesn’t give any further information about them or their origins. Baby name books gloss it as “a lookout”, and some add with a touch of imagination, “a lookout over the sea”. It’s commonly used as a place name and organisation name, and is popular as a name for houses which have a nice view. A prominent person with this name is Kalinda Griffiths, who last year won the Northern Territory Young Australian of the Year Award. Kalinda is of part-Aboriginal heritage, and is carrying out research in Indigenous health. There’s also a left-wing writer called Kalinda Ashton.

Kirra Beach is the name of a seaside suburb on the Gold Coast in Queensland, and kirra is said to mean either “leaf” or “boomerang” in a local language. According to The Australian Race by Edward M. Curr, kirra means “white cockatoo”; this is another book which gives lists of words and meanings, with no indication of which language or origin they are from. In the Murri language of southern Queensland, kirra means “to live”. This is a well used name in Australia, because it fits in so well with popular name such as Keira; Kirra-Lee is a common double name, and you can see how this fits in with Kirrily. Prominent people named Kirra include artist Kirra Jamison, and photographer Kirra Prendergast (both are from Byron Bay).

Maya (MY-uh) means “house, home” in the Jiwarli language of Western Australia’s Kimberley region. However, there are a number of similar words in other languages to denote some kind of hut or shelter, including maya or mia in Nyungar, and mya, mai, and mimi amongst the peoples of Victoria around Melbourne (often duplicated into maya-maya, mia-mia etc). It may help to explain why the names Maya and Mia are so popular in Australia – they have a native sound to our ears.

This word means “beautiful”, and seems to be from one of the languages around the Sydney area, although I’m not sure which one. Apart from being used as a girl’s name, it is often used as a place name or name for businesses and houses as well. It sounds very similar to the name Miranda. It’s common to spell it Mirinda; however in the Kaurna language from the Adelaide area of South Australia, mirinda means “leech”. Prominent people named Merindah include Merindah Donnelly, who was nominated for NSW Young Australian of the Year for her work promoting social justice for Indigenous people, and photographer Merindah Bernoth.

Merri Creek is in southern Victoria and joins the Yarra River, which flows through the city of Melbourne. The point where the creek and river meet was traditionally an important meeting place for the Wurundjeri people, and it is thought to be where an important treaty between Indigenous Australians and Europeans took place. Unfortunately, this creek was very badly treated, and became heavily polluted, but efforts are now being made to turn things around, with some promising results. Its name comes from the local phrase merri merri, “very rocky”; the doubling of a word is usually an intensifier in Indigenous languages. Although the meaning is not particularly feminine, it sounds similar to the name Mary, and of course exactly like the English word merry. If you like the sound of Merry, but worry it seems too light and frivolous, Merri gives it a little more oomph. The pollution aspect I admit is not appealing, but things are changing, and it is a testament to the resilience of nature. Merri is a surprisingly tough little name.

This means “small caterpillar” in a Tasmanian dialect. Caterpillars are important in the mythology of some Aboriginal cultures, because they are the precursor to the butterfly, which is seen as a soul of the departed. I haven’t been able to find out if they were especially important to the Tasmanians, but they may very well have been used as a food source. I haven’t seen anyone use Rianna in this way, but it seems to me an attractive name with a rather sweet meaning that isn’t too cutesy or pretty-pretty.

Tarni-warra is an onomatopoeic word to describe the sound of the surf in the Kaurna language of South Australia. Tarni is therefore taken to mean “surf, wave, breaker”, and is often assumed to be one of the influences upon the name Tahnee. I can’t confirm that, but Tarni Warra is a common name for houses on or near the beach, and Tarni is used as a place and business name as well as a personal name. Prominent people named Tarni include ice hockey player Tarni Loreggian, and Tarni Carter who sings with rock band Radio Flyer, but it’s not difficult to find Australian women and girls with this name. It does not seem to be heavily used by Indigenous people.