The Ross and John Show on 3AW often makes fun of celebrity baby names that they find risible, as well as traditional baby names with unusual spellings. Perhaps knowing his own baby name choice would come under scrutiny as a result, it took Ross nearly a week to announce the name of his new son.

As a prank, the 3AW breakfast team posted a joke birth announcement in the Herald Sun, suggesting that the new baby’s name was Cruzjett Zavier Wodger Alan Alan Al.

However, this morning Ross announced that, apparently rejecting these friendly hints, his son was to be called Hugh. As Ross’ real surname is Campbell, the baby’s name is Hugh Campbell.

Interestingly, only recently I suggested Hugh as a possible baby name in Boys Names from the Top 100 of the 1930s. Perhaps Ross and Sarah have been searching my blog for baby name ideas, or maybe I just have my finger on the pulse of Australian society …

Ross has two other sons from a previous relationship, but their names have not been publicly made known. Something a radio fan posted made me think their names might be Vincent and Joseph. 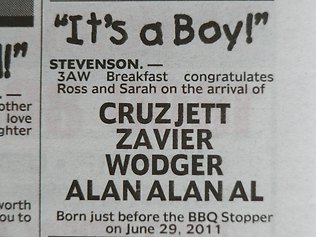