Champion cyclist, Cadel Evans, and his wife, Chiara Passerini, welcomed their first child last month. After two years of trying to adopt, last month they were awarded custody of a fifteen month old baby boy named Robel. Robel had been abandoned in the streets of Shashamane in Ethiopia at the age of six months.

Cadel was the first Famous Name on the blog, after winning the 2011 Tour de France. Since then, he has become a sporting hero and a household name in Australia. Chiara is originally from Italy, and is a pianist, gospel choir singer and music teacher. Cadel and Chiara live in the Swiss village of Stabio, near the Italian border; they also have a home in Australia outside Melbourne. They were married in Italy in 2005.

Robel is a common Ethiopian name. I have seen it translated as meaning “my joy”, but also used as an Amharic form of the name Reuben.

(Story and photos from the Sydney Morning Herald, January 28 2012) 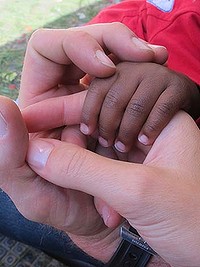