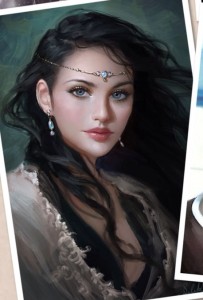 Catherine and her husband are putting together a long list of names for their baby, due next year. One of the names they are seriously considering is Lucia.

Catherine loves the English pronunciation for the name – LOO-sha, or LOO-shee-uh – as an interesting variation of Lucy. However, she is very wary about giving her little girl a lifetime of explaining and correcting the pronunciation of her name.

There are a few women named Lucia in Catherine’s family tree during the 19th century, and Catherine is of English and Irish ancestry. She wonders how these Lucias would have pronounced their names.

Catherine also wonders if anyone can help identify some characters named Lucia in English literature. There are plenty called Lucy and Lucinda, but precious few Lucias. She can think of Lucia from E.F. Benson’s Mapp and Lucia books (but Lucia is just a nickname and said the Italian way), and there is Lucia di Lammermoor from the Italian opera, but the character’s real name is Lucy, Lucia is an Italian translation of it.

Catherine, I think there might be two questions you are asking here about Lucia’s pronunciation

1. Is there a traditional or historical British pronunciation of Lucia, perhaps even one which can be referred to as a “correct” pronunciation for English-speakers?
2. How would the majority of Australians say the name Lucia, to give you an idea of how often it might need to be explained or corrected in everyday life?

These are highly intelligent and practical questions, but unfortunately I don’t think I have a definitive answer to either of them.

As far as I know, English-speakers say both LOO-sha and loo-SEE-uh. Which one your ancestors might have used is a bit of a puzzle. The Caribbean island of St. Lucia is said LOO-sha, which seems like it should be a clue, but perhaps isn’t.

It also occurs to me that Italian travel and culture was incredibly fashionable for the upper classes in Britain in the 19th century, which makes me wonder if your ancestors (if upper class or social climbers in even a mild way) might have used the Italian pronunciation, loo-CHEE-uh, to signal how cultured they were.

I will make a point of posting this article on the Facebook page for British Baby Names, in the hopes that name expert Elea Nickerson might be able to shed some light on the issue.

As to how most Australians would pronounce Lucia, I think it depends a lot on where they’re from. Anyone from an area with a significant Italian population is probably going to say loo-CHEE-uh. I would imagine that Italian-Australians would almost always say loo-CHEE-uh, and in a few cases, might persist with that pronunciation even after being told the person prefers it said another way.

I would probably say loo-SEE-uh if I saw it written down, maybe because of the name Lucy (I also tend to say LOO-see-us and LOO-see-an for the male names). I have met many other Australians who say loo-SEE-uh, although it seems to be less common than loo-CHEE-uh. In fact I’ve noticed a lot of Australians seem to think loo-SEE-uh is a mispronunciation of loo-CHEE-uh!

A friend in Brisbane tells me that everyone she knows says LOO-sha, because that’s how the exclusive suburb of St. Lucia in Brisbane is pronounced. It’s named after the Caribbean island, which is why it has the same pronunciation.

From my extremely unscientific polling of friends and relatives in different parts of the country, loo-CHEE-uh is the most common by far, then loo-SEE-uh, then LOO-sha – except in Queensland where LOO-sha seems most common.

Of course, once you are introduced to a Lucia and she says her name aloud, you automatically say it the way she does. It shouldn’t really need to be “corrected” unless you see her name written down first (on a class list, for example) and have to guess the pronunciation.

I think it is a name where you have to get good at introducing yourself clearly and firmly so people immediately understand the way you want it said. It’s also a name where if you travel around the world, you would need to be tolerant of people saying your name in different ways. I do think pronunciation might be an issue (unless you’re in Brisbane), but hopefully not to the point where it really bothers you.

You’re right that Lucia is not a very literary name. Like you, the first two things I think of are the Lucia from Mapp and Lucia, and Lucia di Lammermoor. For the uninitiated, the character from Mapp and Lucia is named Emmeline Lucas, so Lucia is a nickname from her surname. She uses the Italian pronunciation, which the author E.F. Benson seems to suggest is rather pretentious for an English person.

There’s a Lucia in the fantasy novel series Falling Kingdoms by Morgan Rhodes. She is a beautiful princess with great magical power, and the novels link her name with the meaning of “light”. There’s a mildly icky quasi-incest plotline.

Chick-lit novel Lucia, Lucia by Adriana Trigiani is set in post-war New York. Lucia is an Italian-American girl with a passion for fashion, but it’s the 1950s so good luck with those career aspirations.

In Lucia’s Eyes by Arthur Japin is a historical novel about an Italian servant girl who is the first lover of the famous Casanova. That leads almost directly to international prostitution, and a hideous facial disfigurement doesn’t seem to be a barrier to her profession.

The Lucia Chronicles by Jennifer L. Kelly feature Lucia Giroux and are set in a dystopian near-future in the United States. The name Lucia is again linked with the theme of “light”.

The trouble with all these namesakes is none of them are particularly positive. Emmeline aka Lucia is comically, even lovably, ghastly, while Lucia di Lammermoor goes mad and stabby. None of the others have great experiences, with incestuous love, broken dreams, a poxy face, and destroyed illusions in store for them. Lucias in books are clearly in for a tragic time.

Better to concentrate on the name’s other attributes. It’s pretty and elegant with a beautiful meaning and tons of nickname options, and is fashionable yet still underused. Isn’t that enough?

UPDATE: The baby was a girl, and her name is Margaret!

(Picture shows an artist’s impression of Lucia from Falling Kingdoms)