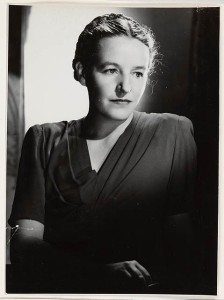 The most popular girls names of the 1940s were Margaret, Patricia, Judith, and Helen, but what were the least popular names? Here are ten names which were only chosen once in any year between 1944 and 1949 in South Australia, making them unique names for their time and place. They continue to be rare, and some parents will still find them appealing.

Avis
Thought to be a Latinised form of the Germanic name Aveza, most likely a long form or elaboration of the familiar Ava. Introduced to England by the Normans, it was reasonably common in the Middle Ages, and quickly became associated with the Latin word avis, meaning “bird”. Avis Rent a Car was founded in the 1940s by Warren Avis, but did not become big in Australia for some time – it’s now quite difficult to disassociate the name Avis from the rental company, although it’s very much on trend and still seems contemporary and pretty. It was also a good fit in the 1940s, when names such as Avril and Averil were fashionable.

Bunty
An old British term of endearment, dating back to perhaps the 17th century. In Scotland, buntin means “short and plump”, while in Wales, bontin means “the bottom, the rump” (a part of the body usually seen as quite plump). It’s interesting that in both Scottish and English dialect, bunt and bun refer to a rabbit’s tail, which recalls the bottom meaning. You probably remember the nursery rhyme, Bye Baby Bunting, where bunting meant “a plump little child”, and it’s amusing that they have “a rabbit skin to wrap the Baby Bunting in”, given the etymological connection between chubby babies and bunnies’ bottoms. By the 19th century, bunty was a country word for a lamb, because they bunt (or butt) with their heads, giving bunty another adorable baby-related association. The name Bunty was popularised by the Scottish comedy Bunty Pulls the Strings, which was a hit in 1911 in the West End and on Broadway (Bunty was a canny Highland lass). However, even before this, Bunty was used as a nickname, especially by the aristocracy. It was occasionally given to boys, and in Seven Little Australians, young John is called Bunty, because he is prone to be greedy and a bit overweight. In his case, the nickname literally meant “little fatty”, but Bunty can be understood as “cute wee bairn, bonny babe”. This could be a charming vintage-style nickname, and if you’re worried it’s too infantile, Babe and Baby were both used as names in the 1940s!

Cosette
Cosette is one of the main characters in Victor Hugo’s Les Misérables, considered one of the greatest novels of the 19th century. In the novel, Cosette is the daughter of Fantine, a poor girl who must leave her child in the care of some innkeepers, while she works to provide for her. Cosette is badly treated by her guardians, and becomes a Cinderella-like figure, but is rescued by the ex-convict Jean Valjean. They take refuge in a convent, where Cosette develops into a beautiful young girl, and eventually finds her happy ending. Cosette’s real name is Euphrasie (meaning “good cheer”), but her mother’s pet name for her is the one which sticks – Cosette is from the French word chosette, meaning “little thing”. Les Misérables was made into a successful film in 1935, with child star Marilyn Knowlden in the role of the young Cosette; this would have increased interest in the name. Les Misérables was made into an award-winning musical film in 2012, this time with British actress Isabelle Allen playing young Cosette. Her face was used for the publicity posters, and with her arresting blue eyes, this may bring Cosette into the baby name spotlight again.

Dymphna
Anglicised form of the Irish name Damhnait, meaning “fawn”. Saint Dymphna is a 7th century Irish saint with a truly disturbing story, because legend has it that when she was fourteen, her father went mad and developed an unnatural desire for her. She ran away and devoted herself to helping the sick and the poor, but her father discovered her whereabouts, and killed her in a rage. Called the Lily of Eire, Saint Dymphna is the patron of the mentally ill, as well as vctims of incest, and many miraculous cures have been claimed on her behalf. A famous namesake is the author Dymphna Cusack, and another is Dymphna Clark, married to the historian Manning Clark, so the name has strong Australian credentials. Despite this, and the pretty meaning, Saint Dymphna’s tragic life has probably not been a help. Said DIMF-na, Dymphna has a lovely sound though, like a quirkier Daphne.

Jinx
According to superstition, a jinx is something, or someone, who brings bad luck, often without meaning to. The word is American English, first used in the context of baseball, and its origins are obscure. One suggestion is that it comes from the 1887 musical comedy Little Puck, which had a character named Jinks Hoodoo, who is a curse to everyone he meets, as well as to himself. Although Hoodoo is fairly obviously a “bad luck” word, Jinks is just a surname based on the name John, and not too unusual as a first name. Perhaps it was given with the phrase high jinks in mind, meaning “boisterous fun”. After the popular musical comedy, jinks and jinx seem to have rapidly come into use as slang terms to describe an unlucky person or object. Jinx was known as a girl’s name in the 1940s because of Jinx Falkenburg, one of the highest-paid cover-girls of the 1930s and ’40s – an early example of a supermodel. Considered one of the most beautiful and glamorous women of her time, she was also a talented sportswoman and Hollywood actress, and went on to have successful chat shows on radio and TV. Born Eugenia, her mother nicknamed her Jinx in the belief that it would bring her good luck – I’m not sure how that was meant to work, but Jinx did indeed have a fortunate life. Jinx has quite often been used as a name for (mostly female) fictional characters, from L’il Jinx from the Archie comics to Jinx Johnson in the James Bond film, played by Halle Berry. This is a playful modern nickname for the non-superstitious.

Marigold
The flower name marigold is attached to several plants with yellow blooms, but usually refers to the Calendula or pot marigold – although sometimes called English marigold, the plant probably originated in southern Europe, but became widely naturalised elsewhere from an early date. The name seems to have been first used for the wildflower Caltha palustris, also known as marsh marigold and kingcup. Marigold literally means “Mary gold”, and the name came about because the spring wildflower was a favourite in medieval churches at Easter, a tribute to the Virgin Mary. Shakespeare refers to the “golden eyes” of “Marybuds” in his play Cymbeline, and the marsh marigold is one of the UK’s most ancient plants, being an Ice Age survivor. Marigold has been used as a name since the 19th century, when flower names were fashionable, and is a hip underused floral choice which could honour a Mary.

Rilla
Rilla Blythe is the main character in L.M. Montgomery’s Rilla of Ingleside; the daughter of the famous Anne Shirley (later Anne Blythe), she is a carefree teenager who must grow up fast when World War I is declared. Rilla’s full name is Bertha Marilla, with her middle name in honour of Anne’s strict but loving adoptive mother, Marilla Cuthbert. Marilla may be a short form of Amaryllis or an elaboration of Mary, and it’s notable that the name Marilla was used more than once during the 1940s. Perhaps the wartime courage of Rilla Blythe struck a chord during World War II, or maybe the 1939 publication of Anne of Ingleside played a role, where Rilla is said to be sweetest baby of all, and shown as an adorably pretty and plump lisping toddler. Rilla is a trendy name from the wartime era that still seems cute, especially knowing Rilla Blythe was affectionately known as “Rilla, my Rilla”. One for Montgomery fans!

Thais
Thaïs of Athens was a famous Greek hetaera who accompanied Alexander the Great on his campaigns. Hetaera were high status courtesans; educated, influential, and sophisticated women who were paid companions to men – not just in the bedroom, but as stimulating conversationalists and talented musicians and dancers. Thaïs was the lover of Ptolemy I Soter, one of Alexander’s generals, and she is said to have been witty and entertaining company. After Alexander’s death, Ptolemy became the king of Egypt, and Thaïs was his wife, or at least a high ranking concubine, and mother of his children (he had other wives to provide him with heirs to the throne). Saint Thaïs was from 4th century Egypt, a beautiful and wealthy courtesan who repented of her life and converted to Christianity. It is hard not to wonder if her story was influenced by Thaïs of Athens, who also lived in Egypt during the 4th century. The saint inspired a novel by Anataloe France, and an opera by Massenet; as a result, Thaïs is a popular name in France. The Greek name Thaïs means “head band”, referring to the plain cloth bands that women in ancient Greece commonly wore to keep their hair in place. Like the hair covering, this name is both simple and sophisticated, with a fascinating historical namesake, and fits in with Australian name trends. The French pronunciation is rather like tah-EES, while English speakers may prefer TAY-is or ty-EES.

Unity
The word unity means “oneness”, familiar in both religious and political contexts, and used as a virtue name since at least the 17th century. It seems a rather strange choice for the 1940s, because Unity Mitford was an aristocratic English girl who was a rabid supporter of the Nazis and fervent devotee of Adolf Hitler, her close personal friend. When Britain declared war on Germany, Unity tried to commit suicide by shooting herself in the head, but survived, although permanently affected by her brain injuries. She died from an infection caused by the bullet in 1948, a controversial figure to the end. Unity Mitford was the inspiration behind evil Bellatrix Lestrange in the Harry Potter series, and it’s interesting that J.K. Rowling named her eldest daughter after Jessica Mitford, a staunch Communist and Unity’s sister. If you can get over the connection to Unity Mitford, Unity is a rather attractive name, and similar in sound to Una, which still charted in the 1940s.

Valencia
A large port city in Spain, famous for its vibrant culture and delicious cuisine. Founded as a Roman colony in the 2nd century, its name was originally Valentia, meaning “strength, valour”, in recognition of the bravery of former Roman soldiers who settled there. The name is closely related to the familiar Valentine. During the period of Muslim rule, Valencia was nicknamed Medina bu-Tarab, “City of Joy”. The name might remind you of Valencia oranges, grown in California but named after the Spanish city, which had a reputation for very sweet oranges. Valencia has long been used as a personal name in Spanish-speaking countries, but is not common in English-speaking ones. It may have got a boost from the 1926 romantic film Valencia, where the title character is an exotic Spanish dancer, played by Mae Murray. A box office success, its title song was one of the biggest hits of that year. Valencia fitted in with popular names of the 1940s such as Valerie, and still seems rather glamorous.

POLL RESULTS
People’s favourite names were Marigold, Cosette and Rilla, and their least favourite were Unity, Dymphna and Bunty.

(Photo shows Australian author Dymphna Cusack in 1945: her play Red Sky At Morning was one of few produced during the war years, and was made into film in 1944)