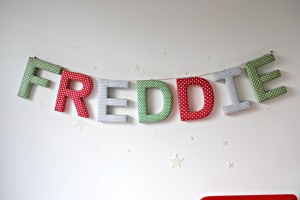 Natalie and James were expecting their first child, and wrote in to the blog because they weren’t sure what they were going to call their son.

By the time Nat and Jamie got to the hospital, the name Jasper was their front-runner, even though Jamie had originally vetoed it. However, once their little boy was born, Jasper didn’t seem to suit him after all, and so they named him

Frederic was another name that Nat had really liked, but Jamie had initially not been so keen on – luckily he decided Frederic was great after all. This is the second set of parents who had seriously considered the name Jasper until their son was actually born, and it’s also the second dad who vetoed a name, but then changed his mind – encouraging news!

Congratulations to Natalie and James on choosing the handsome, manly name with a handy nickname they had always wanted, and thank you to Natalie’s parents for choosing lovely Chinese middle names.