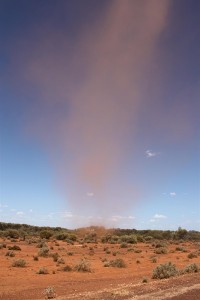 A blog reader named Tina has written in to share a story she remembers, an Aboriginal legend from the Western Desert region of central Australia.

(For the benefit of overseas readers, I should explain that the whirlwind or mini-tornado that is elsewhere called a dust devil, is in Australia a willy-willy, a word thought to come from the Yinjibarndi language of north Western Australia. Sometimes it’s called a whirly-whirly, in imitation of the Aboriginal word, influenced by the English word whirl.)

The legend goes that there was once a stunning beauty named Kirri, who fell in love with a young warrior, and he with her. However, she had already been promised to one of the Elders of her people, and the two young lovers ran away together.

Because Kirri was young and fleet of foot, she was able to stay ahead of him, but she grew more and more tired, and knew that it was only a matter of time before he caught her. She asked the Ancestors for help, beseeching them not to let her her die at the hands of the Elder.

The Ancestors took pity on pretty Kirri, and turned her into a willy-willy, so that she could keep running from the Elder without ever being caught – for now she was just a swirl of dust which whirled across the desert at lightning speed.

The Elder was angered by this interference, and begged the Ancestors to reconsider: he had been shamed, and had the right to justice. The Ancestors decided that although they had given Kirri her life and freedom, and this couldn’t be reversed, the Elder also had the right to continue the chase.

They therefore turned the Elder into a willy-willy too, but because they had already promised to spare Kirri’s life, the Elder could never quite catch up to her and kill her. The two of them were thus cursed to run for evermore, always in pursuit or being hunted down, yet never able to capture or be caught.

So when you see a twin willy-willy, where two whirlwinds seem to twirl together, you know it is the spirits of Kirri and the Elder, forever running until the end of time.

Tina thinks that the name Kirri means “fast” or “very fast”, but she has been unable to find the original story to confirm this.

If you like the names Ceri, Kairi, Kirra, Kira, Keira or Kiara, then you may like Kirri too, and it’s possible to see it as one of the sources for the name Kirrily.

Thank you Tina for sharing this story, and providing more information on the name Kirri.