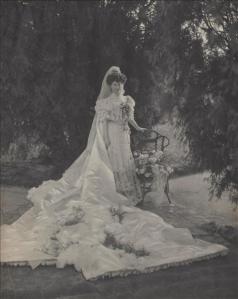 There have been many Googled requests for names from the 1900s, so this is my selection of ten girls names that were Top 100 in the 1900s which I think are usable today. I’ve tried to get a balance between names which are currently rising in popularity, and those which haven’t charted for many decades. All the data comes from New South Wales – the only state which has made public its data kept since Federation.

A variant of Amalia, the Latinised form of Germanic Amala, a pet form of any name beginning with Amal-, and meaning “work”. This was one of the many names introduced to Britain by the Hanoverians; part of its easy acceptance was that it was considered a variant of the unrelated Emilia, and indeed Princess Amelia of Hanover was called Emily in everyday life. In the 1900s, Amelia was #95, and it had left the Top 100 by the following decade. It has been on the rankings almost continuously, dropping out in the 1940s and ’50s. Rejoining in the the 1960s, it grew steadily in popularity, until it was in the Top 100 by the 1990s. It’s currently stable at #10. Famous Australians named Amelia include Amelia Best, who was one of the first women elected to the Tasmanian House of Assembly, and opera singer Amelia Farrugia. Amelia was under-appreciated for many years, but is now extremely popular, with a host of nicknames such as Amy, Melia, Millie, Mia and Lia. Pretty and unpretentious, it has a ready-to-wear quality that makes it a handy choice.

A short form of the name Elizabeth, in use since the 16th century. The name Bessie was #78 in the 1900s, and grew in popularity during the 1910s. It took a nosedive in the 1920s, left the Top 100, and hasn’t been in the rankings since the 1940s. Famous Australians named Bessie include portrait painter Bessie Davidson, who was celebrated in France in the pre-war era, and Bessie Guthrie, a designer of the 1920s who was an ardent feminist and early proponent of solar energy and ecological balance. She founded the Viking publishing house, and in later life was a crusader for the rights of abused children, before finally, in old age, being able to join a movement of feminist political protest she had waited all her life for. Bessie is such a sweet yet spunky name for a girl, and one I saw recently mentioned as having been given to a baby in 2011. I think it’s one which is ready to shed its “old lady” image and be used once more.

Based on the Old English name Eadgyð, meaning “rich war”, this was popular amongst Anglo-Saxon royalty; Saint Edith was the illegitimate daughter of King Edgar the Peaceful, and Edith of Wessex was the wife of King Edward the Confessor. Unlike many Anglo-Saxon names, it remained in use after the Norman Conquest, and didn’t fall out of favour until the 16th century. It was revived in the 19th century by the Victorians. The most famous Australian with this name was Edith Cowan, the social campaigner and first woman elected to parliament; she was part of the group which helped give women the vote in 1899 (her picture is now on the $50 note). The name Edith was #16 in the 1900s, and remained Top 100 until the 1940s, leaving the rankings in the 1970s. Very recently, it has had a revival, and is now increasing in popularity in the 500s. Strong, patriotic, and still aristocratic-sounding, it’s fast becoming a fashionable favourite. The short form Edie seems to be even more popular.

This name was introduced to England by the Normans; it may come from the Old Norse word for “work”, or be related to the Norse goddess of youth, Iðunn. Folklorist Jakob Grimm theorised that her name may come from idis, a divine female being in Germanic mythology, meaning “respected woman”. Ida died out in the Middle Ages, but was revived in the 19th century. This may have been partly inspired by Alfred, Lord Tennyson’s poem on female education, The Princess, where the heroine is named Ida. Gilbert and Sullivan parodied the poem in their operetta, Princess Ida. Tennyson probably took the name from Mount Ida; there is one in Crete and one near ancient Troy, and both were sacred to the Mother Goddess Rhea or Cybele. According to K.M. Sheard, the name is from the Greek for “woodland”. Ida was #42 in the 1900s and fell rapidly, leaving the Top 100 in the 1920s. It hasn’t been on the charts since the 1950s. Ida Standley was a pioneering schoolteacher in Central Australia. Ida is similar to popular names such as Ivy, Eva and Ava; it can also be used as a form of the Irish name Ita.

This variant of the Arabic name Layla was introduced to English-speakers by Lord Byron, who used it in his poems The Giaour and Don Juan. In Don Juan, Leila is a little Turkish girl rescued and adopted by the hero; in The Giaour, Leila is a member of a Turkish harem who falls in love with a non-Muslim, and is punished for adultery by being sent to a watery grave (vampires also get a mention). As such, it seems exotic, romantic, Gothic, and literary. Leila was barely Top 100 in the 1900s at #99, but has remained in continuous use, although very rare in the 1950s and ’60s. It’s never managed to join the Top 100 since, but has been climbing sharply since the 1990s, and is currently only just outside it in the very low 100s. Famous Leilas include Leila Hayes, who was in soap opera Sons and Daughters, and Leila Mackinnon, Channel 9 journalist. Leila fits perfectly with current related favourites Layla and Lila, and I wouldn’t be surprised if it was back in the Top 100 soon. Pronunciations vary, and as far as I’m aware, LAY-luh, LY-la and LEE-la are all considered correct.

A Latinate feminine form of Louis, this was another name introduced to Britain in the 18th century by the Hanoverian royal family. The most famous woman named Louisa from Australian history is undoubtedly Louisa Lawson, the mother of national poet, Henry Lawson. A poet and publisher in her own right, Louisa was also a leading feminist who was called The Mother of Suffrage in New South Wales, and helped bring women in her state the vote. It is generally believed that she is the prototype for all the kind, capable, and hard-working country women who appear in Henry Lawson’s stories. Louisa manages to be a classic, remaining constantly on the charts, while being underused, for it has not been Top 100 since the 1900s, when it was #79. It’s currently around the #500 mark. You really can’t go wrong with Louisa – it’s never been in vogue, yet never been out of style either, so it doesn’t sound old-fashioned. It’s pretty and sensible, and honours one of Australia’s heroines. Nicknames can range from brisk Lou, to cutesy Lulu, and anything in between.

This is another form of Matilda. The Old Germanic Mahtild became Maheud in Old French, and Anglicised as Maud. Matilda was thus the Latin and written form of the name, while Maud was the way the name was said aloud. For example, Matilda of England, the first female ruler of the English kingdom (her reign was brief), was known as Maud in everyday life. Although the name may remind you of the word maudlin, that is actually from the name Madeline (its original pronunciation). Maud became rare at the end of the Middle Ages, but was another old name which Alfred, Lord Tennyson helped revive, due to his tragic and enigmatic love poem, Maud. Maud McCarthy was a nurse who served with distinction during the Boer War and World War I, receiving several medals. Maud was #94 in the 1900s, and slipped off the Top 100 the following decade. It hasn’t charted since the 1930s. It’s a genuine antique, and if you are determined on Maddie as a pet name, Maud would make a far more distinguished “proper name” than Madison.

Myrtles are graceful, fragrant flowering evergreen bushes, which in ancient times were sacred to Aphrodite or Venus, the goddess of love. Perhaps because of this, they are traditionally included in wedding bouquets; they are always used at weddings amongst the British royal family, a custom began by Queen Victoria. Myrtle has been used as a name since the 19th century, when other flower and plant names became the fashion. A famous person with this name is Myrtle White, who wrote books describing her life on a remote outback station. Myrtle was #47 in the 1900s, and had left the Top 100 by the 1930s. It hasn’t charted since the 1950s. I added Myrtle to the list, not only because we have myrtle species native to Australia, but because Baz Luhrman’s remake of The Great Gatsby will be released soon. There is a character named Myrtle in it, and this may give the name a new image than that of Moaning Myrtle from the Harry Potter books and films.

Pearls are produced by molluscs such as oysters and mussels; they are essentially calcium carbonate or limestone in crystalline form. Ones occurring naturally in the wild are very rare, so that they are considered extremely valuable gemstones. Pearl became used as a name in the 19th century, when other gemstone names became fashionable. It probably also had religious connotations, because pearls are mentioned in the Bible, and Jesus compares the Kingdom of Heaven to “a pearl of great price”. Australia still has a significant pearling industry in Broome, Western Australia. A famous Australian with this name is Pearl Gibbs, an Aboriginal leader and activist who focused on women’s and children’s rights. Pearl was #87 in the 1900s, and left the Top 100 the following decade. It did not chart in the 1960s and ’70s, but staged a comeback in the 1980s, and has been climbing precipitously in recent years. It’s currently in the mid 200s, and this name from the sea still has plenty of lustre. It’s similar to the more popular Ruby, but seems more delicate and lady-like.

A variant of the Latin Silvia, meaning “of the woods”. The mother of the legendary Romulus and Remus was called Rhea Silvia (Rhea of the woods), because it was supposedly in the woods that she was seduced by the god Mars. Saint Silvia was the mother of Pope Gregory the Great, famous for her great piety; according to her portrait made during her lifetime, she was beautiful with large blue eyes. A common name in Italy, Silvia was introduced to England by Shakespeare, in his play The Two Gentlemen of Verona. Famous Australians with this name include Sylvia Harper, a tennis champion of the 1920s, and Sylvia Breamer, who was a Hollywood actress from the silent film era. Sylvia is a classic which has never left the charts. It was #58 in the 1900s, and didn’t leave the Top 100 until the 1950s. It hit its lowest point in the early 2000s, and is currently gently rising in the 500s. It’s lovely seeing this pretty name gaining in use; it almost seems like a nature name, because of its woodsy meaning and silvery bell-like sound.

(Photo used is of a bride in 1906; image is held by Culture Victoria)