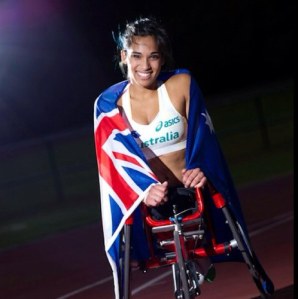 Amber Meritt was born with a club foot, and is originally from England; she came to Australia as a child (she’s now 19). She started playing wheelchair basketball in 2007, and won silver at the London Games. Amber is fossilised tree resin, and since prehistoric times has been valued as a gemstone. The word amber is derived from Arabic, and means ambergris, the waxy substance regurgitated by the sperm whale; it was only later realised these were different substances. Amber has been used as a girl’s name since the 17th century, but wasn’t popular until the 20th. The name became notorious in 1944, when the racy historical romance, Forever Amber, was published, with its heroine the sleep-her-way-to-the-top Amber St. Clare. Despite being condemned, and even banned here until 1958, the book was a bestseller, and made into a film. Amber was in rare use in the 1950s, and during the 1960s made #647 (about one Amber per year). It absolutely skyrocketed during the 1970s up to #135, peaked in the early 2000s at #49, and is now #91. This pretty gemstone name is still popular, and it’s all thanks to a “dirty” book! If looking for a nickname, Miss Merritt goes by Bambi.

Danae Sweetapple was blind from birth, and started swimming in 1990. She won a silver and two bronzes at the 1992 Paralympics. In Greek mythology, Danaë was a Greek princess and the mother of the hero Perseus. Her father shut her up in a bronze tower due to a prophecy that he would be killed by her son, but she was impregnated by Zeus, who came to her in the form of golden rain. The king had Danaë and Perseus cast into the sea, and they washed ashore onto an island, where a kind fisherman raised Perseus as his own son (as an adult, the prophecy was fulfilled when Perseus did kill his grandfather). Getting it on with a godly shower of gold was either supremely satisfying or very traumatising for Danaë, as she had no interest in mortal men afterwards, and never married or had further children. Her name is derived from the Danaans, one of the names the Greeks used for themselves, with the idea that they were partly descended from Danaus, a mythical prince of Egypt. I’m not sure how the Greeks would have said her name (nobody seems to agree), but not like the way it is usually said in Australia, which is dan-AY.

Elaine Schreiber won a bronze in table tennis, a gold in club throw, and a silver in javelin at the 1964 Paralympics, and a silver in table tennis at the 1968 Games. Elaine is a name shared by several characters in Arthurian legend, who are occasionally confused with each other. One of the most famous is the fair Elaine of Astolat, who dies of unrequited love for Sir Lancelot. The story inspired Tennyson’s poem, The Lady of Shalott, and it was only after the popularity of his poem that Elaine became a commonly-used English name. Elaine is an Old French variant of Helen. Elaine was #254 in 1900, joined the Top 100 in the 1920s, and peaked in the 1930s at #18. It left the Top 100 in the 1960s, and reached its lowest point in the late 2000s, when it was in rare use. Since then, it has been very gently rising, and is currently #457.

Gloria Pascoe developed epilepsy at the age of 9, and became totally blind by 55. At 61, she attended the 1980 Paralympics, where she took gold in lawn bowls. Gloria is the Latin for “glory, fame, renown”, and in Christian tradition it denotes the manifestation of God’s presence, often associated with a divine light. The name Gloria has been in use since at least the 16th century, but received a boost in popularity in the 19th from two literary works. One was Gloria, a romantic novel by popular American novelist E.D.E.N. Southworth in 1891; the other was George Bernard Shaw’s 1897 comedy of errors, You Never Can Tell. Both these works feature very attractive heroines who seem to have done the name more good than all of God’s glory. Gloria was #257 in 1900, Top 100 by the 1920s, and peaked in the 1930s at #23. It left the Top 100 in the 1960s, and hit its lowest point in 2009 when it was in rare use. Since then it has risen again, and is currently #427. If you’ve been paying attention, you will see this makes it the virtual twin of Elaine in terms of popularity.

Jemima Moore became paraplegic at the age of 6 from a virus, and is now 20. She won a silver medal in the 100 metres relay at the 2008 Paralympics, and attended the London Games. In the Bible, Jemima was the eldest of Job’s three daughters, and she and her sisters are described as being the fairest in the land. The name Jemima literally means “warm” in Hebrew, and can be translated as “day”. The name could actually be derived from Arabic, as there is an ancient land in Arabia who had a queen called Jemama; if so, Jemima from the Bible could be inspired by the queen of Arabic folklore. This does fit in with the Biblical story, because Job and his family were said to be from an Arabic country. The name Jemama means “turtledove”. It first charted in the 1960s, the same decade children’s show Playschool first broadcast, which has a rag doll named Jemima. Never in the Top 100, it peaked at #196 in the late 2000s and is currently #254 and stable. This is a fashionable name which has never gained popularity or lost cachet.

Lorraine Dodd became paraplegic at the age of 13, after contracting transverse myelitis. She attended the 1968 Paralympic Games, where she won three golds for swimming, and a silver and a bronze in athletics. Lorraine is a region in north-eastern France; its name comes from an earlier kingdom named Lotharingia, meaning “Lothar’s kingdom. Lothar I was a Frankish king and a great-grandson of Charlemagne; his name is Germanic and means “famous army”. As a personal name, Lorraine has been used since the 18th century, a century in which Lorraine first became part of France. It’s sometimes said to be a Catholic name, since St Joan of Arc was also known as The Maid of Lorraine. There was a World War I Battle of Lorraine, which probably boosted numbers, and the area’s importance during World War II reflects a peak in popularity at this time. Lorraine was in rare use in the 1900s, and reached the Top 100 in the 1930s. Peaking in the 1940s, it left the Top 100 in the 1970s, and hasn’t charted since the 1990s. You can see how Lorraine helped Lauren appear feminine, and Lauren also seems to have replaced Lorraine.

Madison de Rozario became paralysed by a rare neurological condition at the age of 3 and is now 18. She won silver in 2008 as the youngest Paralympian on the team, and was also at the London Games. Madison is a surname meaning “son of Matthew“, although in some rare cases it may be derived from “son of Maddy”, with Maddy being a pet form of Maud. It’s been used as a personal name since the 18th century, and seems to have been given almost exclusively to boys in the beginning. Although certainly used in England, it was much more common in America, where it may often have been given in honour of James Madison, the fourth president of the United States (I only found one man named Madison in Australian records). Madison is famous in baby name circles for only becoming popular, and only becoming common for girls, after the movie Splash in 1984. This romantic fantasy, a rewrite of The Little Mermaid, stars Daryl Hannah as the mermaid, who chooses her “human name” from a street sign for Madison Avenue in New York City, named after the former president – although Tom Hanks’ character tells her this isn’t a “real name”. Madison was #606 for the 1980s, with about three born each year. It then absolutely screeched up the charts to make #52 for the 1990s, and peaked in the early 2000s at #22. It sunk to #44 in 2010, then rose last year to make #41. It’s been a real success story, with its nickname Maddie fitting in with Madeline.

Priya Cooper was born with cerebral palsy, and spends most of her time in a wheelchair. She began swimming competitively while still at school, and is one of our greatest disabled swimmers, winning nine gold medals and breaking world records at the 1992, 1996 and 2000 Paralympics. She was twice team co-captain, and twice a flag-bearer at closing ceremonies. She has received many honours, and since retiring has become a spokesperson and fundraiser for several charities. Priya is an Indian girl’s name which means “dear, beloved” in Sanskrit. In Hindu legend, Priya was one of the daughters of King Daksha, a son of the god Brahma. The name is pronounced PREE-yuh, and has been rather a favourite in Australia for many years.

Siobhan Paton is an intellectually disabled swimmer who holds thirteen world records, and won six gold medals at the 2000 Olympics. She was named Paralympian of the Year in 2000, and also received an Order of Australia. Siobhán is the Irish form of the Norman-French name Jehanne, a variant of Jeanne. There were several medieval queens named Siobhán. It is said that the twentieth century popularity of Siobhan owes a great deal to the actress Siobhán McKenna, who was born in Belfast. She was most famous as a stage actress, but also appeared in King of Kings (playing Mary), Of Human Bondage, and Dr Zhivago. Ms McKenna’s son, Donnacha O’Dea, was an Olympic swimmer for Ireland in 1968. Siobhan first charted in the 1950s, and during the 1960s was #571, which represents about one Siobhan a year. Use of the name increased sharply during the 1970s and ’80s, and it peaked in the 1990s at #211. It hasn’t charted since 2009, so this is another attractive name which has never made the Top 100. Pronunciation is an issue, because the usual Irish pronunciation is SHIV-on, but in Australia it’s usually said shi-VAWN.

Usula King was a swimmer who won a silver and two bronze at the 1984 Paralympics. The name Ursula means “little she-bear”, derived from the Latin ursa (which we know from constellations Ursa Major and Minor – the Great and Little Bears). According to legend, Saint Ursula was a Romano-British princess who was sent by her father to marry the pagan governor of Armorica (Brittany). Possibly to stall proceedings, she got all bridezilla and declared that before the wedding she must go all over Europe on a pilgrimage, taking an unbelievable 11 000 virgins with her as her handmaids. On their way to Cologne, they were besieged by Huns, who had a busy day beheading the lot of them. The story doesn’t fit with any known historic facts, and one theory is that Ursula is a Christianised form of the goddess Freya. However, Cologne has a magnificent basilica dedicated to St Ursula and her companions, and a little village in Wales also has a church in their honour, in the belief that Ursula was originally from Wales (in the legend, she is from the West Country). Because of the saint, the name came into use in medieval times, and got a little boost in the 20th century from beautiful Swedish actress Ursula Andress, who was the first Bond girl, in Dr No. It’s clunky by contemporary standards, but strangely alluring.