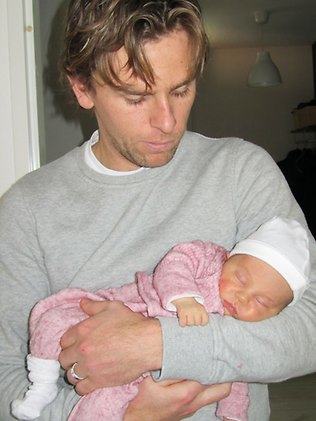 These are all the celebrity babies who missed out on being included on the blog last year (some were born before the blog existed).

Reporter and author Nick Bryant, and his wife, fashion designer Fleur Wood, welcomed their first child, Billy, in late 2010, but his birth wasn’t announced until last year. Nick was for several years the BBC’s foreign correspondent to Australia, and is now a roving reporter for that corporation. Fleur is one of Australia’s leading fashion designers, and has stores all around Australia.

Sports writer for the Coffs Coast Advocate, Brad Greenshields, welcomed his son Samuel Thomas at the start of the year (info from Twitter).

Notorious criminal Brett Maston, and his wife Rissa, welcomed their first child, Brett Junior Ronald, early in 2011. A bank robber and prison escapee who was once named Australia’s Most Wanted, Brett senior was discovered hiding out in the Philippines with his new wife and baby to avoid facing charges relating to unlawful possession of guns, ammunition and more than $90 000 in cash.

Crime widow Roberta Williams, and her fiancé Robert Carpenter, welcomed their son Giuseppe Sebastian some time in January. Roberta has Tye, aged 23, Danielle, aged 18, and Breanne, aged 16, from an earlier relationship, and daughter Dhakota, aged 9, from her marriage to Carl Williams. Carl Williams, a convicted murderer and drug trafficker, was killed by another inmate in 2010 while serving a life sentence in prison.

Actor Erik Thompson, and his wife, actress Caitlin McDougall, welcomed their second child, Magnus James, on January 2. The couple have a daughter named Eilish, aged 4. Erik plays dad Dave Rafter on the hit TV show, Packed to the Rafters. Erik was born in Scotland and emigrated to New Zealand as a child; both he and his wife came here from New Zealand.

AFL star Nick Maxwell, and his wife Erin, welcomed their first child on January 18, a girl named Milla Eve. Nick is the skipper of the Collingwood Magpies.

NRL player Mark Riddell, and his wife Karli, welcomed their first child, Harrison, in mid-January. In 2010 Mark spent a season in the English Superleague playing for the Wigan Warriors, who won the premiership. Last year he returned to Australia to play for the Sydney Roosters.

AFL player Daniel Cross, and his wife Samantha, welcomed their son Tyler in January. Daniel plays for the Western Bulldogs.

NRL star Akuila Uate, and his partner Samantha Maton, welcomed their first child in late January – a girl named Tatianna Sera Loami. Akuila plays for the Newcastle Knights, and moved to Australia from Fiji as a schoolboy; he became an Australian citizen recently. His surname is pronounced yoo-AH-tay.

AFL player Heath Scotland, and his wife Alisha, welcomed their second son, Tyler, on February 11. The Scotlands already have a son named Riley. Heath plays for the Carlton Blues.

Media personality Kellie Connolly, and her husband Adam, welcomed their third son, William Adam, in February. Their other sons are Thomas, aged 5, and Lachlan, aged 3. Kellie was a news presenter and TV host on Channel 9 for many years, and currently has a radio spot on 2GB and runs her own media consultancy.

Journalist James Chessell, and his wife Jan, welcomed their son Patrick in February; Patrick joins big sister Hannah. James was with The Australian for many years; last year he became deputy editor of the Australian Financial Review.

Soccer player Brett Holman, and his wife Femke, welcomed their first child, Emma, in early March [pictured]. Brett plays for the national men’s team, the Socceroos, and lives in the Netherlands, where he plays for AK.

NRL player Robert Lui, and his partner Taleah Backo, welcomed their son Matthias on March 8. Robert has just finished three seasons with Wests Tigers, and is signed with the North Queensland Cowboys for this year.

Singer and actor Jason Donovan, and his wife, former stage manager Angela Malloch, welcomed their third child, Molly, on March 9. Jason and Angela have a daughter Jemma, aged 11, and a son Zach, aged 10. Jason and his family live in Britain; last year he played Captain von Trapp in The Sound of Music and took part in the Here and Now concert tour.

Sports presenter Basil Zempilas, and his wife Amy, welcomed their first child, Ava Jessica, on March 9. The middle name is after Basil’s mother. Basil is a sports commentator on Seven News, and has also covered the Olympic Games. He has his own radio show on 92.9.

TV host Catriona Rowntree, and her husband, grazier James Pettit, welcomed their second son on March 11, naming him Charles Stephen. They are already parents to 19-month-old Andrew. Catriona has been a presenter on Channel 9 travel show Getaway for many years.

AFL player Liam Picken, and his partner Annie Nolan, welcomed their first child, Malachy Thomas, at the end of March. Liam plays for the Western Bulldogs.

Real estate entrepreneur Amber Werchon, and her husband, lawyer Paul McHugh, welcomed their first child, Max Hayden, on September 9. Amber is one of the youngest female real estate principals in Australia, and entered the property market at the age of 16.