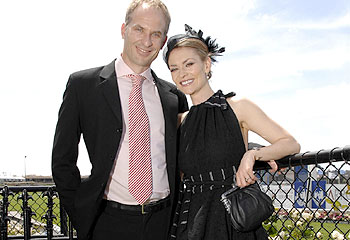 Award-winning actress Kat Stewart, and her husband, actor David Whitely, welcomed their first child on January 11 in Melbourne. They have named their son Archie Nicholas.

Kat became famous playing gangland wife Roberta Williams in Channel 9’s hit drama series, Underbelly, and plays Billie Proudman in Channel Ten’s comedy-drama, Offspring. Kat also plays a lead role on drama Tangled, on Showcase, and has appeared in the satirical :30 Seconds on the Comedy Channel. She is a member of Red Stitch Actor’s Theatre, where she has appeared in over a dozen stage plays for the company.

David is the artistic director of Red Stitch Actor’s Theatre, and a founding member. He has appeared in many of its productions, including the award-winning Red Sky Morning. David has appeared in several feature films, and taken roles in TV series such as City Homicide, The Hollowmen, Stingers, Beastmaster (US) and The Man from Snowy River.

Kat and David met through Red Stitch in 2002, and were married in February 2008.

Archie Whiteley is the first celebrity baby boy to be announced for 2012.