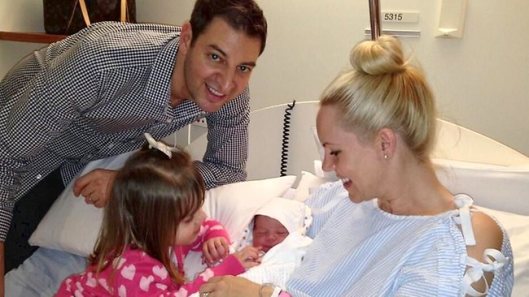 Media personality Basil Zempilas, and his wife Amy, welcomed their daughter Chloe Margaret on August 29. The middle name is in honour of Amy’s grandmother, Margaret. Chloe Zempilas weighed 3.17 kg (7 lb), and measured 50 cm long; she joins big sister Ava, aged 2. Ava’s birth was announced on the blog. ~ Thanks to Ebony for this celebrity baby tip!

Golfer Marc Leishman, and his wife Audrey, welcomed their son Oliver on August 18, a brother for Harvey. Marc currently plays on the PGA Tour, and in 2009 he became the first Australian to win the Rookie of the Year award. He won his first tournament last year at the Traveler’s Championship, becoming the second Australian to win after Greg Norman in 1995.

Tennis player Casey Dellacqua, and her partner Amanda, welcomed their son Blake Benjamin a few weeks ago. Blake’s birth was announced at the US Open, which was also the first public acknowledgement that Casey is gay and has a partner. Casey has ranked as high as 39 in the world, and won her first Grand Slam Title at the French Open in 2011, playing mixed doubles.

Soccer coach Michael Brown, and his wife Louise, welcomed their son Tyler not long ago. Michael is a coach at the Ipswich Knights.

Reality TV contestants Josh Maldenis and Andi Thomas welcomed their son Harry Joshua on August 6. Josh and Andi entered the last season of cooking show My Kitchen Rules, and withdrew from the competition when they discovered that Andi was pregnant. Tagged on the show as “dating hipsters”, Josh is a business development manager and Andi is a fashion buyer.

NRL player David Gower, and his wife Erika, recently welcomed their daughter Amelia. Amelia’s birth was announced on The Footy Show, when David and Erika took part in the “Perfect Partners” quiz segment. David has been playing rugby league professionally since 2006, and has been with the Manly Sea Eagles since this season. He has also played rugby league in England.

NRL player Craig Gower, and his wife Amanda Flynn, welcomed their daughter Freya Rose on July 23, a sister to Lola, aged 4. Freya was born just a few hours after Prince George, but because of the time zone difference, they don’t share a birthday. Craig has been playing professional rugby league since 1996, and is currently with the Newcastle Knights. He has been selected for the national squad, New South Wales, and City. Craig has also played rugby union in France and Italy. Amanda is a model, media personality, and former Penrith Panthers cheerleader. Craig and David Gower are not related, as far as I know.

NRL player Josh Hoffman, and his wife Emma, welcomed their daughter Leilani Grace in July. The middle name is in honour of Josh’s mother, Grace, who passed away unexpectedly in 2009. Josh has played for the Brisbane Broncos since 2008, and has also been selected for the New Zealand national team. He is related to retired rugby league star Wendell Sailor, and to Dane Gagai and Travis Waddell, who play for the Newcastle Knights. Emma is a registered nurse.

Cricketer Sarah Elliott, and her husband Rob, welcomed their son Samuel, known as “Sam“, about nine months ago. Sarah made her debut for Victoria Spirit during the 2000-01 season, and made her debut on the women’s national team in 2005, against England. During the Women’s Ashes series this month in England, Sarah became the first Australian mother to make a century. Rob is a cricket coach at the Northern Territory Institute of Sport, and accompanied Sarah and Sam on tour.