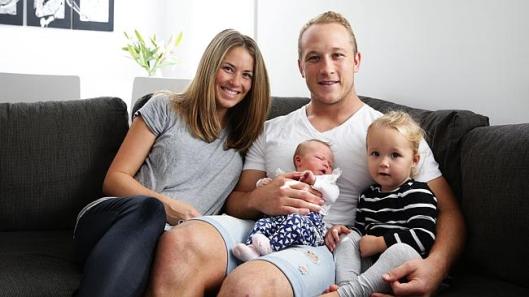 Jason Clark, and his wife Lauren, welcomed their daughter Andi on April 15, a sister for Milla [pictured]. Jason has been playing for the South Sydney Rabbitohs since 2009, and is an ambassador for the government’s Australian Apprenticeships scheme as a qualified carpenter.

George Rose, and his partner Shana Barney, recently welcomed their first child, and have named their son George after his father. It’s a family tradition, because George Rose senior is George Rose III, sharing his name with both his dad and grandfather. This season, George aptly signed with the St George Illawarra Dragons, and he joins team mate Mike Cooper in naming his son George. George has also been chosen for the Indigenous All Stars and an Indigenous Dreamtime team which played the New Zealand Maoris at the 2008 World Cup, as well as the Prime Ministers XIII. Shana is an Indigenous Australian model.

Brett Morris, and his partner Kate Milliken, recently welcomed their daughter Ellie, a sister for Emily, aged 3 and a half; Emily’s birth was featured on the blog. Brett plays for the Canterbury-Bankstown Bulldogs, alongside his twin brother Josh.

Sam Thaiday, and his wife Rachel, recently welcomed their daughter Elsie, a sister for Gracie, aged 2; Gracie’s birth was featured on the blog. Sam plays for the Brisbane Broncos.

(George, Ellie, and Elsie’s births were announced on various sporting programs on TV).