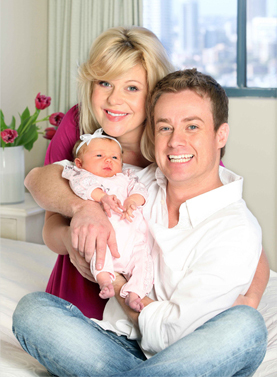 Sunrise weather presenter and motor racing driver Grant Denyer, and his wife, TV producer Cheryl Rogers, welcomed their first baby on Saturday May 7, the day before Mother’s Day, at 3.17 am at Sydney’s Prince of Wales private hospital.

Their daughter’s name is Sailor Shelley, and they were fortunate enough to have very little difficulty choosing it. Cheryl has wanted a daughter called Sailor ever since she was a teenager, when American model Christie Brinkley had a baby girl called Sailor Lee in 1998. Meanwhile, Grant has been a fan of the name Sailor since he met a little girl with that name on Hamilton Island some years ago.

“Nobody I’d ever known, except Grant, had ever liked that name or even heard of it before. So the minute she was born, we knew what to call her,” says Cheryl.

It just goes to show that your teenage baby name dreams can come true, if you are lucky enough to marry the right man!

Sailor Shelley Denyer weighed 3.5 kg and was 50 cm long at her birth, and she was born with strawberry blonde hair.

The full story and pictures can be found in the May 30 issue of New Idea magazine.