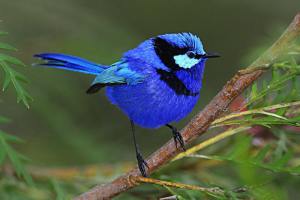 It will be Australia Day in a week’s time, and rather than cover just one name, I am suggesting names with a “blue” theme, in honour of Australia, where the phrase “true blue” has taken on its own patriotic meaning.

The name Azura is an elaboration of the colour name Azure. Azure is an intense light blue, the colour of a clear sky on a hot summer’s day. In the patriotic Song of Australia, the lyrics describe how all about is azure bright, and the bird called the azure kingfisher is native to Australia. The English word azure comes from French azur, and is taken from the blue mineral lapis lazuli – lapis means “stone” in Latin, while lazuli is from lāžaward: the Persian name for the mineral, derived from Lazhward, a place where it was mined. According to Jewish tradition, Azura was one of the daughters of Adam and Eve, and the wife of her brother Seth. Azura is a popular name in science fiction and fantasy, most notably in Skyrim, where Azura is the Lady of Twilight who rules over the realm of Moonshadow. Last year, NRL star Anthony Minichiello, and designer Terry Biviano, welcomed their daughter Azura. This is pretty and exotic while still similar to names like Arya and Zara.

The bluebell is a type of hyacinth; a spring bulb which grows wild in the woodlands of Europe and is also a popular garden plant. Its name comes from its violet-blue colour, and mass of bell-like petals. Several other unrelated flowers around the world are named bluebell, and in Australia we have the Royal Bluebell (Wahlenbergia gloriosa). This deep violet wildflower grows abundantly in the Australian Alps, and is the floral emblem of the Australian Capital Territory. Summer flowering, it is hardy and easily grown in the garden; however, it is protected in the wild, and cannot be picked or collected. Bluebell came into use as a girls name during the 19th century, along with other flower names, but doesn’t have a Victorian vintage vibe – it seems hip and funky. I have seen this a few times as a middle name, but would love to see it boldly upfront.

Delphine is the French form of Delphina, which can be understood as meaning “from Delphi”. However, the name reminds me of dolphins, whose scientific family name is Delphinidae, from the Greek delphus, meaning “womb”, to indicate that although they look fish-like, as mammals, they bear live young. The Greek town of Delphi, the home of the famous Delphic Oracle in ancient times, is also said to mean “womb”, as it was meant to be the navel of the earth goddess Gaia. The grey-blue colouring of the dolphin suggested this name to me, and there are several species of dolphin which live in, or migrate to, the waters surrounding Australia. Since ancient times, people have been fascinated by dolphins, and there are many stories of wild dolphins rescuing people, helping surfers and swimmers in trouble, or even protecting humans from shark attacks. Their high intelligence and playful behaviour make them appealing companions, and there are several places in Australia where you can swim with and interact with wild dolphins. Delphine is a pretty dolphin-related name for anyone who loves these free-spirited sea creatures, and has Dell and Fifi as potential nicknames.

Indigo is one of the seven colours of the rainbow, a dark shade of blue. It was Sir Isaac Newton who introduced indigo as one of the colours of the spectrum, because in the mid-17th century, when he began his work with prisms, the East India Company had begun importing indigo dye to Britain, where it was used to colour clothing a deep blue. Indigo dye comes from the plant Indigofera tinctoria, native to tropical Asia, and the word indigo comes from the Greek, meaning “Indian dye”. Indigo is a rather controversial colour, because Sir Isaac Newton decided there had to be seven colours to match the seven notes of a scale and seven days of the week, and scientists question whether indigo is really a colour of the spectrum, or just the point where blue deepens. Even more confusingly, Sir Isaac Newton seems to have used the word indigo to mean the colour we call blue. Indigo has strong New Age associations, because it is seen as a particularly spiritual colour connected to psychic power. Indigo is a rather trendy girls name in Australia, a favourite choice of celebrities; rising with other Ind- names, it is #137 in Victoria.

I would not have considered this for a list of Blue Names, except that while writing it, Australian actress Cate Blanchett won a Golden Globe for her role in the film Blue Jasmine. There are about twelve species of jasmine native to Australia; these climbing vines come from tropical and subtropical areas of Queensland and northern New South Wales. The flowers are delicate and white, and have a sweet, intoxicating scent; they are both fragile and strong. The word jasmine comes from the Latinised Persian yasamen, meaning “gift from God” – there really is something quite heavenly about jasmine. The name Jasmine is a modern classic which has charted here since the 1960s, and soared during the 1970s to make the Top 100 for the 1980s. It peaked in the early 2000s at #14, and is still stable in the Top 100. It is #36 nationally, #33 in New South Wales, #28 in Victoria, #41 in Queensland, #31 in South Australia, #24 in Western Australia, #59 in Tasmania, #15 in the Northern Territory and #20 in the Australian Capital Territory.

This name occurred to me because the Royal Australian Navy winter uniform is dark blue (and the summer uniform has dark blue trim); Sailor could be used as a name to honour a family naval tradition. Sailor has been used as a first name since at least the 19th century, and was used for both sexes, although more common for boys. It received greater recognition in the 1990s, when American model Christie Brinkley gave the name to her daughter, and since then has been overwhelmingly seen as a girls name – perhaps partly because it fits in so well with the trend for names such as Kayla, Layla and Tayla. Weatherman Grant Denyer named his daughter Sailor in 2011, his wife Cheryl a fan of the name ever since Christie Brinkley’s choice. The name Sailor probably came originally from the occupational surname, in which case it can be from the German seiler, and mean “ropemaker”, or English, where it means “dancer, acrobat”, from the Norman French sailleor, meaning “dancer, leaper”. The German origin seems to be more common, and as sailors once worked with ropes, still seems to fit as a sailing name.

A Greek name meaning “sapphire”, which simply means “blue stone”. However, it is likely that the ancient Greeks were referring to lapis lazuli when they used the word – it comes from the Hebrew sappir, meaning “lapis lazuli”. In the New Testament, Sapphira was an early Christian who, along with her husband, was struck dead for concealing money from the church and lying about it. It’s hard not to think that they were executed, although the Biblical account is vague on the details. It’s one of the creepier and more troubling parts of the Bible, and doesn’t really show the early church in a good light. A more pleasant connection is the intelligent and loyal blue dragon named Saphira in Christopher Paolini’s Inheritance series of fantasy novels. Crime novelist Tara Moss chose the name Sapphira for her baby daughter in 2011, apparently because she had blue eyes. Sapphira is an exceptionally beautiful and elegant name which can also reference the sapphire mining trade in Australia.

The atmosphere as it appears from Earth; the word comes from the Norse word for “cloud” (you can see our ancestors came from a place where skies tended to be cloudy!). On a clear day the sky appears blue because air scatters blue sunlight more than it scatters red. Because of this, we give as a truism that the sky is blue, even though it appears in a range of colours depending on the conditions, and there is a colour named sky blue because of that. Blue skies are symbolic of happiness and good times ahead, and blue skying is to think creatively – to think that the sky is the limit, to reach for the sky. Although there are blue skies all over the world, in Australia the strong sunlight and lack of cloudiness mean we see a lot of blue sky, and intensely blue skies – the patriotic song Awake! Awake, Australia! mentions our “bright blue skies”. Sky is a unisex name which has never charted in Australia, but its similarity to Skye and Skyla will make it seem feminine here.

An English word which can be understood as meaning “genuine, trusty, faithful”, ultimately from an ancient root meaning “steady, firm”. A common saying in Australia is to describe someone as a true blue Aussie, as featured in the John Williamson song, True Blue. The phrase true blue goes back to medieval times, when the colour blue symbolised faith and constancy. Although theories abound as why this was so, the most likely explanation is that it’s from the blue-dyed cloth produced in the town of Coventry, famous for not fading with washing, and thus remaining “true”. Later on, the phrase became associated with the Presybterian Church, and later still, the Tory Party, and their “true blue supporters”. In Australia, far from “true blue” having these conservative associations, in the 19th century it was used to describe those working class men who remained true to their labour principles, and was thus a left-wing term. Gradually, true blue came to mean anyone loyal to Australia and its values. True can be used as a name for either sex; on a girl, it seems as if it could be short for Trudy and similar names.

Australian wrens are similar in appearance, but unrelated to the wrens of Europe and the Americas. In some species, such as the Superb Fairywren and Splendid Fairywren, the breeding male has a very distinctive and beautiful blue plumage in contrast to the grey-brown tones of the females and juniors. In other species and subspecies, both males and females are bright blue, or have blue patches. Because they are tiny, pretty, and have an attractive range of birdsongs, we love it when fairywrens visit our gardens. Seeing a group of colourful wrens flutter through the bushes is the closest thing to having fairies in the garden that most people will experience. Another charming fairywren fact is that the male will present brightly coloured flower petals when courting a female, which to human eyes looks like bringing a bouquet of flowers. Wren has been used as a first name since the 17th century, and from the beginning was unisex, given roughly equally to both sexes, and possibly influenced by the surname, which comes directly from the bird. Today it is usually thought of a girls name, and although I can see it on a boy, the fairywren seems to render it more feminine than masculine. Elsewhere Wren might seem a humble choice as a name, while here I think it’s much brighter and more cheerful.

POLL RESULTS
The public’s favourite names were Wren, Indigo and Delphine, and their least favourite were Sailor, True and Sky.