When I decided to call my blog Waltzing More Than Matilda, I wasn’t prepared for the number of people who would come here searching to find out more about the name Matilda. Every once in a while, the number of searches builds up to the point where I start feeling guilty that I’ve lured people to my blog under false pretenses, and I answer their questions. These are specifically about Waltzing Matilda.

What are the words to Waltzing Matilda?

That’s a harder question to answer than you might think, because there aren’t any “official” lyrics, and there are a few slightly different versions. You can see Banjo Paterson’s original version here.

Yes – it has an ABCB rhyming pattern, so that the second and fourth lines of each stanza are exact rhymes, and all the B lines end with a word that rhymes with bee: eg tree, me, glee, three. Mostly it’s the word me, which several times rhymes with itself.

He’s never mentioned by name, but he’s said to be based on a real man named Samuel Hoffmeister, originally from Germany, whose nickname was “Frenchy“. Presumably by the same Australian logic whereby a red-haired man will be nicknamed “Blue“.

There’s a familiar Australian witticism that the jolly swagman’s name must have been Andy: “Andy sang as he watched, Andy waited ’til his billy boiled”. As Banjo Paterson’s real first name was Andrew, perhaps a laboured attempt to put him into the song.

Can “waltzing Matilda” mean to be hung?

No – it means to travel by foot, carrying your belongs on your back. A swagman’s rolled sleeping blanket was his “Matilda”, and to “waltz” your Matilda was to take it on a long walk.

Is “waltzing Matilda” a euphemism?

Is there a Waltzing Matilda Hotel?

Yes, it’s not a particularly unusual name for hotels. Here’s an example.

I don’t think there’s even one, let alone more than one.

[Did] Ansett use [the song] Waltzing Matilda?

Yes, Ansett Australia Airlines used the song in their advertisements to mark the centenary of Waltzing Matilda in 1995. They also had a scene from the song painted on their 737s the year before, and the first 737 aircraft they ordered in 1986 was named Waltzing Matilda.

Was there ever a warship named Waltzing Matilda?

No. The Royal Australian Navy usually names its vessels after Australian place names, animals, Aboriginal words, and famous people from history, rather than works of fiction. Besides, the song ends with someone drowning, which hardly seems appropriate for a ship (although it doesn’t seem to have put other people off naming their boats Waltzing Matilda).

A 1950s horror movie which has the song Waltzing Matilda in it?

It’s not strictly a horror movie, but could you be thinking of the 1959 post-apocalyptic film, On the Beach? The song is used to great effect in a particular scene.

That’s not quite true, but it’s a complicated story. Banjo Paterson sold the rights to Waltzing Matilda to Australian publishing house Angus & Robertson for 5 pounds. Banjo died in 1941, and under Australian copyright law, as in most of the world, once the creator has been dead for 50 years, a creative work is in the public domain, so Waltzing Matilda has been copyright-free here since 1991.

A bitter pill for Australians to swallow was that they had to pay a licensing fee to Carl Fischer Music to have Waltzing Matilda played at the closing ceremony of the 1996 Olympics in Atlanta, since it was on American soil. It sounds rather mean and money-grubbing to have charged us for own anthem, probably because it was.

So Waltzing Matilda was never “owned by America”, but only by one American company. And as all good things come to an end, and all bad ones too, eventually copyright ran out in the US, which doesn’t happen until 70 years after the creator’s death, and Waltzing Matilda has been in the public domain worldwide since 2011.

If it was a national disgrace that it occurred, I can’t see that the disgrace is attached to our own nation. We didn’t steal it, and our shonky copyright laws didn’t allow it to happen.

There was a plebiscite to choose a national anthem in 1977, and more than 43% of people voted for Advance Australia Fair, while only around 28% voted for Waltzing Matilda. (Almost 19% voted for God Save the Queen, and less than 10% for Song of Australia).

God Save the Queen is our royal anthem, to be played whenever someone royal shows up. Waltzing Matilda is an unofficial national anthem, and is a particular favourite at sporting events – especially the Olympics and Commonwealth Games.

In any case, it probably wouldn’t have been a good idea to have a national anthem under copyright in another country.

[Is] Waltzing Matilda no longer sung at AFL [Grand Finals]?

I think the 1980s was the only decade where it was sung almost every year; it didn’t start out like that in the 1970s, and seems to have become hit-and-miss in the 1990s. The last person to sing Waltzing Matilda at an AFL Grand Final was probably Guy Sebastian, about ten years ago.

Some people feel outraged that this “great tradition” has been neglected, but their memories have probably made it seem more frequent than it really was. I suspect these people were children and teens during the 1980s, so that they grew up with a general impression of Waltzing Matilda being played each year.

Why did Senator [Bob] Kerrey sing Waltzing Matilda after being elected?

Robert Kerrey was elected to the US Senate for Nebraska in 1989. He didn’t actually sing Waltzing Matilda after his election: he sang And The Band Played Waltzing Matilda, written by Australian folk singer Eric Bogle.

The song is written from the point of view of an Australian soldier who loses his legs at the Battle of Gallipoli, and sees the war he participated in as bloody and futile. Because the song was written in 1971, it can be seen as a criticism of the Vietnam War, which was similarly gruesome and pointless.

Senator Kerrey served in the United States Navy during the Vietnam War, and lost the lower half of one leg in combat. He suffered some traumatic experiences during the war, and must have identified with the narrator of And the Band Played Waltzing Matilda. He also used the first line of the song for the title of his autobiography, When I Was A Young Man.

The song has been frequently covered by folk singers in the UK and the US, and is internationally famous as an anti-war song.

(Painting shown is Down on His Luck, by Frederick McCubbin – 1889)

The small town of Winton in outback Queensland has played a pivotal role in Australian literature and the development of an Australian legend, for it was at a cattle station named Dagworth Homestead, just to the north of the town, that A.B. “Banjo” Paterson wrote Waltzing Matilda, and it was set to music (based on a traditional tune) by Christina Macpherson in 1895.

Indeed, the very plot of the song is said to have been inspired by events which took place at Dagworth Homestead during the Great Shearer’s Strike of 1891, when three policemen gave chase to a swagman named Samuel Hoffmeister, who shot and killed himself at the waterhole rather than allow himself to be arrested. It is thought that Christina and her brother Bob told Banjo Paterson the story during his stay at the station.

The folklore of the song and its creation is the pride of Winton, which has its own museum, the Waltzing Matilda Centre. Waltzing Matilda received its first public performance in Winton’s North Gregory Hotel, on April 6 1895, and this year, the town of Winton held its inaugural Waltzing Matilda Day on April 6, to honour and celebrate our national song.

In fact, the town’s mayor, Ed Warren, has asked that Waltzing Matilda Day be declared a public holiday. A worthy notion, but even someone as keen on holidays as me cannot help noticing we already have Easter and Anzac Day that month, so April seems a little full up.

The town of Winton was named by postmaster Robert Allen, supposedly after his birthplace in England, a suburb of the seaside town of Bournemouth in Dorset. The suburb is named after Winton Castle in Scotland, home to the Earl of Winton, a relative of local Dorset family, the Talbots. Winton Castle is near Edinburgh, and was originally owned by one of the oldest families in Scotland, the Setons; it was built in 1480 on lands the family had acquired in 1150. It is now an award-winning hotel and conference centre.

However, as it turns out, Robert Allen was actually born in Winchester in Hampshire, which was also known as Winton. This lovely cathedral town’s name is a mixture of British-Roman and Anglo-Saxon, and means “market town”.

The surname Winton is famous in Australia as belonging to Western Australian novelist Tim Winton. He has won a swag of literary prizes, including the NBC Banjo Award for Cloudstreet. He has been named a Living Treasure by the National Trust, and awarded the Centenary Medal for services to literature and the community.

While writers who have found literary acclaim aren’t always popular with the ordinary reading public, nearly everyone I know who reads at all lists Tim Winton as one of their favourite authors. He manages to combine wonderful storytelling with a uniquely spare prose style

As well as writing and winning awards, Tim also finds time to support the environmental movement. As a patron of the Australian Marine Conservation Society, he has raised awareness about sustainable seafood consumption and campaigned against shark finning; he is also patron of Stop the Toad Foundation and has contributed to The Last Whale website. He has been prominent in the campaigns to save Moreton Bay and Ningaloo Reef.

Mr Winton writes novels for grown ups, and also children’s books, most notably the Lockie Leonard stories, about young surf rat Lockie who moves from the city to the coastal south-west of Western Australia (probably not coincidentally, this is exactly what Tim Winton did when he was twelve). The TV series based on the books is filmed in Albany, where Tim grew up, and has also won a stack of well-deserved awards.

The English surname Winton can come from Winton in Lancashire, whose name means “willow wood farm” – a place where willow trees were farmed for their extremely useful wood. Winton in Westmoreland, however, means “Wina’s pasture”. The name Wina meant “friend” in Old English. It is from this personal name that Winton Castle in Scotland is also named, which seems to have brought us full circle.

I saw the name Winton on a baby boy who competed in the Bonds Baby Search. It’s very similar to the aristocratic Winston, yet with its own connections to the world of Australian literature, the Australian coast and the Australian outback. It seems like an unusual yet stylish choice. 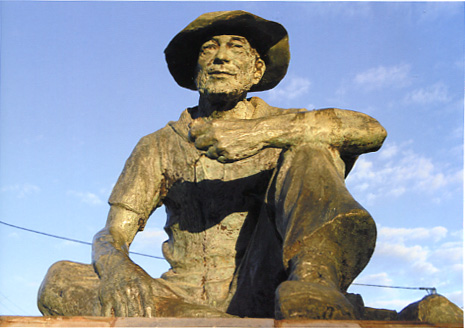 (Photo above shows the statue of the Jolly Swagman in Winton, sculpted by Daphne Mayo)