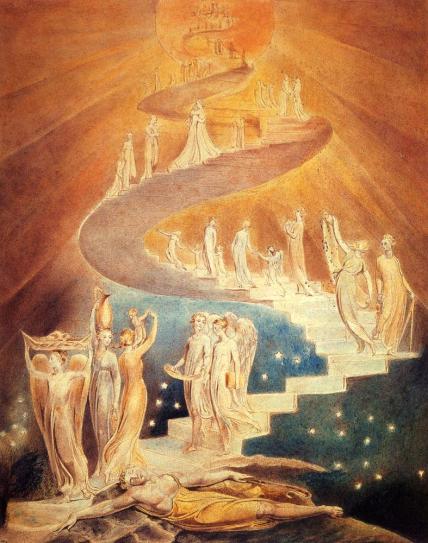 Biblical Namesake
In the Old Testament, Jacob was the son of Isaac and Rebecca, the grandson of Abraham and Sarah. He had a twin brother named Esau, and it was said that the two of them fought for supremacy even in the womb. Esau was born first, with Jacob following so close behind he was holding his brother’s heel.

As they grew older, the twins developed very different personalities and even appearances – Esau was a hunter and exceptionally hairy, while Jacob was smooth-skinned and home-loving. Esau was Isaac’s favourite son, while Rebecca preferred Jacob.

While he was literally as hungry as a hunter, Esau was convinced by his younger brother to sell him his birthright as eldest for a bowl of red lentil stew. By disguising himself as Esau by covering himself in animal hair, Jacob also obtained a blessing from their blind father Isaac; the blessing made him ruler over his older brother Esau.

To get him away from his now murderously angry brother, Jacob was sent to work for his uncle. On the way, he had a dream or vision of a ladder or staircase reaching into heaven, with angels ascending and descending, while the voice of God blessed and encouraged him.

Jacob worked for his uncle as a shepherd, and married his cousins Leah and Rachel (he just wanted Rachel, but there was a two-for-one offer and he was only allowed Rachel if he took her sister as well). With these two wives, and two concubines, he eventually had twelve sons and at least one daughter.

On the way back home with his family, Jacob had a mysterious encounter with a divine being, who wrestled with him all night, until his hip was dislocated. Jacob demanded a blessing from the being, who did so, and gave him the new name of Israel. It is traditionally said that the being was an angel, although Genesis suggests that Jacob wrestled with God. Jacob always walked with a limp because of the injury to his hip.

Jacob and Esau reconciled with one another, and had an emotional reunion, showing that both had matured over the years. Despite missing out on his birthright and blessing, Esau had become rich and successful, and had a large family of his own; this probably made it easier for him to forgive his twin.

Jacob is regarded as the father of the Israelites, and his twelve sons as the progenitors of the Twelve Tribes of Israel. He is venerated in Judaism as one of the great patriachs, while in Islam Yaqub is one of the prophets, upheld as an example of someone who trusted God completely. In Christianity, Jacob is revered because Jesus spoke of him, and his visions are believed to refer to the coming of Christ. He is regarded as a saint in Catholic tradition.

Name Information
The name Jacob is derived from Iacobus, a Latin form of the Hebrew Ya’akov. The Bible explains the name as meaning “holder of the heel”, as Jacob was born holding his twin brother’s heel, from the Hebrew word aqab, meaning “restrain”, a play on words with the similar iqqbah, “heel”.

The name is often translated as “supplanter”, because Jacob supplanted his older brother in gaining his inheritance. You could take holding a heel as a metaphor for supplanting someone, which is the only way this particular meaning makes even vague sense.

Neither of these is very convincing – the Bible is good at coming up with clever joke explanations of what names mean, but isn’t strong on etymology.

It has been suggested that the name could be short for a hypothetical longer name, such as Ya’aqov’el, meaning “may God protect”. In a baby name book I owned by Oxford philologist Julia Cresswell (now sadly fallen to unrecognisable pieces), she offers the theory that Jacob may ultimately be from Babylonian and mean “God rewards”. Unfortunately, I don’t remember her giving a source for this information.

So we know that Jacob is a name with very old roots, but the exact meaning of it cannot be recovered. It seems more likely to me that the meaning has something to do with God rather than feet, but all theories are only speculative.

Jacob has been used as an English name since the Middle Ages, although not as common as its New Testament form, James. It has often been thought of as being a particularly Jewish choice, although the sheer numbers of Jacobs through history in comparison to the Jewish population make this idea untenable. There is a Saint Jacob, an early Christian martyr from Syria, and the name became rather a favourite in the Eastern church. In the form Jakob, it was commonly used in Central and Eastern Europe, and there are quite a number of medieval saints named Jakob or Jakov.

Famous men from Australian history named Jacob include Jacob Pitman, a South Australian builder and architect who was responsible for spreading the work of his brother Isaac Pitman, the creator of a common form of shorthand. Jacob Nagle was an American-born sailor who arrived here on the First Fleet and left a lively account of early Sydney, while Jacob Mountgarrett was an Irish surgeon to the early colony. Jacob Garrard was a prominent trade unionist, and Jacob Oberdoo an Aboriginal leader.

Notable Jewish Jacobs in Australia include Jacob Montfiore, a highly successful businessman, politician, magistrate, bank director, and community leader – he also wrote plays and an opera. Rabbi Jacob Danglow was senior Jewish chaplain to the army during World War II, and Jacob Bloch was the premier maker of ballet shoes in the mid 20th century (not much of a businessman, but fun-loving and popular). Jacob Goldstein was a Christian charity worker of Jewish heritage.

Jacobs Creek in South Australia’s Barossa Valley is named after an assistant surveyor called William Jacob who settled here in the 1840s. Its main claim to fame is that it has given its name to the Jacobs Creek wine brand.

In the UK, Jacob was a popular name during the 19th century and was in the Top 40 by the mid 1990s. It has been climbing since 2008, and is currently #4. Jacob is most popular in the US and UK, but is popular in all English-speaking countries, and also in Scandinavia. The Jakob spelling is most popular in Slovenia, but also charts in Austria and Scandinavia. (Most countries pronounce the name differently to how we say it).

Jacob is a strong, handsome traditional name on its way to becoming a modern classic. The stability of its popularity makes it a very safe choice, yet it is still quite distinctive. The most common nickname is Jake, but in times past Jack was used, and more recently Coby and Jay.

Thank you to Susan for suggesting the name Jacob be featured on Waltzing More Than Matilda.

POLL RESULTS
Jacob received an approval rating of 58%. 17% of people thought Jacob was a safe choice that was still interesting, but 16% saw it as boring and common, and 15% as too popular. 10% of people loved the nickname Jake, while 5% hated it.

(Painting is of Jacob’s Ladder by William Blake, 1805)