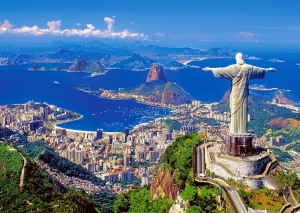 It’s been a rather controversial Olympics (although not as disastrous as the gloomy doomsayers predicted). However Rio has looked beautiful with its views of mountains and beaches, and the famous landmark of Christ the Redeemer overlooking the city and its surrounds. No wonder Rio is one of the most popular cities to visit in the Southern Hemisphere, and why Australian entertainer Peter Allen had to write a song about it!

Congratulations to all the Olympic athletes, and see you all in Tokyo in 2020!

Name Information
The Brazilian city of Rio de Janeiro means “River of January” in Portuguese, and received its name because Portuguese explorers first sailed into its bay on January 1 1502, mistakenly believing the harbour was the mouth of a river.

The city itself was founded in 1565, and first called São Sebastião do Rio de Janeiro in honour of Saint Sebastian, the patron of the Portuguese monarch. Just as the São Sebastião got dropped, the city is now often known as simply Rio (“River”).

Rio has been used as an English name since the 19th century, although it is not always possible to tell from records whether Rio was the person’s nickname. It was given to both sexes, but mostly to males, and in the US may have been influenced by the great south-western river the Rio Grande, or various places named Rio.

In fiction, guys called Rio tend to be tough and gritty, rebellious and sexy, or even butch and bullying. Female fictional characters named Rio include the heroine of the YA undersea novel Atlantia: in the book, the characters all have names connected with water, so a name meaning “river” makes sense.

Rio is also a popular Japanese girl’s name. It can be translated in a variety of ways, including “white jasmine and cherry blossom”, and “village centre of cherry blossom”. An example of someone with the name is Japanese child star Rio Suzuki. You will find the name used fairly often in anime and manga, and confusingly, sometimes for male characters too – an apparent Anglicisation of the Japanese boy’s name Ryu, meaning “dragon”.

If you tend to think of Rio as a masculine name, it’s probably because in Romance languages an O at the end of a name usually signals it’s male – Rio even looks as if it could be short for Mario. Also, the English name River is more popular for boys, so it makes some kind of sense for Rio to be as well.

If you think of Rio as a feminine name, it might be because you’re an older parent or young grandparent, and you’re thinking of the song Rio by Duran Duran where her name is Rio and she dances on the sand. In the song, the girl’s name is linked to the Rio Grande; the band have said that Rio is a symbol of their love for the United States (originally the girl in the song was called Amy, short for America, but Rio sounded more exotic so Rule of Cool won out).

Rio isn’t an unusual name in the UK. It has charted for boys since the late 1990s, around the time English football star Rio Ferdinand began playing for the national team; he went on to captain his side. The name peaked in 2008 at #155, the year after Rio Ferdinand’s autobiography was published. The name Rio is now #213 for boys, and its popularity has almost certainly been influenced by Mr Ferdinand.

Rio also charts for girls in the UK, and before Rio Ferdinand became well known, was actually more common as a female name. This is a good example of how just one high-profile person can cause a less-common name to do a gender switch. Rio has only been in the Top 500 for girls once, in 1997 – ironically the same year Rio Ferdinand joined the English national side. In 2014, 11 baby girls were given the name Rio in the UK.

Rio is less popular in the US, but more common for boys there as well. In 2015, there were 103 boys named Rio, and 38 girls. Numbers are fairly stable for both genders, but it does seem to be gradually falling for girls, and very slightly rising for boys. I have seen Rio on both sexes in Australia, but more boys than girls.

Whether you think of it as inspired by the city, or the Rio Grande, or simply an exotic nature name, Rio is a cool and spunky name for both boys and girls. It will be interesting to see if this year’s Summer Olympics will help bring about an increase in babies named Rio.

(Picture shows a view of Rio’s harbour from Mount Corcovado)

3 thoughts on “Waltzing With … Rio”