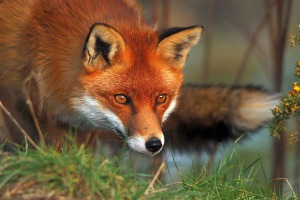 Tara and Andor are expecting their first child in a few months, and easily thought of plenty of girls names they both liked. However, they only agreed on one boy’s name that they both liked equally and felt was the right fit for them. As it happened, they discovered they were having a boy, and now that one name seems very real.

The one boy’s name they have both agreed on is Fox. Tara admits this possibly wasn’t a good idea, but she mentioned the name to her mother and sister, who were surprised by it and not very impressed.

Her mum thought it sounded “too Mills & Boone”, and was concerned that if their son had red hair (which runs in the family), the name Fox might seem rather cruel. She also didn’t like the connotations of being sly that the word fox has.

Tara’s sister just didn’t like it, as her taste in names is much more traditional. Tara is too sensible to worry overmuch about her family’s reactions, and hopes that they come around once the baby has actually been born (and is a super cute and cuddly grandson and nephew for them).

The main thing that is holding Tara back from committing to the name Fox is that the baby will have a one-syllable occupational surname, such as Clark, and she feels that Fox Clark doesn’t flow particularly well. She also wonders if it might be a bit too unusual, as Fox seems to be gaining popularity as a middle name rather than a first name.

What Tara and Andor would most like in a name is something which isn’t highly popular, and will be suitable for all stages of their son’s life. Tara likes older style names, and both of them love nature names as well. Tara is a teacher, and has ruled out many names too strongly associated with past students.

Andor has an unusual name, and both he and Tara like that it’s out of the ordinary – they both like the name Oliver, nicknamed Ollie, but have ruled it out because it’s the #1 name. Archie is also becoming a name they are seeing too often on other people’s children to keep on their list.

Other names they have thought of are Felix, Arlo, Louis, Banjo, and Sonny. Tara really likes Theodore, nicknamed Teddy or Theo, or just Theo as the full name, but she hasn’t been able to convince Andor. The baby’s middle name will be Steven, which honours a loved family member.

Tara wants to know – is Fox too short for a one-syllable surname, and is it too out there as a first name?

Last year a mum-to-be wrote in to the blog because she and her husband had agreed on only one name for their daughter – Grace. Because they had a one-syllable surname, like Cooke, she was worried that they couldn’t give their baby girl a short name to match it. When their daughter was born, they decided that Grace was the perfect name for her after all.

Just as I couldn’t see anything horribly wrong with Grace Cooke, I don’t believe Fox Clark is too dreadful. More than that, I actually like it – I enjoy that it has a snappy, brisk sound, like the bark of a fox. I also like the juxtaposition of the two nouns in the name Fox Clark, which is very evocative. The name sounds smart to me – clever and wise, rather than cunning and sly.

I found a young man on Facebook with the name “Fox Clark”, so someone else has used it. I had a very clear picture in my mind as to what someone named Fox Clark would be like, and this man (unsurprisingly!) looked completely different – and yet I at once thought, “Oh yes, he looks exactly right for a Fox Clark”. And I’m sure I could see another Fox Clark, and another, and they would all suit their name in different ways.

As to whether Fox is too unusual a name or not, that comes down to opinion. It’s certainly not a common name, but nature names and animal names are on trend, and so are names for boys ending in an X like Tex or Hendrix. The name Fox is also rising steeply in the UK and US, so I think you can safely assume there are more Foxes being born here too.

You’re right that the name is much more common in the middle, but rising names often start out in middle name territory. Parents like them, but don’t feel bold enough to use such a “different” name in the first position: not yet, anyway. Short names like Fox also appeal as middle names because they sound good with longer first names.

But what you probably wonder is whether other people will think that Fox is too weird, especially after your family’s reaction. The feeling I most get about Fox when I talk to people about it is that it’s a “cool name” – one that’s different, but in an interesting way.

If you look at people’s opinions online, so often they say Fox is a guilty pleasure name: one they wish they were brave enough to use. Sure, you might have a few people who don’t care for the name Fox, or think it’s strange, but I think there will also be some admirers, and secret admirers, out there.

Even your mum’s comment that it’s a “Mills & Boone” name suggests that she thinks it sounds sexy and bad boy. She might not like it, or perhaps thinks it’s inappropriate, but it’s interesting that she immediately connected the name to romance and fantasy. Perhaps when you met Andor, you likewise found his name intriguing: I like that Andor has an unusual name too, so it feels like the start of a family tradition.

Fox is an up and coming name that isn’t widely familiar yet. That’s an attraction for a teacher, for as yet you haven’t had many (perhaps any?) students named Fox to colour the name for you.

That means it doesn’t have an ageless quality but eventually children grow up, and their names inevitably grow with them – at some point, Arlo will be your doctor and Sonny will handle your insurance claim. Once upon a time, Clarence was a “little boy” name that people could no doubt never picture as a lawyer, journalist, or old man in a nursing home.

If you continue to have nagging doubts about naming your son Fox, perhaps you could use it as a nickname. Looking at your name list, you have considered the name Felix, which seems the easiest to turn into a long form of Fox – “His name’s Felix, but we call him Fox for short”. Really, Fox seems like the kind of name where you could choose any name you wanted and add, “… but we call him Fox”.

However, I must say I hope you decide to stick with Fox. It’s a name you both like equally, and the only name you have both agreed on so far, so it just might be the right name for you.

85% of people thought that was Fox wasn’t too weird to be usable as a baby name. 30% thought it was a bit unusual, but that others would soon get used to it. 20% didn’t think it was very unusual as it fits in so well with current trends. 15% said it was too unusual for them to use, but they would find it interesting on someone else’s child. 13% thought it was very unusual, but that was a positive thing as it made the name cool and different. 7% of people didn’t think it was unusual in the least. 11% thought maybe it was too unusual as they couldn’t imagine it on a real person, while 4% were convinced it was an extremely weird name.

13 thoughts on “Is This Name Too Short, or Too Unusual?”