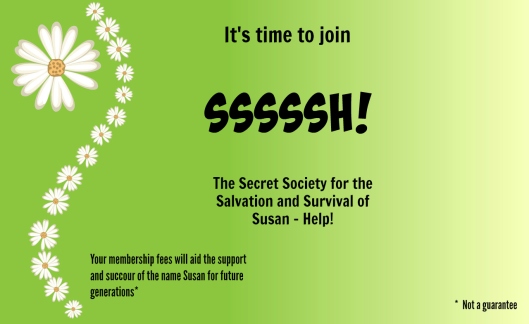 A wave of articles on “endangered” names has been flooding my inbox since last year, and eventually some poor sap from the Sydney Morning Herald with minimal interest in names got roped into providing some scary statistics for New South Wales, so now I have to cover it too.

(I know they’re not interested in names because they think Jessica is a Hebrew name meaning “rich” – it isn’t Hebrew, and doesn’t mean anything of the sort).

By accessing the Baby Name Explorer database of names in NSW from 1900 to 2011, they found that the names that were fast disappearing were John, Robert, Peter, and David for boys, and Mary, Margaret, Susan, and Karen for girls.

In the world of manufactured name problems, this is surely one of the daftest. Here is why the sudden concern over endangered names is nonsensical.

The Statistics are Wrong
John and David are still in the Top 100, which they have never left after more than a century, and the Baby Name Explorer actually shows them increasing in usage in 2011. This is surely the exact OPPOSITE of disappearing or endangered.

Mary, Peter and Robert were only just outside the Top 100 in 2011 (Mary was #101), and the graph shows that both Mary and Robert had increased usage in 2011, while Peter’s position had remained extremely stable for some time.

Margaret increased in usage in 2011, and even Karen had an uptick which brought into back onto the charts that year. Susan was the only name on the list which had actually dropped off the charts by 2011.

How did they get it so wrong? By selecting names that had been #1 for a particular decade, so that their drop in popularity would look alarmingly steep, and then completely ignoring the names’ ranking and usage.

The “resurrected” names were equally silly, with William, Jack, Ruby, and Grace cited as names which had made brave comebacks against the odds. William has never been out of the Top 50, so it can hardly be said to have ever gone away, while Jack and Grace are classics which have never been lower than #400. Retro Ruby is the only name which has ever been off the charts and returned.

Why couldn’t the article identify any names which actually were still in use yet fast disappearing? Because the Baby Name Explorer only covers the 1200 most popular names of the century, so that any name still on the charts by 2011 was getting reasonable, and often increasing, usage. You can’t make useful statistics out of insufficient data.

The Data Doesn’t Include Middle Names
Margaret may only be around the 400s as a first name, but it’s a fairly common middle name for girls – probably in the Top 100 of middle names. Dorothy may not chart any more, but it’s not unusual in the middle. It doesn’t really matter whether a name is in the first or middle position: if it’s in use either way, you can hardly claim it as disappearing or long gone.

If a plant or animal is endangered, it is very difficult to ensure its survival, and will require specialised breeding programs or seed collecting initiatives, all of which depend on funding. Losing some species may have dire consequences for the planet; for example, we need bees and beetles to pollinate our crops and plants. Worst of all, once they are all gone, we cannot bring them back – no matter how much we long for the dodo, it is done for, and nothing will return it to us.

If a name isn’t used much any more, no great calamity will result. Brangien and Althalos have been rarely used since the Middle Ages, but nobody has suffered as a result of Brangien deficiency, and no awful disaster has ensued from the loss of Althalos.

Furthermore, if we decided we’d like to see more of a particular name which has gone out of use, it costs no money or effort to bring it back. You simply slap the name onto your child’s birth certificate, and hey presto – you’ve got yourself a rare and beautiful specimen of an Althalos.

As long as we still know of a name’s existence from books and records, it is a potential baby name, no matter how many centuries or even millennia since it was last used. (Thank you Nancy from Nancy’s Baby Names for pointing out this absurdity).

I hope you can all sleep more soundly now, knowing that herds of Johns and Davids wander at will, the Mary and the Peter are gambolling freely, and numbers of Margarets and Roberts are secure for the foreseeable future. We even have high hopes for the diminished Susan, which may yet return to a sustainable population as 1950s names prepare to come back into fashion.

I do wonder what effect these kinds of articles have on people though. Does it make them more likely to “save” the “endangered” names, knowing that not as many people are using them now, or does it put people off the names even more, in the belief that they would be choosing a baby name heading for the scrapheap?

39% of people thought we should save the name Susan, while 61% believed we shouldn’t bother.

5 thoughts on “Save Our Susans and Protect The Peter: The Ridiculous World of “Endangered” Names”