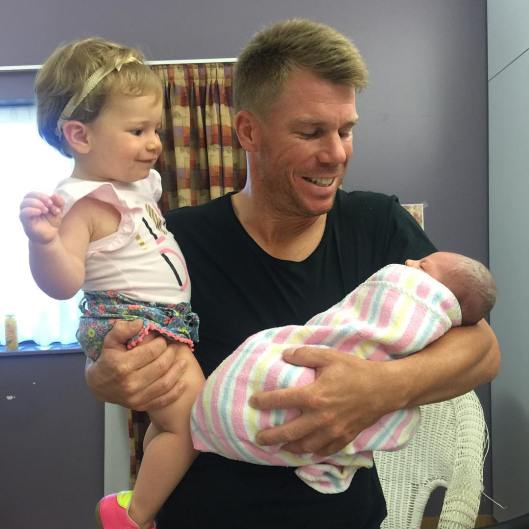 Cricketer David Warner, and his wife, Ironwoman Candice Falzon, welcomed their second child on January 14 and have named their daughter Indie Rae [pictured]. Indie is a little sister for Ivy Mae, aged 16 months, whose birth was featured on the blog.

Paralympian Kelly Cartwright, and her partner Ryan Miller, welcomed their first child on January 4 and have named their son Max William. Kelly is an athlete with a carbon fibre prosthetic leg, and won both gold and silver medals in London 2012, as well as setting a world record in the 100 metres. She was awarded the Order of Australia in 2014, and is an ambassador for the Australian Paralympic Committee. She was a contestant on Dancing With the Stars last year, and is planning to take part in the Rio Paralympics. Ryan is a firefighter.

Former netball champion Natalie Bode, and her husband Jace, welcomed their first child on January 3 and have named their daughter Maddison Anne. Natalie played netball for the Adelaide Thunderbirds, where she was captain from 2010 to 2013, and for the Australian national team, the Diamonds. She has two gold medals from the Netball World Championships of 2007 and 2011, silver medals from the Commonwealth Games of 2006 and 2010, and a bronze medal from the 2009 World Netball Series. She has won numerous awards and is in Who’s Who. Jace is an Australian rules footballer in the SAFL.

Former rugby league star Nathan Hindmarsh, and his wife Bonnie, welcomed their fourth child on January 1 and have named their son Dodge Billy. Dodge has three older brothers named Archie, Buster, and Rowdie. Nathan played for the Parramatta Eels from 1998 to 2012, making Rookie of the Year in his first season, and eventually becoming team captain and playing more games for the team than any other player at 330. He was also selected for the national team, the New South Wales state team, Country Origin, NRL All Stars, and the Prime Minister’s XIII. He set a world record for the most number of tackles in a game at 75 tackles, was the first player to make over 12 000 tackles in the NRL, and has won numerous awards.