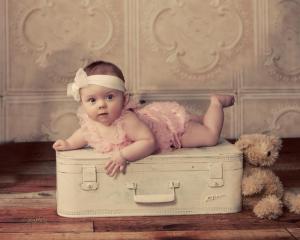 Mia first wrote in to the blog a couple of years ago, looking for a sibling name to match their son Bugsy. Mia and Lachlan’s second son arrived in May 2013, and after some discussion, they decided to name him Jem.

Now Mia and Lachlan are expecting a baby girl any minute (she was due yesterday),and still haven’t decided upon a name for her. I thought they would be all ready if they ever had a girl, because Mia had her heart set on the name Margot if Jem had been a girl, but since then one of Mia’s best friends has had a baby girl named Margot, upsetting Mia’s plans.

These are the names on her baby name list:

Besides Margot, other names that have been crossed off are:

Tessa (Lachlan thinks it’s a bit ho-hum)
Matilda (loves it, but it’s so popular ….)
Frankie (just not excited by it)

Middle name would most likely be Dorothy, Clementine, Jean, or Evangeline, depending on which one sounds best with the chosen first name.

Mia and Lachlan aren’t planning on having any more children, so Mia feels as if this name just has to be perfect.

Mia, I’m almost as devastated as you that Margot got crossed off your list! I feel like suggesting that you still go with Margot – except that it does seem a bit different because Margot is a currently uncommon but rising name. I expect your friend might feel a bit miffed about it, as opposed to you both having daughters named something popular like Ella or Charlotte.

Thinking about sisters for Bugsy and Jem, it seems to me that both your sons have got quite original names, and it would be nice if their sister had one equally distinctive.

Adeline
This is a beautiful name, and Adeline Dorothy sounds really lovely. However, I should probably warn you that Adeline is much more common than the data suggests due to spelling variants. What with Adelynne, Addalyn, Addelyne, Addilyn, Ada-Lynne and so on, it really isn’t a very rare name. If you use Addie as a nickname, it sounds like all the Maddies, and the name fits in so neatly with Addison, Adelaide, Madison, and Madeline that it almost seems too on trend. Could I interest you in Ada? It’s two syllables like Bugsy, three letters like Jem, and begins and ends in a different sound to both those names, so it seems like a good match without being “matchy”. However, I must confess Ada is very like Ava, so you might think this is too much on trend as well.

Lou
Very cute, and Bugsy, Jem and Lou is quite delightful. I think I do prefer it as a nickname for something like Louella (which is very hip), because it seems a bit insubstantial on its own. Louella Clementine is nice, although Louella Jean is charming. I only hesitate because you already have a name in your family with a strong L-l sound in it, which makes we wonder if you are comfortable with that.

Elka
Great name, which goes well with almost your middles (except Elka Evangeline, which sounds too much). The only thing which makes me hesitate is that when I see it matched with Bugsy, it really makes me notice the BUG and the ELK in their names a lot more.

Autumn
Very pretty and underused in Australia, although it does seem quite modern matched with Bugsy and Jem. I don’t think that’s a problem though. Autumn Dorothy is an attractive combination. This was a hugely popular name when it was covered on the blog, getting one of the highest approval ratings ever – not one person hated the name, while almost 40% loved it. It seems like a name that’s easy to wear.

Lottie
Adorable, with that vintage vibe Bugsy and Jem have. Lottie Jean is nice – both hip and homely. Again, it’s an L name, so think about that carefully.

Astoria
Like Bugsy and Jem, this seems like an American-inspired name that also has a vintage feel, since the Waldorf Astoria Hotel in New York flourished during the 1930s. There’s something about it which makes me inwardly gasp a little, just like Bugsy and Jem, so it does seem like a natural sister to them. It’s a bit daring! I love the nickname Story, which seems like a good match with Bugsy and Jem, and this goes well with most of your middle name options.

Lux
Bright, shiny, glittering, lovely. I like Lux Clementine and Lux Evangeline, which both sound very glamorous to me, and I think it’s a natural match with Bugsy and Jem. Another L name, so do think about it.

Mia, I remember when Jem was born you originally chose a different name for him, but after he was born, you realised that Jem was the name that belonged to him. I wouldn’t be surprised if the same thing happened with your daughter – it’s hard to decide on a name now, but once you get to meet your baby, the right name may become obvious.

POLL RESULTS
The most popular choice for Bugsy and Jem”s sister was Astoria, nicknamed Story, which had 26% of the vote. Lou was the third-most popular choice with 22%, but I think would have got higher with a full name behind it.

7 thoughts on “Urgent Name Help Needed: A Sister for Bugsy and Jem!”