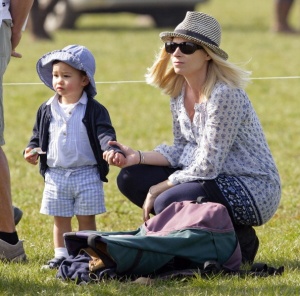 Christian
Christian Mowatt is the younger brother of Zenouska Mowatt, grandson of Princess Alexandra, and great-great-grandson of King George V; born in 1993, he is 51st in line to the throne. Christian is one of the most common names in the British royal family, especially in the middle. Prince Christian of Schleswig-Holstein, a member of the Danish royal family, was the husband of Princess Helena, the daughter of Queen Victoria. Their son was also called Prince Christian, and he was Queen Victoria’s favourite grandson, a British army officer who fell in the Boer War. Christian is from the Latin name Christianus, meaning “follower of Christ”. It has been used as a personal name since the Middle Ages, and was originally more common for girls amongst English-speakers. It became seen as a boy’s name after John Bunyan’s highly popular The Pilgrim’s Progress (1678), where the hero is a man named Christian. Christian has been a traditional name for Danish kings since the 15th century, and Prince Christian of Denmark, the son of Prince Frederik and Princess Mary, is second in line to the Danish throne. Christian was #178 in the 1900s, and disappeared from the charts the following decade. It returned in the 1950s at #280, perhaps inspired by French fashion designer Christian Dior, or Danish fairy tale writer Hans Christian Anderson, both popular at the time. It rose in the 1960s, and reached the Top 100 in 1971. Its progress has been up and down, and it’s currently #85. It’s a retro name that feels like a modern classic, popular for decades without feeling overused.

Columbus
Columbus Taylor is the eldest son of Lady Helen Taylor, a grandson of Prince Edward, Duke of Kent, and a great-great-grandson of King George V; born in 1994, he is 38th in line to the throne. The name Columbus is best known as the surname of Christopher Columbus, the 15th century Italian explorer and navigator under the patronage of the Spanish monarchy. In his efforts to find a safe passage to Asia by sailing west, he initiated the Spanish colonisation of the New World, leading to lasting European contact with the Americas that changed the world forever. The explorer’s Italian name was Cristoforo Colombo; Colombo is the Italian form of the saint’s name Columba, Latin for “dove”, and used by Christians in reference to the Holy Spirit, often symbolised as a dove. A name with Transatlantic appeal, nearly always given in honour of the explorer, and a more eyebrow-raising form of Callum.

Guelph
Guelph is one of the middle names of Leopold Windsor, the son of Nicholas Windsor, who has been featured on the blog as a royal dad. A grandson of Prince Edward, Duke of Kent, and great-great-grandson of King George V, Leopold was born in 2009, and as a Roman Catholic, is not in the line of succession to the throne. The House of Guelph was a European dynasty which played a major role in the politics of medieval Italy, but whose territories moved towards Germany early on, and was eventually succeeded by the Kingdom of Hanover – thus giving strong ties to the British royal family. The current head of the House of Guelph is Ernest August, Prince of Hanover, a descendant of King George II, and husband of Princess Caroline of Monaco. The House of Guelph was founded by Welf IV, Duke of Bavaria, of Italian and German heritage; his name is a Germanic one meaning “young dog”, and thus the equivalent of the English word whelp. A very noble name – perhaps even too aristocratic for most.

Hubert
Hubert was one of the middle names of George Lascelles, the 7th Earl of Harewood, who was the son of Princess Mary, and grandson of King George V, cousin to Elizabeth II. He passed his middle name down to his son, Mark Hubert Lascelles, born 1964, and not in line to the throne due to being born out of wedlock. Hubert is a Germanic name meaning “bright mind”, and became well known because of St Hubert, an 8th century Bishop of Liege. A French nobleman, he became addicted to hunting after his wife died in childbirth, until he had a vision of a crucifix between the antlers of the stag he was pursuing. Even though this legend was taken from the story of St Eustace, St Hubert is honoured as the patron of ethical hunting, having compassion for animals as God’s creatures. Widely venerated during the Middle Ages, St Hubert’s noble ancestry made him a favourite with chivalric and military orders. Hubert has been used in two Disney films – King Hubert is the father of Sleeping Beauty, while in Brave, Hubert is one of Princess Merida’s three brothers. Hubert was #102 in the 1900s, and had left the charts by the 1940s, so this vintage name may appear dated, although it is rising in the UK, and fits in with Hugh and Hugo.

Inigo
Inigo is one of the middle names of Charles Armstrong-Jones, the son of Viscount Linley, grandson of Princess Margaret, and great-grandson of King George VI; Queen Elizabeth II is his great aunt. Born in 1999, he is 19th in line to the throne, and his middle name is in honour of Inigo Jones, a personal hero of his father. Inigo Jones was a 17th century British architect and stage designer, a royal Surveyor-General, and hugely influential. Some of his many works include the Queen’s House in Greenwich, now used to house the art collection of the National Maritime Museum, the Banqueting House in the Palace of Whitehall, now a museum, and the Queen’s Chapel at St James’ Palace. He also designed Covent Garden square, and undertook repair and remodelling of St Paul’s Cathedral. Inigo is a British form of Íñigo, a Castilian form of the Basque name Eneko, translated as “my little love, my little dear one”. It may go back to Roman times, but from the Middle Ages was traditional amongst Spanish royalty and nobility. Pronounced IN-i-go, this was first used as an English name in Cornwall, but became traditional amongst descendants of Inigo Jones. Those descendants in Australia include meteorologist Inigo Owen Jones, and wealthy grazier Arthur Triggs, whose brother was named Inigo. A sweet yet solid choice, Inigo has been given further dash and a famous catchphrase by Inigo Montoya from The Princess Bride.

Maximilian
Maximilian Lascelles is the son of Henry Lascelles, the great-grandson of Princess Mary, and great-great-grandson of King George V; born in 1991, he is 66th in line to the throne. The name Maximilian is from the Roman name Maxmilianus, derived from Maximus, meaning “greatest”. There are a few saints named Maximilian, with the 3rd century martyr St Maximilian of Tebessa regarded as the first conscientious objector, because he believed that as a Christian, he could not serve in the Roman army. He has been a hero to the anti-war movement ever since. Maximilian I was a 15th century Holy Roman Emperor, named for one of the St Maximilians – probably Germanic missionary and martyr Maximilian of Celeia – and the name has been traditional amongst European monarchy ever since (the tradition that his name was a cross between two Roman emperors is just folklore). Maximilian is around the 400s here, but significantly higher in the UK. Handsome and regal, Maximilian sounds very imposing – but shortens to popular, friendly Max.

Otis
Otis Shard is the son of Lady Emily Shard, and the great-great-grandson of King George V; born in 2011, he is not in the line of succession because his mother was born out of wedlock. Otis is a surname derived from an English form of the medieval Germanic name Ode or Odo, an earlier form of the German name Otto. The surname is very well known in the United States, as the Otises are a prominent family influential in early American politics; aviation pioneer Amelia Earhart was one of their members. Famous musical namesakes include Otis Redding, Otis Rush, Otis Span, rapper Otis Jackson Jr, and Otis Williams, from The Temptations, and another musical connection is the song Otis by Kanye West and Jay-Z, sampling Otis Redding. A rising name in the UK, Otis is around the 300s here, and a very fashionable choice.

Tane
Tane Lewis is the brother of Senna Lewis, and great-great-grandson of King George V; born in 2012, he is 30th in line to the throne. As earlier discussed, Tane’s father is New Zealander Gary Lewis, the only Maori to have married into the British royal family, and Tane has a name to honour his heritage. Tane is the god of trees and birds in Maori mythology, the son of the sky father and the earth mother, who clothed his father in the stars and his mother with vegetation. In some legends, he made the first man, and in others he made the first woman, moulding her from soil so she could be his wife. The word tāne means “man” in Maori, and it is pronounced TAH-neh, although I have met boys in New Zealand and Australia called Tane who say their name TAYN. A strong, simple yet evocative name which is a wonderful heritage choice, fitting in with familiar names such as Tanner, Tate, and Talon.

Tewa
Tewa Lascelles is the brother of Tanit Lascelles, a great-grandson of Princess Mary, and great-great-grandson of King George V; born in 1985, he is 58th in line to the throne. Tewa’s mother was Lori Lee, known as “Shadow”, of Native American descent, and his name was chosen to honour his heritage. The Tewa people are from New Mexico, and the name Tewa comes from a Keres word meaning “moccasins”; it is pronounced TAY-wuh, rather like Taylor with a W instead of an L. Tewa Lascelles, an American citizen, was born in New Mexico, and perhaps the name reflects his birthplace as well. Tewa is in a progressive punk band, following in his family’s musical footsteps, as James Lascelles is a keyboardist with an interest in world music, and grandfather George Lascelles devoted most of his career to opera.

Xan
Xan Windsor, Lord Culloden, is the brother of Lady Cosima Windsor, son of the Earl of Ulster, and great-great-grandson of King George V; born in 2007, he is 26th in line to the throne. Xan is named in honour of his father, Major Alex Ulster, and this snappy short form of Alexander seems very versatile. Fresh and futuristic, Xan could belong to either gender, and is of ambiguous cultural background, making it the perfect choice for the modern age.

POLL RESULTS
People’s favourite names were Otis, Christian and Tane, and their least favourite were Columbus, Tewa and Guelph.

4 thoughts on “Boys Names from the British Royal Family”