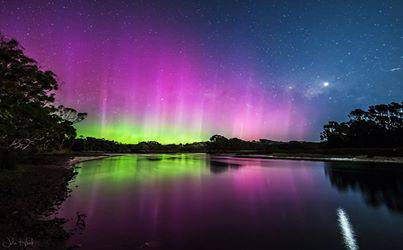 Name in the News
On March 17, a rare aurora australis was seen over New Zealand and Australia, swirling across the late night skies in patterns of red, green, blue, and purple. Aurora australis is also known as the Southern Lights, the southern hemisphere equivalent of the aurora borealis, or Northern Lights.

An aurora event occurs when rapidly moving particles that originated from the sun come in and strike the upper atmosphere, more than 100 kilometres above the earth. The energy from the particles striking molecules in the atmosphere are released as light, and the colours that you see depend on which molecules are struck – green and red come from oxygen, while blue and purple are from nitrogen.

Aurora events sometimes happen when large solar flares and explosions of material come off the sun, which is what occurred this week, setting off a geomagnetic storm. An aurora australis is usually best viewed from Antarctica, but moderate ones can be seen from Tasmania. However, this week’s aurora was so bright that it was visible as far north as Canberra, and Goulburn and Kiama in New South Wales, while even in Brisbane there was a red tinge to the sky.

In Aboriginal mythology, the aurora australis was often seen as fire in the sky, and conjectured to be bushfires in the spirit world, campfires glowing in the land of the dead, or fires lit by evil spirits. It seems to have been generally seen as an ill omen, or a sign of a god’s displeasure. In south-west Queensland, where aurorae are uncommon and less spectacular, it was thought that the spirits were able to transmit messages through an aurora, allowing communication with the ancestors.

Rare, awe-inspiring, and staggeringly beautiful, an aurora is a celestial phenomenon not to be missed. Little wonder that in the past it was seen as something mysterious and otherworldly.

Name Information
Aurora was the Roman goddess of the dawn, and her name literally means “dawn, sunrise, daybreak”. She is the equivalent of the Greek goddess Eos, and the Hindu goddess Ushas. The name comes from an ancient root meaning “shining one”, and is related to the English word east, as well as the Latin aurum, meaning “gold”. It has connotations of springtime, and the new year – all symbols of rebirth and new beginnings.

In Roman mythology, Aurora renews herself each morning and flies across the sky to announce the arrival of the sun, her brother. She often appears in poetry (Virgil describes her as having a “saffron bed”), and her beauty and desirability are such an important part of her image that it is thought she must originally have been a goddess of love, with the different aspects of dawn and eroticism becoming separated into Aurora and Venus.

One of her key myths involves her love affair with a Trojan prince named Tithonus. Wanting to be with Tithonus for all eternity, she asked Jupiter to make him immortal. He granted her request, but because Aurora did not ask for him to remain eternally youthful, he was doomed to be old forever. Aurora saved him from this fate by turning him into a grasshopper.

Although you may read of the goddess Aurora in Tennyson and Shakespeare, see paintings of her, and even hear of her from Bjork, the name is probably best known from the 1959 Disney film Sleeping Beauty, where the comatose princess is called Aurora. In the movie, the king and queen choose the name because their daughter has “filled their lives with sunshine”.

In Charles Perrault’s version of the fairy tale, the Sleeping Beauty was not given a name, but she bears the Prince two children named L’Aurore (“the dawn”) and Le Jour (“the day”). Tchaikovsky’s ballet gives the daughter’s name to the mother, so the Sleeping Beauty is called Princess Aurora, and Disney followed this, as well as the TV series Once Upon a Time. (In the German version of the tale, she is called Briar Rose, which Disney used as Aurora’s code name, and in the earliest Italian one, Talia, who had children named Sun and Moon).

Aurora has been used as a name since the 17th century, and from the beginning was an international choice, showing up in records in England, Italy, and Scandinavia, and by the following century was used in countries all over the world, but especially in Europe.

Currently, Aurora is popular in Norway and most popular in Italy, where it is #3. In the United States, Aurora has been almost constantly on the Top 1000, and is now #145. It has been rising steadily since 1995 – the same year that Disney’s Sleeping Beauty was re-released in cinemas. In England/Wales, Aurora has been on the charts since 2011, and is rising steeply at #257. Amongst English-speaking countries, Aurora is most popular in New Zealand, where it has been Top 100 since 2013 and was #77 last year.

In Australia, Aurora is around the mid-100s, so has a similar popularity to that in the US. As it is rising in other countries, it is most likely rising here too. Around the world, Aurora is often given as a name in scientific contexts, and in Australia it is well known as an energy company. Aurora Point on Macquarie Island is named after the SY Aurora used on Douglas Mawson’s Antarctic expedition, with the yacht itself named after the aurora australis.

Aurora is an internationally recognised name with a poetic meaning and many attractive associations – an alluring dawn goddess, a sunshiney fairy tale princess, an iridiscent light in the heavens. It’s elegant and enchanting, rich and frothy, a name that seems to shimmer with colour, shot through with the rosy pink and gold of daybreak. One drawback is that it not particularly easy to say, which is why Auroras nearly always seem to have a nickname, such as Aura, Auri, Rora, Rory, Ro, or Roo, adding a cute or tomboyish option to a flouncingly feminine name.

POLL RESULTS
Aurora received a decent approval rating of 66%. 21% of people saw the name Aurora as pretty or beautiful, but 16% found it too difficult to pronounce.

(Picture is of Aurora australis seen over the Forth River in Tasmania; photo taken by Julie Head and published in The Advocate).