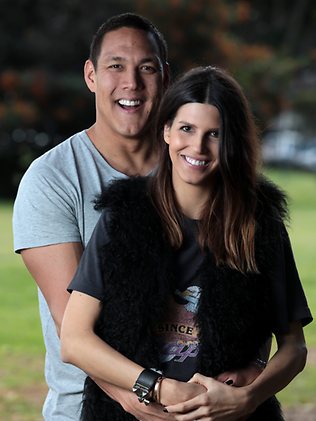 Geoff Huegill established himself as one of the world’s great butterfly competitors, winning bronze and silver at the 2000 Summer Olympics, and winning seven gold medals at various Commonwealth Games. He has won 28 international medals, been world champion five times and set eight world records. In 2005, Geoff announced his retirement from swimming, after battling with his weight and failing to qualify for the Australian team. Retirement sent him into a deep depression, which he tried to deal with through drugs, alcohol and junk food. In 2008, he announced his comeback, having shed 40 kg (88 pounds) in readiness. By 2010, he had already won a national medal and won the Australian title. He went on to win an international medal, and then took two gold medals at the Delhi Commonwealth Games. He plans to compete at the London Olympics this year.

Sara Huegill, nee Hills, was in PR at a major fashion firm prior to her marriage, and has her own fashion blog. She and Geoff were married in Bali in April last year. Geoff credits his comeback to Sara’s support.

Mila is a pet form of Slavic names with mil in them, meaning “gracious, dear”. It’s fast becoming a fashionable favourite that sounds similar to popular Milla.

(Full story and photos in this week’s New Idea magazine).