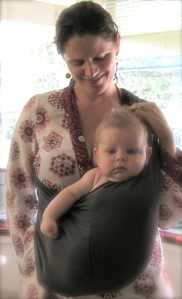 Prevention magazine recently had a story about people who had successfully made their lives less stressful, and more fulfilling. One of them was Julija McDowell, who is originally from Canada, and married to an Australian man named Nicholas.

Julija and Nicholas used to live in San Francisco, where they both worked as animators for George Lucas’ company, Industrial Light and Magic. Highly-paid and highly-stressed, they worked 60-100 hours a week.

When Julija became pregnant with their first child in 2004, she decided to leave her job to concentrate entirely on motherhood. Enjoying the less stressful world of parenting, she kept an online diary of what her children did every day, and from this started an online company to give parents ideas for play and interaction with their children.

A year ago, the McDowell family moved to Sydney, and found relocating to Australia a wonderful opportunity to make their lives less stressful. Now both of them are self-employed and work from home, and because the family is always together, has formed a much closer bond.

They have got rid of their television set to give themselves more quality time, and Julija finds simple family pleasures such as eating dinner each evening, or walking her son to school through Sydney Harbour National Park every morning, very relaxing.

These are the names of the McDowell children:

Dragan is aged six. The name Dragon is one in their extended family, and the similar-sounding Dragan is a Slavic name that means “precious”. (For some reason, Julija thinks it also means “traveller”; something which I haven’t been able to figure out). Dragan seems like a way to honour extended family, Julija’s Slavic background, and also choose a name with a very lovely meaning.

Avanyu is aged four. They chose her name before she was even conceived! The McDowells wanted another “monster” name for their next child to match their “dragon” son. They decided on a monster from Native American culture. Avanyu is a Tewa deity, a feathered sea-serpent who is the guardian of water amongst the tribes of the American South-West.

Taikaro is aged 2. They looked for another “monster” name so that they could continue their name theme, but found it harder than they imagined, as none seemed to suit their son. In the end, Nicholas’ mother showed them a list of old family names from the McDowells, and they chose Taikaro from the list. Nicholas’ great-great-great grandfather married a Maori princess from the Taikaro tribe; the name apparently means “the lost coast”, and if so, the tribal name would have been locational. I checked the Maori dictionary, and according to that, the phrase can mean something like “the elusive coast”, perhaps suggesting it was a good place to hide or hard to find, or even “the scooped-out coastline”, which would refer to its appearance.

The McDowells have chosen unusual and creative names for their children from a variety of cultures, and from their family histories. It also shows one of the perils of choosing a “theme” for your family – you might successfully come up with two names that go together perfectly, but that third name that fits the theme, suits the child, and is also loved by the parents can prove elusive!