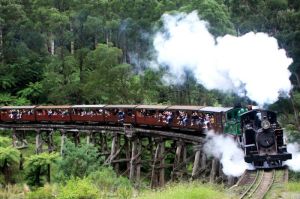 Cardinia is an outer suburb of Melbourne, in the shire of the same name. The name Cardinia is taken from the local Bunurong phrase Kar Din Yarr, meaning “to look towards the rising sun”. I’ve always thought this would make a great girl’s name, with an interesting sound and an inspiring meaning. To me it sounds like a cross between Caroline and Gardenia, and is a native alternative to Dawn and Aurora.

Clematis is another outer suburb in the Shire of Cardinia, leading into the Dandenong Ranges. It’s a tiny village dating to the turn of the century, with a few basic amenities. Its fire brigade formed in 1936, takes about 100 emergency calls per year, and has fought many major blazes in Victoria and New South Wales. The suburb is named after the climbing plant, which looks wonderful in the garden and has large, beautiful flowers. The plant’s name is Ancient Greek, and probably referred originally to the periwinkle (the plant we call clematis is from Asia, and related to the buttercup). Clematis is an elegant name filled with Edwardian charm; it’s more unexpected and alluring than Clementine.

The name Doreen looks like an elaboration of the name Dora, perhaps influenced by Kathleen, and is said to have been invented by English author Edna Lyall, who published a novel called Doreen in 1894. The Doreen in her story was an Irish singer, and possibly Lyall had heard of the Irish name Dáiríne, which is pronounced daw-REEN-uh, and means “fertile”. Although this outer suburb of Melbourne had been settled since 1844, it was renamed Doreen in 1895, just a year after Lyall’s novel. Perhaps someone was a big fan of the book? Doreen plays a role in Australian literature too, for poet C.J. Dennis wrote a famous verse-novel called Songs of a Sentimental Bloke (1915), in which larrikin Bill meets, courts and marries his sweetheart. This is a girl who works in a pickle factory called Doreen, and she turns Bill from a Melbourne gang-member into a contented husband and father. It’s been made into two movies, a musical, a TV show and a ballet. Doreen was #83 in the 1900s, and peaked in the 1920s at #21, no doubt influenced by the rhymes of C.J. Dennis. It hasn’t charted since the 1970s.

Emerald is a town and semi-rural area in the Shire of Cardinia, and its post office first opened in 1899. It’s a popular tourist destination, because it has the Puffing Billy steam train railway which opened in 1900, and enjoyed its heyday in the 1920s. The town also holds a number of festivals through the year. Emeralds have been mined on a small scale in New South Wales and Western Australia; there is a town in Queensland named Emerald; and David Williamson’s play Emerald City is a classic of modern theatre – the title a reference to The Wizard of Oz. Emerald is a name that I’ve seen in occasional use, and the popularity of Ruby is almost certainly making other gemstone names for girls seem more usable. It also has a connection to Ireland, because this country is known as The Emerald Isle. The name is ultimately from the Greek, meaning “green gem”. Perhaps the town got its name because it is set in the forest like a green jewel – although Gembrook is just up the road.

Iona is a rural area in the Shire of Cardinia; its post office opened in 1898, and it received its current name in 1905. It is named after an island in the Hebrides, off the coast of Scotland. According to tradition, Saint Columba founded a monastery there in the 6th century, and it played a vital role in converting the Picts of Scotland and the Anglo-Saxons of northern England to Celtic Christianity. A renowned centre of learning for four hundred years, Viking raiders plundered it, and the monastery was abandoned. Today it has an ecumenical Christian community, active since the 1930s; they worship in the restored medieval Iona Abbey. The island’s name is thought to come from the Gaelic for “place of yew trees”, but may also be from the Old Norse for “island of the bear cave, island of the animal den”. It is still a popular name in Scotland, and seems like a good alternative to the popular Isla with the fashionable OH sound in it (it’s said ie-OH-na).

The suburb of Jacana was originally farmland owned by Duncan Kennedy in the 1840s, and its streets were laid out in 1923 after the land was sold. During the 1950s to 1970s, the land was developed by the government Housing Commission, who built most of the houses. They also re-named some of the early streets, which had been given jocular names such as Emu Parade and Sunset Boulevard. Being developed as a Housing Commission suburb, it is a lower-middle and working-class area with good amenities. The suburb is apparently named after Jacana Avenue, which is in the next suburb of Broadmeadows; other streets nearby also have bird names, such as Ortolan and Dacelo. Jacanas are tropical birds that live on lily lakes in wetlands and found world-wide; in Australia we have the Comb-Crested Jacana. Its name is Brazilian-Portuguese, and pronunciation is very diverse around the globe. The Australian way to pronounce it is juh-KAH-nuh, although the original is more like ZHAH-suh-NUH. I think this is a pretty and unusual bird name that sounds similar to Jacqueline, Jana and Jacinta, but with its own “feel”.

Kallista is in the outer suburbs, and the first European inhabitants were loggers in the 1850s; gradually farmers began settling in the area as the forest was cleared. From early on, the government preserved a section of it as state forest, and once the roads were completed, Melburnians began using it for weekenders and holiday homes. During the Depression, many people could not afford the luxury of a second home for holidays, and they were bought up cheaply by those hoping to support themselves by living off the land. The suburb gained its name in 1925, from the Ancient Greek Kalliste, meaning “most beautiful”. In Greek mythology, Callisto or Kallisto was one of the nymphs of Artemis, although Kalliste was one of the epithets of the goddess herself, and the stories of the nymph were probably originally about Artemis. Callisto was seduced by Zeus, and gave birth to a son named Arcas, who became the king of Arcadia. Jealous Hera turned Callisto into a bear, and when a teenaged Arcas was hunting in the woods, he almost shot his own bear-mother. Zeus placed them in the sky as the constellations Ursa Major and Ursa Minor to protect them. A very pretty “star” name.

The outer suburb of Olinda began as a logging settlement, but began growing in the early 1900s as land became available for market gardening. It is famous as the home of artist Sir Arthur Streeton, and today is an artsy-craftsy sort of suburb, studded with antique shops and galleries. Olinda is named after Olinda Creek, which has its source in the suburb, and the creek was named after Alice Olinda Hodgkinson, the daughter of Victoria’s acting surveyor-general in 1859. Her unusual middle name is something of a mystery to me – I have seen it defined as a German name meaning “defender of the land”, which became used in Spain thanks to the Visigoths. However in English, this name is said to be derived from the place Olynthus in Greece, meaning “fruit of the wild fig tree”. Olinda’s Adventures was the first novel of a precocious teenage writer in the 17th century called Catherine Trotter. It fits in with other literary names of that period, such as Orinda and Belinda. It sounds like retro Linda, dressed up with the fashionable OH sound, and still seems exotic and poetic.

Sassafras is in the outer suburbs, and lies between Olinda and Kallista. It was opened to farming in the 1890s, and a small township developed. Around the turn of the 20th century, it began to attract tourists, and still caters for them, with boutique stores, cafes serving Devonshire teas, and garden nurseries. Sassafras has very fertile volcanic soil, which makes it ideal for growing plants. Aptly enough, it is named after the sassafras tree, found growing there in profusion. These are not true sassafras, which are native to North America and Asia, but Southern Sassafras, an ancient tree from the southern hemisphere, with several species native to Australia. The one in Victoria is Atherosperma moschatum, and it grows in cool temperate rainforest. An evergreen, it flowers in winter with white petals, and its springy timber is in demand for speciality woodwork. The word sassafras is thought to be a corruption of saxifrage, an unrelated genus of tough alpine plants; their name is from the Latin for “stone breaker”. I have seen this once in a birth notice for a baby girl; it’s an unusual plant name which gives the nicknames Sass and Sassy.

This inner-city suburb has been a township since the late 19th century, and is an important part of our industrial history, because the Sunshine Harvester Works were moved here in 1906 by H.V. McKay, and became the largest manufacturing plant in Australia. It was after this that the suburb was given its present name; it is believed that McKay chose Sunshine for the name of his business after hearing a sermon by visiting American evangelist Rev. Thomas de Witt Talmage. The word sunshine seems to have been frequently used in Talmage’s writings, as a symbol of happiness and God’s blessings. McKay planned Sunshine on Garden City principles, and workers flocked there to live. The manufacturing plant was demolished in the early 1990s, but there is still plenty of industry, and it has attracted many migrants, especially from Malta and Vietnam. Skier Lydia Lassila grew up here, as did singer Bon Scott; Prince Philip lived here briefly. This cheerful, friendly name isn’t just from nature – it’s one connected to our manufacturing history, and also has idealistic Christian roots. Although unisex, the film Little Miss Sunshine helps give it a feminine edge. Sunny makes a cute nickname.

This suburb is named after Truganini, considered to be the last “full blood” Palawa (Tasmanian Aborigine). Truganini was a chieftain’s daughter born in 1812 on Bruny Island, described as a vivacious and intelligent woman by contemporary sources. Her mother was killed by whalers, her two sisters were abducted and taken as slaves, her fiance died saving her from being abducted herself. Efforts at conciliation meant that Truganini and the last surviving Palawa people were moved around, including a short time in Melbourne, which is how the suburb received its name. By 1873, Truganini was the last Palawa left, and she died three years later. Her final request, that her ashes be scattered in the D’Entrecasteaux Channel near her island home, was ignored; she was buried in a convict workhouse in Hobart. Two years later, her skeleton was exhumed, and put on display by the Royal Society of Tasmania. In 1976, a century after her death, her last wish was finally fulfilled. Her name is the Palawa word for the tough plant we call grey saltbush (Atriplex cinerea), and can be spelled a number of ways. This could make an interesting heritage choice, although its namesake is a tragic symbol of Indigenous genocide. The correct pronunciation is not known, but Truganina could be said to give the nicknames True and Nina.