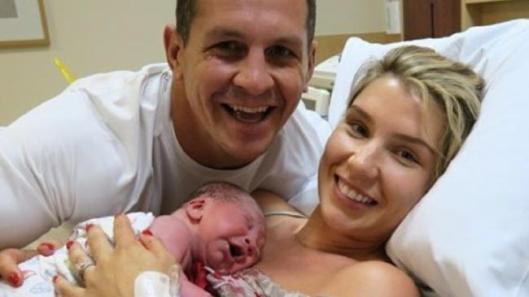 Former NRL star Mal Meninga and his wife Amanda welcomed their daughter Eva last October, a sister for Zach, aged 2, and Elijah, aged 3; both Zach and Elijah had their births featured on the blog. Mal has two adult children named Tamika and Josh from his first marriage.

Greg Bird and his wife Becky welcomed their daughter Finley Elise on April 6 [pictured]. Greg has played rugby league in both Australia and France, and has been signed with the Gold Coast Titans since 2010. He has been selected for the Australian national team, the New South Wales state team, Country Origin, the Indigenous All-Stars, and the Prime Minister’s XIII.

Dane Gagai and his partner Kelly Turner welcomed their son Dante in May. Dane first played for the Brisbane Broncos, but has been with the Newcastle Knights since 2012. He has been selected for the Queensland state team, and for the Prime Minister’s XIII. Of Torres Strait Islander heritage, Dane has been chosen for the Indigenous All-Stars, but is eligible to play for New Zealand as well.

Josh Hodgson and his wife Kirby welcomed their son George on June 2. Josh is an English player who was with Hull FC and Hull KR for several years before signing with the Canberra Raiders last season. Josh has played both for the England Knights, and for England’s national squad. (Information from post-match interview).