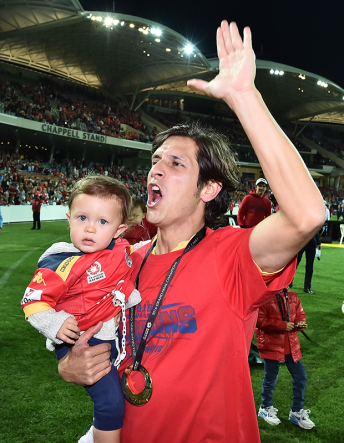 At the start of the month, Adelaide United won the Grand Final in the A-League, which prompted an article on those team members who had recently welcomed babies.

Eugene Galekovic, and his partner Nancy Timpano, welcomed a son named Jayden earlier this month, their first child. Eugene has played football in both Australia and Portugal, signing with Adelaide in 2007, after spending most of his career in his home city of Melbourne. Eugene also plays for the Australian national team.

Isaías Sánchez, always known by his first name only, and his wife welcomed a daughter named Vega last spring. Isaías is a Spanish footballer who played for Barcelona’s second division before signing with Adelaide in 2013. Vega is a Spanish name meaning “meadow”.

Pablo Sánchez and his wife welcomed a son named Pablo a year ago [pictured]. Pablo Snr is another Spanish footballer from the second division, and he signed with Adelaide in 2014. He was released from Adelaide United shortly after their Grand Final win, his contract having expired.