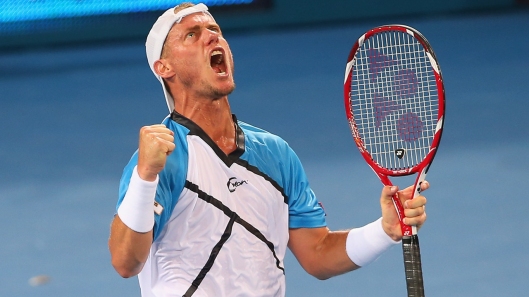 January is the great month for tennis in Australia. There’s the Australian Open and Kooyong Classic in Melbourne, the Hopman Cup in Perth, the Brisbane International, and the Sydney International, as well one-off events and exhibition matches around the country. I have to watch all of them, because my husband is a tennis fan who started playing as soon as he could hold a racket without falling over from the weight of it.

This year one Australian champion bowed out of competition, while a young player began competing under the Australian flag for the first time.

Lleyton Hewitt retired after making his twentieth appearance at the Australian Open, a former world number 1 and youngest ever male to make number 1, at the age of 20. Not only remembered as someone who was once at the top of the game for several years, he never lost his fighting spirit, and catchphrase warcry of “C’mon!”. He has been an inspiration for many young tennis players, and made the Australia Day honours list year.

Daria Gavrilova is a Russian-born tennis player who was the world number 1 junior, winning gold at the 2010 Youth Olympics. She emigrated to Australia last year, as her boyfriend is Australian player Luke Saville, and became an Australian citizen. Last month she won the mixed doubles at the Hopman Cup with partner Nick Kyrgios, and is the number 2 Australian player in women’s tennis.

LLEYTON
Lleyton is a variant spelling of Leyton. This English surname is derived from several places in the UK called Leyton, Layton, or Leighton. Depending on regional accent they can either be said LAY-ton, LIGH-ton, LEE-ton, or even LAW-ton, but the first is by far the most common.

Leyton in north London means “farm on the River Lea”; the River Lea’s name may come from the Celtic meaning “light, bright”, and possibly refers to the god Lugus. Layton in Lancashire comes from the Old English meaning “farm near water channels” – Layton is part of Blackpool, which had a drainage system of channels running over its peat bog. However, most places with these names are derived from the Old English for “leek farm”.

As a first name Layton and Leighton are the earliest spellings, in use since at least the 16th century. Most people with the names have been male, although from the beginning they were sometimes given to girls too. The names had early associations with Shropshire and Warwickshire, suggesting the inspiration may often have been the village of Leighton in Shropshire.

Leyton has been used as a first name since the 18th century, nearly always given to boys. Also strongly associated with Shropshire and Warwickshire, Leyton shows up in the Leyton area near London. For reasons I have been unable to identify, the name Leyton is also associated with south Wales, and there are several well-known Welshmen with the name Leyton or Leighton.

Lleyton seems to be a modern innovation, and to be found quite rarely. It is interesting to speculate whether the double L is an attempt to make the name seem more Welsh, in the style of names like Lloyd and Llewellyn. The name has become more common in the 21st century, perhaps due to Lleyton Hewitt himself.

Lleyton has shown up in the UK data since 2000, the start of Lleyton Hewitt’s career and his first Grand Slam win. The name peaked in 2005 at #747, and in 2014 there were 15 baby boys given the name Lleyton. In the US, 34 boys were named Lleyton and no girls, so if nothing else, this spelling seems to be only one which is currently male-only.

I see this name quite often in Australian birth announcements, with such a variety of spellings that no single variant would ever show up in data. It is sometimes used for girls here, but in these cases is invariably spelled Leighton, perhaps because of Leighton Meester.

This is a contemporary unisex name with a perhaps confusing array of spellings – but only Lleyton will always seem male, and remind people of the famous tennis player.

DARIA
Daria is the feminine form of Darius, a Romanised form of the Greek form of the Persian name Dārayavahush, meaning something like “possessing goodness, holding onto goodness”. In modern Persian, the name Darya coincides with the word for “sea”.

St Daria is a legendary saint. According to legend, she was a Roman Vestal Virgin married off to an early Christian nobleman named Chrysanthus. He converted her to Christianity, and persuaded her to live with him in a state of chastity (which helpfully agreed with her vows as a Vestal Virgin). The pair of them went around converting loads of other Romans, and eventually they were tortured and executed.

The story (written centuries after the supposed events) goes against everything we know about the status of Vestal Virgins in ancient Rome – they weren’t allowed to marry before the completion of their vows, and at one point, Daria’s punishments include being placed in a brothel as a common prostitute, an act of sacrilege which simply could not have occurred.

However, the story must have been appealing as they became quite popular saints. Three cities claim to have the remains of Chrysanthus and Daria, and the ones in Italy have been been confirmed as a male and female in their late teens, dating to roughly the correct era, so they at least got some believable bones.

St Daria was especially venerated in the Orthodox faith, and the name Daria is much more common in Central and Eastern Europe than elsewhere, although also used in Spain and Latin America. It is popular in Poland and Romania.

Daria has been used in the English-speaking world since the 18th century, without ever becoming very common. It’s been on the US Top 1000 a smattering of times, and in 2014 there were 104 baby girls named Daria – the same number as those called Arwen and Memphis. In the UK the name Daria is #439 and rising: a reflection of high immigration from Poland and Russia.

The name Daria isn’t common in Australia. It may be familiar to some because of Daria Gavrilova and Australian gymnast Daria Joura – although perhaps best known from the sardonic teenage cartoon character Daria Morgendorffer.

Daria has several possible nicknames – Dasha, Dasia, Danya, Darinka, and Dolly are a few in use. Both Daria Gavrilova and Daria Joura are known as Dasha (said like DAH-shah, not like Dasher the reindeer), and this makes Dash another possible nickname.

Darius is becoming better used, and the fame of the Australian tennis player could give more publicity to its feminine form. Strong and attractive, Daria would work well multiculturally.