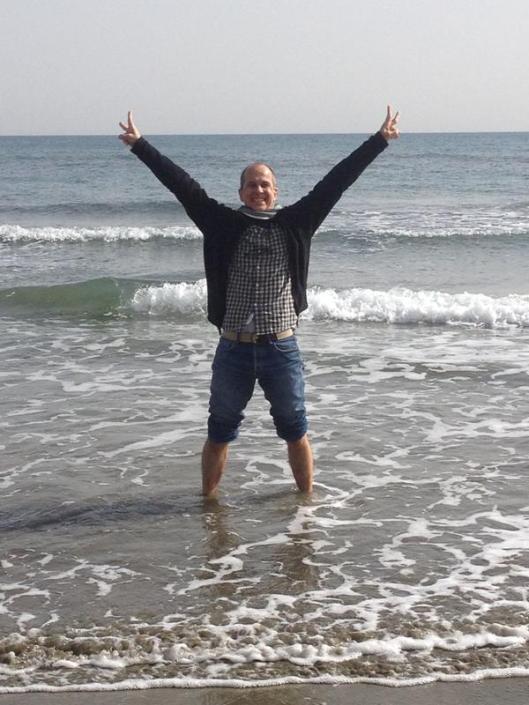 On February 1, award-winning Latvian-Australian journalist Peter Greste was freed from the Egyptian prison where he had been confined for 400 days. While on temporary assignment for news service Al Jazeera in Egypt, Peter was arrested with two of his colleagues in December 2013, charged with aiding the outlawed Muslim Brotherhood. After a farcical show-trial in which no evidence was presented, the three of them were sentenced to seven to ten years imprisonment as terrorists.

Regarded as political prisoners by the international community, there has been a concerted global campaign by journalists to free the Al Jazeera staff, using the slogan: Journalism is not a crime. Along with diplomatic negotiations, this resulted in a retrial being announced, followed by Peter being deported to Australia.

Peter kept himself sane in prison through exercise and meditation, and undertaking a degree in International Relations. He thought of the things he wanted most – to watch the sunset, to see the stars in the sky, and to feel sand between his toes.

Once released, he tweeted a photo of himself at the beach in Cyprus, saying how sweet freedom was. Peter is elated to be back with his family, but is concerned about his colleagues Mohamed Fahmy and Baher Mohammad, who are still in prison. Let the campaign to free Al Jazeera staff continue until they all can be at liberty.

The word liberty means “freedom”, ultimately from the Latin libertas. Libertas was the Roman goddess of liberty.

Our modern ideal of political liberty comes from the ancient Greeks, and is closely bound up with democracy. A free society, where all citizens live in liberty, is generally seen as one where slavery does not exist, and where everyone has equal political rights.

Liberty, in conjunction with equality and fraternity, was the catch-cry of the French Revolution, now the motto of modern France. For a time, Lady Liberty replaced the Virgin Mary on altars, and the French Republic symbol of Marianne portrays the goddess of Liberty, an allegory of democracy, reason, and freedom.

Liberty has also been a guiding principle for the United States, with the the Declaration of Independence promising “Life, Liberty, and the Pursuit of Happiness”, while Abraham’s Lincoln’s Gettysburg Address speaks of a nation “conceived in liberty”.

The Pledge of Allegiance offers fealty to a nation who stands for “liberty and justice for all” (taken directly from the French motto), and the patriotic song My Country, ‘Tis of Thee praises the “sweet land of liberty” – referenced in Martin Luther King’s I Have a Dream speech.

As a sign of their shared love for the ideal of liberty, the people of France gifted the people of the United States with a giant statue of Liberty Enlightening the World, known as the Statue of Liberty. Standing on Liberty Island in New York City’s harbour, it is one of America’s best known icons, symbolically welcoming immigrants to a land of freedom.

Liberty is also a Christian virtue, symbolising being set free from the slavery of sin. There are several mentions of liberty in the Bible, including the quote from Leviticus which is written on the Liberty Bell in Philadelphia: Proclaim liberty throughout all the land unto all the inhabitants thereof.

Liberty has been used as a personal name since the 18th century – the time of the French Revolution and the American War of Independence. In the beginning, it was far more common in America, strongly resonating with the American desire for freedom. The name Liberty was given from the time of the first protests against British taxation, under the Liberty Tree in Boston.

In the United Kingdom, the name Liberty was particularly associated with Kent during the 18th century. Kent has long been an area of military importance, and Chatham Dockyard on the River Medway built naval ships for centuries. During the 18th century, the UK was at war with France and Spain, and Kent was a major centre for the defence of Britain. Interestingly, many of the Libertys were born around the Chatham area.

Liberty is often thought of as a “hippie” name, symbolic of the flower child yearning for personal freedom. However, it must have many times been given patriotically, with political freedom in mind.

Historically, Liberty has been given to boys more commonly than to girls, perhaps because it has often been connected with military events and political power. The goddess Liberty (“Lady Liberty”) certainly helps give it a feminine air, and these days it is thought of as a primarily female name, although the film The Man Who Shot Liberty Valance (with Lee Marvin in the title role) is a reminder of its unisex status.

The name Liberty turns up on the US Top 1000 at three historically apt moments. First in 1918, at the end of World War I, then in 1976, in the American bicentenary, and it has been on the charts since 2001, the year of the September 11 terrorist attacks in New York and Washington. Currently it is #532 and fairly stable.

Liberty is most popular in the UK, where it is associated with the prestigious Liberty department store in London’s West End, which has been selling luxury goods since the 19th century. (The store’s name has nothing to do with freedom, but is named after its founder, Arthur Liberty, whose surname means “lead worker”). Liberty silks and prints have helped give it a fashionable air.

Having been in the Top 500 since before 1996, Liberty peaked in 2003 at #157, when conservative MP George Osborne chose it for his daughter, perhaps giving it an aristocratic stamp. The name had a small boost of popularity after the 2005 London Bombings, and is currently #373.

Liberty has never charted in Australia, and is a rare find in historical records here, more often used in the middle. It does seem to have been fairly evenly chosen for both boys and girls in the late 19th century. A famous Australian with the name is Liberty Wilson, the sister of comedian Rebel Wilson, while one with Liberty as his middle name is Walter Liberty Vernon, the architect who designed the Art Gallery of New South Wales.

Liberty is an interesting virtue name that is very rare in Australia compared to its use in the UK and US. I can see it appealing to a wide variety of people from all walks of life, and a broad spectrum of political views. Libby or Libbie is the obvious nickname, but for a boy named Liberty, or for a girl who wants a boyish nickname, there is always Berty. In Australia, Liberty Eggs may be a slight issue, although free range chickens seem a positive thing to me, while the Subaru Liberty makes this a car name.

POLL RESULTS
Liberty received a decent approval rating of 68%. People saw the name Liberty as interesting and different (24%), having a wonderful meaning (22%), and pretty or beautiful (16%). However, 14% thought it was too hippy-dippy. 2% of people were reminded too strongly of the Liberty Subaru or Liberty eggs.