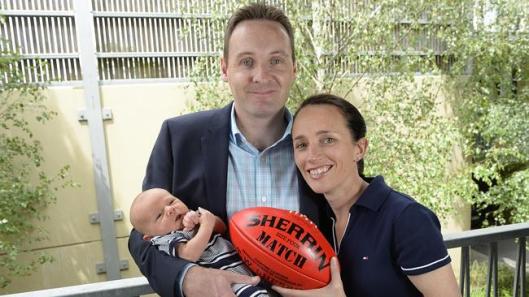 Olympic marathon runner Lisa Weightman, and her husband Lachlan MacArthur, welcomed their first child early this month and have named their son Peter Richard. Peter is named after both his grandfathers, and his middle name is a tribute to Lisa’s coach and mentor, Richard Telford. Lisa has represented Australia in the 2008 and 2012 Olympics, and won bronze at the 2010 Commonwealth Games. She won her first marathon race in 2010 in Japan, and is hoping to compete at the 2016 Olympics. Lachlan is also a runner, and was Lisa’s training partner. Lisa’s father played football for Fitzroy, and her cousin Dale Weightman was an AFL star with Richmond, so everyone is expecting Peter to be a sportsman of some kind too.

NRL footballer Mitch Cornish, and his partner Abbey, welcomed their son Noah on December 9. Mitch plays for the Canberra Raiders.