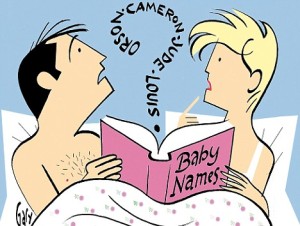 Being a life-long name-nerd, I spent a lot of my younger years dreaming up names for future children. In these daydreams, I was joined at the hip with someone who agreed enthusiastically with my name choices, or responded joyously : “But my darling! That has always been my favourite name, too!”. At the very worst, I hoped my future other half would be the type who said, “Honestly, I’m not very interested in baby names. Anything you pick you out will be fine, sweetie pie”.

These dreams did not eventuate. My husband turned out not to be the easygoing “whatever you say dear” sort of bloke, and it seemed as if every name I suggested was greeted with: No, Nope, Not that one, I don’t think so, and the occasional Absolutely not. I had a long list of names, and every single one got shot down without explanation. What was most frustrating was that he never suggested any names, so I had no idea what was wrong with all these names, or what names he would prefer.

After lots of arguments that never went anywhere, I came up with a new set of rules. He had to at least tell me what was wrong with the suggested name, or it stayed on the list. And just saying “I don’t like it” wasn’t good enough – he had to explain exactly why he didn’t like it. If his answer was something silly, like “I once worked with someone called that and I didn’t like them”, then the name stayed on the list.

There were a few false starts, as he feared as I would jump down his throat the minute he said anything. But I insisted I’d rather hear the truth, and told him I would hear him out without arguing. He started to elaborate on his Nos, and boy, did the flood gates open.

Sometimes it was hard to hear (some of these were names I loved after all), and sometimes I did break my promise and argued back, but as time went on it got easier and easier. The best part was that we were no longer deadlocked, and as he explained what was wrong with every single name I suggested, I started to get a feel for his tastes. That meant that rather than thrash out every name, I could automatically cross off those similar to ones he disliked.

Here are some of the highlights (?) of the process.

Alistair
Him: Too posh. People will think he has a country estate and a trust fund, but instead he’ll have a swing set and a piggy bank.
Me: Perhaps that will teach people not to stereotype names.
Him: There’s breaking stereotypes, and then there’s committing fraud. This is more the second one.

Ari
Him (surprised): Oh … I like that one! What language is it from?
Me: It’s Old Norse.
Him: Awsome, I love Scandinavian names. What does it mean?
Me: Eagle.
Him (outraged): What kind of sick meaning is that? How could anyone be so twisted as to call their child evil?
Me: Not evil … eagle. Like the bird.
Him: Well, now all I can think of is evil when I hear it.
(This ended in a heated discussion about people who don’t listen versus people who don’t speak clearly enough).

Angus
Our surname starts with Wil-, so any name ending with an S sound will end up having SWILL in it. This one sounds like “Anger Swill”.
(I cross off all names ending in an S sound).

Edmund
Me: I thought maybe with Teddy as the nickname, but is it too close to Eddie?
Him: It’s too close to Narnia, if you ask me.
Me: But you said yes to Lucy!
Him: Lucy sounds sweet – Edmund sounds like a little creep who will sell you out to the White Witch for a block of Turkish Delight.

Ezekiel
It’s like someone throwing crockery down a flight of stairs. No weird Old Testament names – they’re ugly.

Hamish
Him: I really hate Scottish names – they’re ugly and pretentious.
Me: But Scottish names are traditional in your family.
Him: Yeah well this is one tradition coming to an end now because I hate them!
(I cross off all Scottish names, gloomily knowing my parents-in-law will blame me).

Jago
It will get twisted around into Gay Joe.

James
Him: That’s the most boring boy’s name in existence.
Me (enraged): It – is – my – father’s – name!
Him (aghast): What? No! Your dad’s name is Fred!
Me: His name is James – his nickname is Fred!
(This ended in a heated discussion about people who don’t bother to learn their own father-in-law’s name versus people who cause confusion because their nicknames are nothing like their actual name).

Jasper
Him: Yuk, sounds evil.
Me: It doesn’t – Jasper is a saint who brought gifts to baby Jesus.
Him: No, Jasper is a crook who stole Dalmatian puppies so a demon hag could turn them into coats!

Jarvis
“Jar of swill” – don’t you remember the whole discussion we had about Angus?
(Oops, forgot to cross it off).

Jude
Hey Jude, na na na na – aargh that song is an earworm, now I’ll never get it out of my head.

Owen
Sounds as if he will always be owin’ money.

Allegra
Him: What would we call her – Leggy? Where does it come from, anyway?
Me (evasively): Well, Lord Byron had a daughter named Allegra.
Him: What happened to her – did she end up famous, like that other daughter?
Me: Um, no … he took her from her mother and stuck her in a convent, and she died.
Him: That’s horrible! This name should be banned!

Cordelia
Him: Her senile father didn’t love her! Why are all these names after girls abused by their dads?
Me: Clementine wasn’t abused.
Him: No, her father committed suicide!

Cressida
Him: Wasn’t she a prostitute?
Me: No.
Him: Well it reminds me of watercress anyway.

Esther
Me: This was my favourite teacher’s name.
Him: Too chemical-y.

Jemima
Him: Would she be named after the rag-doll, or the duck?
Me: Maybe after the beautiful daughter of Job in the Bible.
Him: So we’d be naming our daughter after a woman whose father was tortured for no reason? Can we not have any names from stories where the father has a terrible time, please?
(I cross off Keziah).

Madeleine
Me: I’m not sure about this one, what do you think?
Him: Nothing that starts with the word mad.

Sylvia
Him: No names starting with S, because look at the initial.
Me: You mean SW, south-west?
Him: No, S. Wil-, swill!
Me: Oh not this again.

Ursula
Him: Don’t you realise the joke on Friends was that Phoebe had a nice name while her evil twin Ursula had an awful one?
Me: So you like the name Phoebe?
Him: Yes.
Me: Me too, let’s add it to the list.
(Partial success!)

Zara
I hate names that start with Z.

As we worked through the process, it was apparent what names had to go – apart from anything Scottish, Old Testament, starting with Z, ending with X, or starting or ending with S. He didn’t like names that had negative meanings or associations, especially ones from childhood, and was exquisitely sensitive towards anything which sounded even vaguely negative or ridiculous.

Fussy and over-sensitive about names? Now that’s something a name nerd can understand. We weren’t so different after all.

POLL RESULTS
People thought the names that were most unfairly rejected by my husband were James and Harriet. However, there seemed to be sympathy for his views on Bede and Jarvis, as they received no votes to “save” them.

(Cartoon from the Daily Mail)

14 thoughts on “The Gentle Art of Discussing Baby Names”