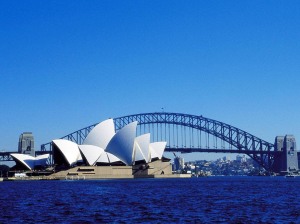 Today is the fortieth anniversary of the opening of the Sydney Opera House, officially opened by Queen Elizabeth on October 20 1973. Set on Bennelong Point, right near the Harbour Bridge, it is surrounded on three sides by the harbour, and flanked by the Royal Botanic Gardens. The Opera House’s distinctive design, featuring a roof of white “shells”, makes it an icon. It is instantly recognisable; a symbol of Sydney, and of Australia itself.

Despite its name, the Opera House isn’t just for opera, but is a performing arts complex. It was designed by Danish architect Jørn Utzon, who won the competition to design it in 1957. Unfortunately, in what seems to be a familiar story with foreign architects in Australia, Utzon was treated very badly after a change of state government, and eventually forced to resign from the project, never to return to Australia.

The project finished ten years late, and cost more than fourteen times its budget; Utzon wasn’t invited to the opening ceremony, nor was his name mentioned. The Sydney Opera House Trust later repented of its treatment of Jørn Utzon, and in the 1990s they reconciled with him, and he was appointed a design consultant for future work.

The story of Jørn Utzon is familiar in Australia. What many people don’t know is the name of the man who ensured we had a Sydney Opera House at all.

Eugene Goossens was an Englishman of Belgian descent, from a musical family. A prize-winning musician, he was an associate of the Royal College of Music, and had been a violinist in London before forming his own orchestra and becoming a conductor. For many years he taught and conducted in the United States, and when he left, nine American composers collaborated on a tribute in his honour.

Eugene came to Sydney in 1946, and was the first chief conductor of the Sydney Symphony Orchestra, and the director of the NSW Conservatorium of Music. It was in 1948 that he proclaimed, “Sydney must have an opera house!”. He successfully lobbied the NSW government, and controversially insisted it be located at Bennelong Point, which was being used for an ugly tram shed; the government wanted the opera house next to Wynard train station.

Eugene was a colossus of Sydney’s cultural landscape, who earned more than the Prime Minister, and used his celebrity to make classical music popular in Sydney. However, his life changed forever in the early 1950s when he met Rosaleen Norton, the “Witch of King’s Cross”. I must ask you to refresh your memory by re-reading the entry for Thorn, or if you didn’t bother reading it the first time, take a look now, otherwise the rest of this post is going to be confusing.

Eugene had a secret interest in the occult and erotica, and was fascinated by Rosaleen’s paintings, which exuded blatant sexuality while accessing pagan archetypes. The two of them embarked on a passionate affair, and Eugene was not just Rosaleen’s lover, but also a member of her coven. Together, they and other self-described witches took part in magical sex rites. Eugene wrote love letters to Rosaleen, telling her to destroy them, but she never did.

The police had been investigating Rosaleen for many years, and been collecting evidence against her, including photos of her taking part in rituals, considered pornographic at the time. It wasn’t long before they knew that Eugene was also taking part in these activities. Before they could arrest him, Eugene had left on a European concert tour, which included a visit to Buckingham Palace, where he was knighted.

When Sir Eugene returned to Australia in 1956, the police searched his luggage and found 1000 pornographic images, as well as masks and incense for rituals. Eugene now made a terrible mistake. He hadn’t been arrested or charged, and could have refused to answer any questions. Instead, he naively agreed to a police interview without a lawyer. Perhaps he thought a simple chat would clear the whole mess up – instead, they confronted him with the photographs and letters.

Rather than deny everything or pretend it had all been a silly joke, Eugene made a remarkably full and frank confession. He was now looking at a charge of scandalous conduct, which could bring a prison sentence of several years. His fall came swiftly – stood down from his positions and left to face the music alone, he was found guilty, and fined £100 for breaching the Customs Act. Although never charged for scandalous conduct, word soon got around as to what lay behind his court case.

Sir Eugene resigned, and left Australia in disgrace on his 63rd birthday, his career in ruins, and his wife on the next plane to America. He never recovered from the scandal, and died six years later, after suffering poor health. But a decade on, his vision became a reality. Although there was no reconciliation for Eugene, his portrait was hung in the Opera House library, there is a bust of him in the Opera House foyer, and the ABC named its main concert venue after him. In such ways we have tried to atone for once again taking down a foreign genius.

So when you look at the Sydney Opera House, blazing out pure and white against the brilliant blue harbour, remember that it is intimately connected with illegal sex and dark magic, and that we owe it to a man seen as a pervert and a disgrace. Thus are all things bound up strangely, one with another.

Eugene is the English form of Eugenios, from the Greek meaning “well born”, meaning born into a wealthy, noble, or highly-regarded family. The word eugenics comes from the same source, to indicate that only those of good “stock” should be permitted to reproduce.

Although there are several saints named Eugene, and four popes, the name never took off the way some other saints names have, and it wasn’t common during the Middle Ages. It received a boost in the 17th and 18th centuries, due to Prince Eugene of Savoy, one of the most successful military commanders in European history, and the greatest Austrian general of all time. However, the name was more popular in continental Europe than in Britain.

I was surprised to see from the historical records that Eugene was used as a female name much more often than I expected, and that in Australian records, numbers of male and female Eugenes were almost even. It did take me aback that Eugene was basically a unisex name in Australia.

Eugene is a name that, for many years, has had a rather dorky, uncool image. It’s a name that people seem to love bashing on blogs and forums. But I think it sounds very elegant – I see it as an intellectual name rather than a nerdy one. And the nickname Gene is pretty cool. Looking for something different, but with history and style? Maybe Eugene is the name you’ve been searching for.

POLL RESULT: Eugene received an approval rating of 54%. 28% of people thought it was okay, but 26% disliked it.

1 thought on “Waltzing with … Eugene”