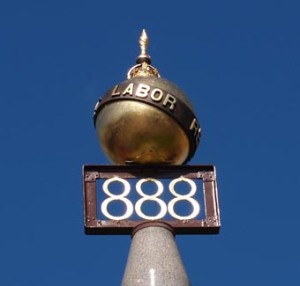 It’s a long weekend in New South Wales, South Australia and the ACT, and in those places, Monday will be Labour Day, celebrating the Australian labour movement. This vibrant and influential strand in Australian politic began in the early 19th century with the first craft unions, who banded together to seek higher wages and lower working hours.

This was in the days when any servant who left their employment without their master’s permission would be hunted down as a bushranger, and even taking off from work for an hour would see you put in prison. In those times, a fifth of the prison population were there for that reason.

It was in August 1855 that the Stonemasons Associations in Sydney went on strike, demanding to work only eight hours each day. They won their cause and celebrated with a victory dinner on October 1. The following year, the stonemasons of Melbourne formed a protest march to demand an eight-hour working day; they were the first organised group in Australia to achieve their goal with no loss of pay.

The goal of “eight hours labour, eight hours recreation, eight hours rest” was one that unionists had been working towards since the early 19th century, and in 1916 it became law in Victoria, but didn’t come in nationally until the 1920s, with the forty-hour week enshrined in 1948.

It would be nice to say that was the end of the workers’ struggle, but the forty-hour week is still under threat. Indeed, thanks to e-mail and mobile phones sometimes it feels as if we never leave work at all. So tomorrow please switch off your laptop, and have your calls sent to voicemail, because we deserve at least one day a year free from employment.

In honour of the Eight Hour Movement we will look at a name connected to the number eight.

Name Information
Octavia is the feminine form of Octavius, a Roman family meaning “eighth”, from the Latin octavus, and taken from a personal name. Although the personal name is believed to have been given to an eighth child, it’s also thought that it could have been bestowed on those born in the eighth month (originally, October).

The Octavii originated from the town Velletri, in the Alban Hills just south of Rome. The area belonged to the Volsci people, who in ancient times were one of the most dangerous enemies of the Romans. The famous warrior queen Camilla was one of the Volsci.

The most famous member of this family is the Emperor Augustus, whose original name was Gaius Octavius Thurinus. Coincidentally, he went on to give his name to the month of August, which is the modern-day eighth month. Augustus had both a sister and a half-sister named Octavia, and the younger one, his sister, was the wife of Mark Antony.

The marriage was one of political convenience, but Octavia appears to have been a loyal and faithful wife. Famously, Mark Antony abandoned her and their children to take up with the fascinating Queen Cleopatra; he divorced her and not long after, committed suicide. Octavia was left as sole caretaker of their children, as well as the children from her first marriage, and she was also guardian to Mark Antony’s children to one of his previous wives, and to those he had by Cleopatra.

While Cleopatra was seen as the alluring temptress, glamorous, brilliantly intellectual and powerful, Octavia was cast in the role of the good wife and mother, who does what is best for her husband, her family, and Roman society. In his play Antony and Cleopatra, Shakespeare portrays poor Octavia as short and round-faced with brown hair, to ensure the dichotomy between the two is even sharper. I’m not sure what is supposed to be so hideous about being short, round-faced and brown-haired (sounds quite cute), but to the Elizabethans it meant “ugly”.

She may not have been the sexy one, but the Romans esteemed Octavia for her strength of character and nobility, and when she died, she was given a state funeral and several honours, including being one of the first Roman women to have coins minted in her image. Her great-granddaughter was named Octavia after her, and this young lady was so beloved by the Roman people that they rioted to protest her cruel treatment at the hands of her psychotic husband, Nero. Unhappy marriages yet great popularity was the fate of these Roman Octavias.

Octavia has been used as an English name since the 17th century, becoming more common in the 19th. A famous namesake from the Victorian era was social reformer Octavia Hill, who worked towards housing for the poor; she was named Octavia because she was her father’s eighth daughter. An American namesake from this era was socialite Octavia Le Vert, a lavish hostess and supporter of the arts. More recently we might think of actress Octavia Spencer, from The Help.

In the US, Octavia was on the Top 1000 from the 19th century until the 1930s, then returned in the 1970s. This coincided with the career of African-American science-fiction novelist Octavia E. Butler, who began writing in 1971. Octavia’s final novel in her Parable series was published in 1998, the last time Octavia was on the Top 1000. In the 20th century, the name never got any higher than #484 in 1987.

Octavia could be used for an eighth child or grandchild, or for a baby born in August or October. Both these months celebrate milestones in the Sydney labour movement, and the number eight is the cornerstone of the Eight Hour Movement. Earlier this year, Labor MP Michelle Rowland welcomed a daughter named Octavia, a very suitable name for someone in labour politics.

The meaning of the name is connected to music, because an octave is the interval between one musical pitch and another and each scale has eight notes. In addition, the Octavia is a sound effects pedal used by Jimi Hendrix. The number eight is important in several spiritual or philosophical systems, such as Judaism, Wicca, Hinduism, Buddhism, and Taoism, and to the Chinese, the number eight symbolises prosperity and good luck.

Boosted by science fiction, Octavia may be a rarity, but doesn’t sound too unusual next to popular Olivia and Ava. Octavia is dignified, formal, strong, intelligent, and slightly clunky – a beautiful name with its own elegance.

POLL RESULT
Octavia received an excellent approval rating of 84%, making it one of the highest-rated names of 2012. 36% of people loved the name Octavia, and only one person hated it.

(Picture is of the Eight Hour Day Monument in Melbourne; photo from Monument Australia).

6 thoughts on “Waltzing With … Octavia”