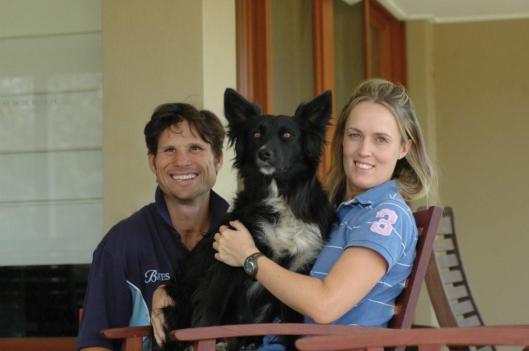 Equestrian Shane Rose, and his wife Niki, welcomed their daughter Olivia Cleo on May 8. Olivia Rose was born at Nepean Private Hospital at 8.22 am, weighed 3.7 kg (8 pounds 3 ounces), and measured 51 cm.

Shane joined his local Pony Club at the age of 5, and represented Australia at the Young Rider Trans-Tasman Competition at 21, riding Mr Joe Cool. Since then he has competed at many events, most notably at the 2008 Beijing Olympics riding All Luck, when the Australian team gained a silver medal in Eventing. Shane had already reached London when he had to pull out of this year’s Olympics, due to his horse Taurus suffering a minor injury. Shane will be replaced by Megan Jones, riding Allofasudden.

Niki (nee Chapman) has also represented Australia in Eventing, and trains young horses in Dressage and Eventing. She and Shane run Bimbadeen Park, a facility for breeding and training horses, and are on the Elite Squad with the New South Wales Institute of Sport. Shane and Niki were married early last year.