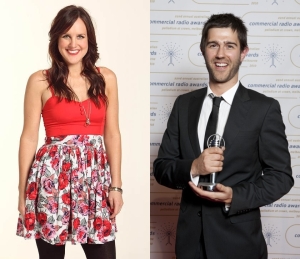 Radio host Kate Dimond, and her partner, radio producer Sam Cavanagh, welcomed their first child on November 22 – a son named Baxter. Baxter Dimond Cavanagh was born at 7 am weighing 3.1 kg (7 pounds) , and his parents, who both use short forms of their own names, apparently already refer to him as “Bax”.

Kate, nicknamed “Monty”, is the presenter of Saturday Morning Monty on Nova Radio. Sam is the producer of the Hamish & Andy Show on Fox FM; he has been friends with Hamish Blake since they were both in high school.