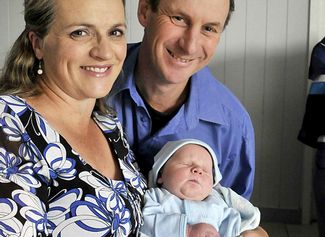 When Jeni and Ray got married, Jeni was 19, and didn’t want children. She was dismayed to find that her new husband, who had proposed marriage after 2 weeks of dating, wanted six kids.

Fast-forward 22 years, and Jeni and Ray Bonnell have recently welcomed their new baby, Damian Ronald, into their life. Damian Bonnell was born in Toowoomba, Queensland, on Saturday June 4 2011 at 6.50 am, weighing in at 8 pounds 11 ounces, or just under 4 kg.

Damian is the fifteenth child born to Jeni and Ray, making them the largest nuclear family in Australia.

Jeni describes their family life as “loving” and “happily chaotic”, but much like everyone else’s, just with extra washing to do. Oh, and they drive their own bus. Other than that, it’s a normal routine of school, homework and chores, with church and a roast dinner on Sundays.

Jesse and Brooke have moved out of home, but you can tell what a close family it is, because both of them bought houses right near their childhood home.

I know name collectors often say they would need to have more than a dozen children to use all their favourite names, so, er – here’s a chance to see what your life would look like if that happened!

When I see other families with lots of children, I’ve noticed that they often stick with an obvious theme to help choose baby names, such as all the names starting with the same letter, or all of them being from the Bible. Sometimes you can see that invention begins to run out, so that the first children have fairly standard names like Andrew and Emily, and then the names get steadily more random, so that the last ones are called Bobo, Hex and Glass or something.

Another naming issue for large families is that almost an entire generation can separate the first-born from the last-born, and if you always choose popular names, you’ll end up with your eldest children being called Darren and Brittany, and your youngest being called Kai and Sienna – total naming mis-match. This is something I see a lot, actually – it’s a dilemma for parents who have children in their early 20s, then have a couple more in their late 30s, because fashions in naming change the meantime.

I think that in general the Bonnells have avoided many of these pitfalls, and they certainly don’t seem to have had any problems running out of ideas for names. Which is a good thing, because the Bonnells say they would love to have more children! 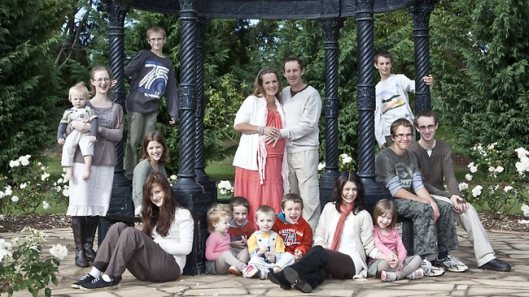