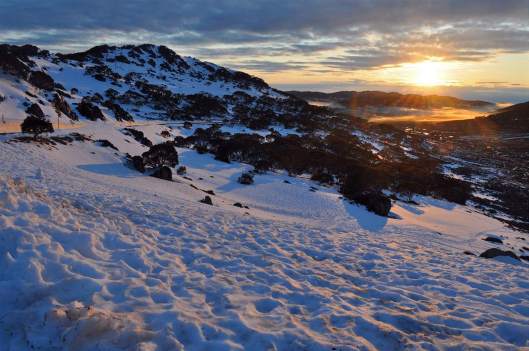 The Winter Solstice is just a couple of days away, and the weather has been noticeably chillier in most places for about a month. I like lots of things about winter, but find I have to keep reminding myself of them as the weather gets colder. To convince myself it wasn’t so bad, I looked up the coldest temperature ever recorded in Australia, and found it was minus 23.4 degrees Celsius (around minus 10 Fahrenheit), on June 29 1994, at Charlotte Pass in New South Wales. That made today seem more bearable.

Charlotte Pass is in the Snowy Mountains, and nearby Charlotte Pass Village is the highest permanent settlement in Australia at 1760 m (5777 feet). It is in this region you will find the country that Banjo Paterson wrote about in The Man from Snowy River, although you are far more likely to be hurtling down a ski slope than mooning over poetry here, because Charlotte Pass is Australia’s oldest and snowiest ski resort. It can snow at any time of year, and snow may lie on the ground for days, even in the middle of summer. The pass and village are named after Charlotte Adams, who became the first European woman to climb Mount Kosciuszko in 1881.

Charlotte is a feminine form of Charles; I think technically it’s the feminine form of Charlot, a French short form of Charles (it ends in an -oh sound, like Carlo). Charles is derived from a Germanic name meaning “man”, and it is something of a puzzler whether Charlotte should be translated as meaning the same thing, or does a feminine ending on the name turn it into its opposite, so that it now means “woman”? Is a man-ette a woman, I wonder? I’m not so sure (it doesn’t seem at all flattering to women, if so), but I will leave you to figure this gender confusion out for yourselves, dear readers.

Charlotte has been commonly used amongst European royalty; one was Charlotte of Savoy, who married Louis XI of France and was the mother of Charles VIII. The name became popularised in Britain in the 18th century because of Charlotte of Mecklenberg-Strelitz, who married George III, and whose daughter was named Charlotte after her. George III’s son, George IV, had only one legitimate child who was named Charlotte, and she died young, deeply mourned by the British public. Since then, the British royal family hasn’t seemed as keen on this name for its heirs to the throne.

Princess Charlotte Bay in far north Queensland is named after this unfortunate royal, and another Australian connection is that one of the First Fleet ships was named Charlotte. Rebel convict Mary Bryant named her daughter Charlotte after the ship she came here on. The Charlotte was later lost in the Canadian Arctic, and it recently had a fictional resurrection in the adventure film National Treasure, where the first clue to the treasure is found on the Charlotte.

Another exciting namesake is Charlotte Badger, a convict regarded as Australia’s first female pirate. She was a member of the notorious crew who commandeered the Venus and took it to New Zealand. The bawdy drinking song, The Good Ship Venus, references this historical event, and also refers to Charlotte … born and bred a harlot. Because of this, it is often surmised that Charlotte Badger is the original “Charlotte the Harlot“. This connection to Charlotte makes some parents uneasy, but I would be chuffed to share my name with an infamous pirate.

Good Charlotte’s Joel Madden is currently living in Australia and a judge on The Voice, so you’ve probably been hearing of them a lot. For some reason, the band name’s always reminds me of the thriller Hush … Hush, Sweet Charlotte, where Bette Davis plays the mentally fragile Charlotte Hollis.

Charlotte was #96 in the 1900s, and left the Top 100 in the 1910s. It disappeared from the charts completely in the 1940s and ’50s; it’s rather surprising that Charlotte isn’t strictly a classic, but rather a retro name in Australia.

Nationally, Charlotte is #1, and it is #2 in New South Wales, #2 in Victoria, #1 in Queensland, #1 in South Australia, #1 in Western Australia, #2 in Tasmania, #10 in the Northern Territory, and #1 in the Australian Capital Territory. From the birth notices I have seen so far this year, it looks likely to wear the crown again in 2013.

Charlotte is extremely popular, and no wonder. It’s pretty and elegant, yet sounds sensible and professional. It’s been worn by a tragic princess, a snowy mountain climber, a mystery ship, a coral bay, a genius spider, a pie maker, a film star, a deranged Southern belle and a saucy pirate wench.

That’s an impressive diversity of Charlottes, and I haven’t touched upon Charlotte Bronte, Charlotte Church, Charlotte Rampling, Charlotte Perkins Gilman, or the various Charlottes from Sex and the City, McLeod’s Daughters, All Saints, Rugrats or Revenge. I haven’t even mentioned the pudding named Charlotte, which has a fascinating history of its own.

Baby name style queen Elisabeth Wilborn picked Charlotte as her favourite Top 100 name, which is an impressive commendation. She can’t get past the popularity, but maybe you can, because despite its rapid ascent, Charlotte seems like a name that will wear well. The unisex nickname Charlie had a surge of popularity which now seems to be dying down, but vintage Lottie is the current fashionable short form.

POLL RESULT: Charlotte received an approval rating of 69%. 33% of people saw the name Charlotte as elegant and classy, but 23% thought it was much too popular.