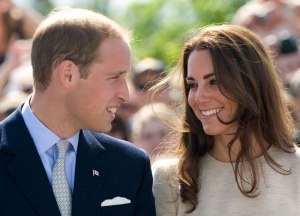 With the announcement early this month that Prince William and the Duchess of Cambridge are expecting their first child, the baby name blogosphere went slightly gaga. A few people even had a go at predicting the name of the royal baby, with Lou at Mer de Noms and Elisabeth at You Can’t Call It “It”! doing a great job. Of course, Kay at Nook of Names got a jump on all of us, and did her excellent analysis more than a year ago.

I’m going to admit right now that I don’t know what the royal baby will be named, and I can’t guess. I haven’t even been able to guess the baby names chosen by family and close friends, and these are people I know well.

But what I can do is to look at the names of the ruling monarchs of Britain and England (back to William the Conqueror), see how they were named, and then see what the royal baby might be called if the same principles were applied this time. As this gives a wide selection of choice, I have eliminated those names which seem  unlikely as they are still in use by other members of the royal family who have the title Prince or Princess, or which are too obviously “foreign”.

Although this doesn’t actually tell us what the baby will be called, as I studied the names of past monarchs, a few things stood out as to how they weren’t named.

Now, with our expectations in check, let’s see what names are available, if we follow history.

This seems to be almost everyone’s #1 choice for a baby princess, who would be named after her great-great grandmother, Princess Alice of Battenberg, the mother of Prince Philip. There have been four British princesses named Alice, but no queens – in fact, there are many more Queen Alices in fiction than in real life, giving this sweet name a distinct fairy-tale quality on a modern-day monarch.

The favourite choice of the gossip magazines, and the name of the baby’s grandmother. When the royal couple visited our region, they were asked in an interview if they would call their first daughter Diana, and William said it would be one of her middle names. I actually think it would be nice if Diana was left for Prince Harry to use for his daughter’s first name, since Prince William got his mother’s engagement ring.

A solid choice that many are tipping, with the princess to be named after her great-great-great-great grandmother, Mary of Teck. There have been six British princesses named Mary, and four queens, two of them rulers; it’s also been used amongst Scottish royalty. Historically speaking, Mary stacks up extremely well.

Another favourite choice for the baby princess, who would be named after her great-great-great-great-great grandmother, Queen Victoria. There has only ever been one queen with this name, but eight British princesses called Victoria – in fact it’s the birth name of Alice of Battenberg. A Victoria II would probably go down well with the British populace, although the Crown Princess of Sweden (related to the royal family) will be one day be Queen Victoria as well.

Few seem enthusiastic about a baby Princess Catherine, but historically, it’s the most likely option. Eighteen monarchs have been named after a parent, and of the three queens who have ruled Britain, two of them were named after their mother – and the third one took her mother’s name, Victoria, as her regnal name. Queen Elizabeth II herself is named after her mother, Lady Elizabeth Bowes-Lyons. There have been five English queens named Catherine, and at least one of them, Catherine of Aragon, was deeply loved by her subjects.

Margaret is a name from Scottish royalty, and a medieval Queen Margaret is one of the patron saints of Scotland. There has been only one English Queen Margaret, and she came to a sad end. A Princess Margaret would be named after Queen Elizabeth’s sister, and I somehow feel that this namesake, who attracted much scandal (whether deserved or not), would not be a help. However, one of Prince Philip’s sisters was named Margarita, and this is the English form of her name too.

Queen Victoria is the only ruling queen to be named after a man – her godfather. We don’t know who will be the royal baby’s godfather, but traditionally the best man from the wedding is chosen as one of them, which makes Prince Harry a shoo-in. Could the princess be given the feminine form of his name? Unlikely, although there has been both a Queen and Princess Henrietta of Britain.

A Princess Augusta would be named after her great-great-great-great-great grandmother, Princess Augusta of Hesse-Kassel (who was married to a Duke of Cambridge). There have been five British princesses named Augusta, and although a few of them were in line to one day become queen, by mischance none of them made it that far, giving this name an unlucky feeling for a monarch. This seems very unlikely as a possible royal baby name.

Everyone’s #1 choice for a prince, and you can see why. It’s not only a traditional royal name, held by six British kings and three princes, but also one of the patron saints of England. Prince George could be named in honour of his great-great grandfather, King George VI, although that monarch’s birth name was Albert. The name is also a traditional one in the Spencer family, and Prince William has a cousin named George on the Spencer side, as well as a relative called George on the royal side, the Earl of St Andrews.

This is sometimes mentioned as a possible baby name, because it is a traditional one in the royal family. Although there are three princes named Frederick in British history, there are no kings. Lord Frederick Windsor is the son of Prince and Princess Michael of Kent and there is a Spencer cousin named Frederick (the heir to the earldom); another family connection is that the Duchess of Cornwall has a baby grandson named Freddy. Prince Frederick could be named after his great-great-great-great-great grandfather, Friedrich, Duke of Schleswig-Holstein-Sonderburg-Glücksburg. Friedrich is an ancestor of both Queen Elizabeth and Prince Philip.

This would greatly appeal to fans of Lady Diana, as it is the masculine form of her middle name, Frances. As such, it may not meet with the approval of Queen Elizabeth. However, the prince could be named after his great-great-great-great grandfather, Francis, Duke of Teck – the duke’s son is the only Prince Francis the royal family have had.

Count John Hauke was another great-great-great-great-great grandfather. The British royal family avoid the name John, as it is supposedly an unlucky one for them. King John is a storybook villain, thanks to Robin Hood, and two Prince Johns died young. Diana wanted to call her eldest son John, after her father, but she was not allowed to because of this royal tradition.

What would you like the prince or princess to be named? And do you want the royal family to continue their naming traditions, or start creating new ones?

NOTE: Thank you to Elea from British Baby Names for explaining where King John got his name from.