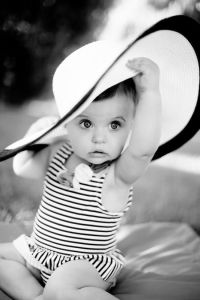 Samantha and Conall were expecting their first baby a couple of years ago. Samantha wrote in to the blog because her favourite name for a girl was Sadie, but every time she mentioned the name to someone, they brought up the old song Sadie the Cleaning Lady. It seriously made her question whether she should choose a different name.

In the end, Samantha and Conall had a boy instead, and he was named

which was a family name they had selected right from the start.

A little while ago, Samantha and Conall welcomed their second child. This time Samantha wondered if Sadie was now too popular, since it just joined the Top 100 last year. However, she still adored the name Sadie, and felt that she should go with her heart. So once their daughter arrived, there was no hesitation in naming her

with Patricia a family name they had always planned to use.

Samantha and Conall have only ever had positive comments about Sadie’s name, and not one person has mentioned the song to them. They are very happy with the choice they made.

Congratulations to Samantha and Conall on not one, but two beautiful children given the names they had always longed to use! Blog readers were keen for Samantha to stick with her favourite name, with almost 30% of them urging her to use Sadie.

If there’s any lesson to take away from Samantha’s story, please don’t listen to silly comments people might make about names while you are expecting. Not only were the remarks about the song obviously outdated, as the name Sadie was already zipping up the charts, but since Sadie was born they haven’t been heard again!