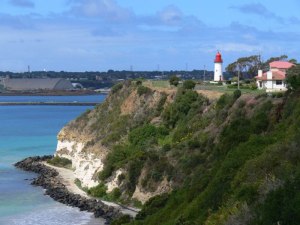 Famous Namesake
July 1 will mark the 164th anniversary of the independence of Victoria. When the British settled Australia in 1788, they claimed the entire eastern side of Australia as the Colony of New South Wales. The area now known as Victoria was first settled in 1803, partly due to French explorer Nicolas Baudin, who had spent several weeks surveying Bass Strait.

Governor Philip Gidley King got nervous that the French could be planning to establish their own settlement and challenge the British claim to Australia. Rather than risk a future where we might say Bonjour over a croissant or ride clean, efficient trains, the British formed a settlement at Port Phillip. It didn’t work out, and a year later they all nicked off to Tasmania. They tried again in 1826 (after another French explorer started hovering around), but that only lasted a year as well.

Paranoid government had failed, so it was capitalism’s turn to give it a go. Entrepreneurs arrived from Tasmania in 1834-35 to form settlements at Portland and Port Phillip (later Melbourne), which soon became prosperous, thriving communities, although at a devastating cost to the Indigenous inhabitants. Wealthy pastoralists took possession of vast tracts of fertile land, and soon Melbourne was the centre of Australia’s wool trade.

With such power and influence behind it, the Port Phillip District began lobbying for independence by 1840. In 1850 the colony was separated from New South Wales, and named Victoria, after Queen Victoria, and officially founded on July 1 1851. That same year, gold was discovered around Ballarat and Bendigo, sparking one of the largest gold rushes the world has ever seen. Wealth was about to begin pouring into its coffers, and Melbourne to become one of the great cities of the world.

The colony was off to a flying start, soon to to become the state we all know and love. The most beautiful state in Australia, ranging from lush pasture to snowy mountain ranges to golden beaches, it has charming country towns and a sophisticated, quirky capital. You can even get excellent croissants there. Viva la Victoria!

Name Information
Victoria was the Roman personification of victory in battle; her name is the Latin word for “victory”. In her older form, she was known as the goddess Vica Pota, translated by the Romans as meaning “conquering and gaining mastery”.

Victoria symbolised victory over death, and she chose who would be successful on the battlefield, so it was very important to get on her good side. Because of this, she was a popular goddess with many temples in her honour, worshipped by those who returned from war in triumph. She can often be seen on Roman coins and jewellery, and it is common to depict Victoria driving a chariot, probably because Nike, the Greek goddess of victory, was the charioteer for Zeus when he went into battle.

Victoria (or Nike) was depicted as a beautiful woman in flowing garments with large wings sprouting from her shoulders, so that she could fly over battlefields, giving encouragement to the conqueror and proclaiming messages of glory from on high. Statues of her in this mode are called winged victories, such as the Winged Victory of Samothrace. Later this image became Christianised, as it became the rule to portray angels, especially in church architecture, as graceful women with wings, a direct inspiration from the winged victories.

Victoria is also the feminine form of the Roman name Victor, meaning “victor, conqueror”. Like Victor, it was a popular choice for early Christians, symbolising victory over sin and death, and there are quite a few Christian martyrs named Victoria. Some are identified as women of the nobility, and others as servants, so it seems to have been used by all classes in the Roman Empire.

The name Victoria has long had a particular association with Spain, because it also one of the titles of the Virgin Mary: Nuestra Señora de Victoria, or Our Lady of Victory. In 1571, Pope Pius V instituted a feast day for Our Lady of Victory, after a coalition of southern European forces, led by Spain, defeated the fleet of the Ottoman Empire at the Battle of Lepanto.

Although well used in Continental Europe and popular in Spain, Victoria didn’t become common in Britain until the 19th century, when Queen Victoria took the throne in 1937 – there was an enormous jump in use between the 1820s and the 1840s, although it still wasn’t a popular name in England during Victoria’s reign.

Currently it is #80 nationally, #59 in New South Wales, #74 in Victoria, and #85 in the Australian Capital Territory. It appears very stable – it hasn’t been far outside since the Top 100 since the 1950s, and has only once made it into the Top 50. That makes it a safe choice which has never been highly popular, yet has remained common for more than half a century.

Victoria is a popular name around the world, but is most popular in the US at #19. Its popularity in the UK is similar to that in Australia. Not just popular in English-speaking countries, Victoria is a Top 100 name in Western Europe, Eastern Europe, and Scandinavia; still a favourite in Spain, it is also popular in Latin America. Meanwhile international variants such as Viktoria, Victorija, Victorie, Victoire, Vitoria, and Vittoria are popular in a host of countries. That makes Victoria an internationally recognised name that works cross-culturally.

Victoria is a classic traditional girl’s name that’s popular, but not too popular. It’s a long, feminine name that doesn’t seem frilly or elaborate, but clean and professional. It’s well known internationally without seeming exotic. It has a strong meaning connecting it to power and success, which is quite unusual for a girl’s name.

Victoria is a goddess, an angel, a saint, and a winner of battles. Many people will connect her with a queen, and there’s no doubt that Victoria is royal to her fingertips. She’s classy, and every inch a lady, but Victoria’s Secret makes her seem rather sexy too. A fun nickname would be Plum, from the Victoria Plum, like the writer Plum Sykes. My preference is for the lively Vita, inspired by another author from Kent, Vita Sackville-West.

POLL RESULT
Victoria received an outstanding approval rating of 91%, making it one of the highest-rated names of 2015. 33% of people thought the name Victoria was okay, and only 3% hated it.