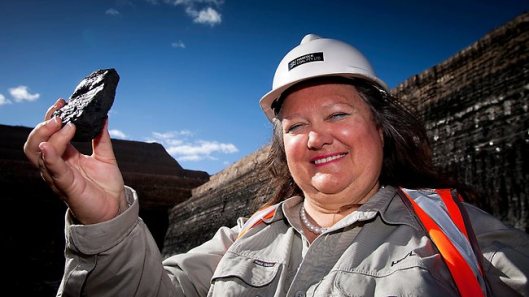 Famous Namesake
The Channel 9 mini-series House of Hancock has just come to an end, having enjoyed a certain amount of notoriety and controversy. The series is based on one of Australia’s real life soap operas: the family of wealthy Western Australian mining magnate Lang Hancock.

The main focus of the mini-series is on the relationship between Lang and his daughter Georgina (called Gina), brought under pressure when the teenaged Gina married a man old enough to be her father, which is increased when freshly-widowed Lang married his Filipina maid, who was young enough to be his daughter. The story then follows Gina’s relentless rise to wealth and power as Lang’s heiress, accompanied by family ructions.

Gina Rinehart is the chair of Hancock Prospecting, founded by her father Lang. She is the richest person in Australia, and a few years ago was the world’s richest woman, but is now only the sixth-richest. She was named after her father, who has George as one of his middle names, while her middle name Hope is her mother’s name.

Mrs Rinehart took legal action against the makers of House of Hancock, with her lawyer calling the program “almost entirely fiction”, “replete with falsehoods”, and its depiction of true events as “twisted.” Part of her legal team’s argument was that actors in House of Hancock breached consumer law against misleading and deceptive conduct by pretending to be someone else. I can only think a lot of actors, if not all of them at some time or another, have similarly breached consumer law.

Her lawyers were successful: Gina was granted access to the second episode before it went to air, and certain cuts were hastily made to key scenes before the show went to air, leading to a very abrupt ending. Despite all the cuts, House of Hancock was a hit, attracting more than 25% of the audience, or nearly 2 million viewers per episode. Actress Mandy McElhinney (Rhonda from the AAMi commercials) has garnered praise for her outstanding performance.

Although the details haven’t been made public, apparently one of the things Gina objected to was her father’s ghost coming back to chat with her, which she assures us did not happen. I for one believe her story, and don’t need a lawyer to convince me. She also says that she never fought with her stepmother, and in fact never spoke to her at all, painting a picture of happy family life in the process.

Despite making sure that House of Hancock came with a disclaimer that it had been fictionalised for dramatic purposes and was not a documentary, Gina Rinehart is still fuming, and will now sue Channel Nine for defamation. No stranger to the courtroom, she mounted an eleven-year legal battle against her stepmother Rose Porteous, claiming that she had hastened Lang Hancock’s death (the coroner determined he had died of natural causes). In turn, Gina has been in a long-running legal feud with her children over the family trust.

So that’s Georgina Rinehart – large, in charge, rich as filth, and liable to sue you if you claim she talks to ghosts and her stepmother.

Name Information
Georgina is a feminine form of George. Like its male counterpart, it has been in use for many centuries, but only gained prominence after the House of Hanover began to rule Britain in the 18th century, with George becoming a traditional royal name.

Georgina has been used as a middle name in the royal family – an example is Princess Maud of Fife, grand-daughter of Edward VII. It’s also been used by the aristocracy: Georgina Ward, Countess of Dudley, was one of the great beauties of the Victorian era, while Georgina Gascoyne-Cecil, Marchioness of Salisbury, was the wife of British prime minister, Lord Robert Cecil.

Georgina has been rather a favourite for characters in children’s literature, with the best known perhaps Georgina Kirrin from Enid Blyton’s Famous Five series. Georgina is a tomboy who is always called “George”. In the TV series Gossip Girl, the character of Georgina Sparks has been turned into one of the show’s villains; she goes by “Georgie”.

Georgina is an underused classic name which has never left the charts, yet never been popular. It was #171 in the 1900s, and hit its peak in the 1970s at #109 – it may not be a coincidence that the Famous Five series was on TV in that decade. Currently it is around the mid-200s, and I see the name Georgina quite often in birth notices.

Georgina is more popular in the UK, where it is #173 and falling, but doesn’t chart in the US. This gives it a rather “British” feel, although it’s used internationally, including in Spain, the Netherlands, and Central and Eastern Europe.

This is a stylish yet solid choice which has all the advantages of a classic name that doesn’t feel dated, without any popularity to worry about. It has a rather upper middle class image in Australia, but has a number of breezy, carefree nicknames to go by, including George, Georgie, Gia, Gina, Ginny, Gigi, and Nina.

POLL RESULTS
Georgina received a creditable approval rating of 73%. People saw the name Georgina as familiar without being common (21%), and stylish and classy (16%). However, 10% were put off the name by Gina Rinehart.

(Photo of Gina Rinehart from news.com.au)