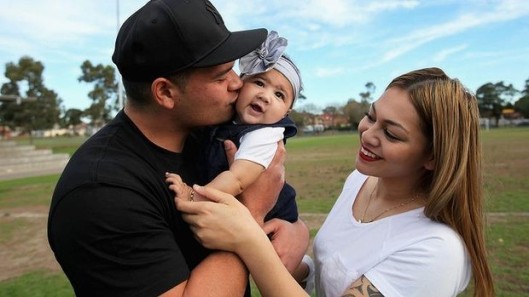 Ben Murdoch-Masila, and his partner, Roxy Mura, welcomed their daughter Acacia-Rose earlier this year [pictured]. Acacia-Rose is named in honour of Ben’s best friend, Mosese Fotuaika, who passed away in tragic circumstances last year: Ben and Mosese first met in a park in the Brisbane suburb of Acacia Ridge. Ben is originally from New Zealand, and has played rugby league in Australia since 2010. He signed with the Penrith Panthers this season, and they will be playing the Canterbury Bulldogs in the finals this weekend. Ben has also played for the Tongan national team.

Ben’s friend Mosese was also from New Zealand, and his fellow team mate at the Wests Tigers. Several months after Mosese’s death, his girlfriend and high school sweetheart Shanice Alaiasa gave birth to their daughter, who she named Taya – the name Mosese had chosen for her before she was born.

Ashley Harrison and his wife Majella welcomed their son William late last year, a brother for Ethan. Ashley made his debut in 2000 and played almost 300 games during his career; he played for several clubs, most recently the Gold Coast Titans, and was selected to play for Queensland in State of Origin, as well as the Prime Minister’s XIII and the NRL All-Stars. Ashley recently retired from the game because of a severe neck injury.

Ryan Stig, and his wife Andrea, welcomed a daughter named Norah Joy earlier this year. Ryan played for the Newcastle Knights, but was forced to stop playing in 2011 after developing a blood clot on his eye and chronic fatigue. He was recently diagnosed with Lyme Disease, and will be travelling to Germany for treatment this month.