Veteran journalist Peter Harvey was greatly loved and admired during his long career, and known to colleagues as “the voice of God”. A fifth-generation reporter, he won numerous awards for his work in Australia, Britain, and the United States. Peter passed away in March last year, and since then both his children have welcomed new babies to the family.

Peter’s daughter Claire Harvey is the deputy editor of the Sunday Telegraph, and she is married to Ross Neilson, director of the Salmon Neilson Company, which offers communication, media, and governmental advice to corporations and industry groups. On September 30 they welcomed their first child, a son named Reg, who was born at Prince of Wales Hospital in Randwick.

Peter’s son Adam Harvey is a reporter on the ABC’s 7.30 Report, and he is married to Eliza Harvey, a presenter on the ABC’s Weekend Breakfast. Eliza is the daughter of award-winning journalist Geraldine Doogue, who for many years has been the host of ABC’s Compass, and retired journalist Tim Blue, who until recently was a senior finance writer for The Australian. At the beginning of the year, Adam and Eliza welcomed their son Sean.

With such pedigrees behind them, you would expect Reg and Sean to become their family’s 7th generation of journalists, but we will have to wait and see. 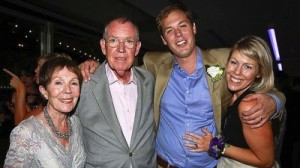