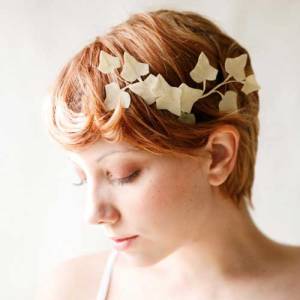 Ferrice and her husband are expecting a baby girl, and she always wanted to use the name Ivy for her daughter, which is the middle name of a dear departed family member. However, she now worries that the name might have become too popular. The level of popularity doesn’t worry her so much as the idea that the name might be too “trendy”; however, there is a great deal of sentiment attached to the name Ivy.

Ferrice and her husband have a son named Bernie (a family name), and their surname begins with W and ends with R eg Webster.

However, they aren’t in love with any of these names, except Tess, and Ferrice’s husband isn’t quite on board with it at this stage.

Ferrice would love to know what blog readers think of the name Ivy, and whether it’s too popular. She’d also be open to hearing name suggestions from anyone who thinks there’s another name they might like better.

As a name blogger, my heart sinks whenever I hear someone say they are worried that a name they love is now “too popular” to consider. I can’t help wondering if I am contributing to the problem by providing information on name popularity, and I hate the thought that I might be unwittingly putting parents off using perfectly nice names.

Ivy is a popular name, and fits in with the trend for simple, pretty names with a V, such as Ava and Evie, and for non-floral plant names, such as Olive and Willow. It’s also a Downton Abbey name, which has helped give it widespread attention, and a celebrity baby name, after it was chosen as the middle name of pop star baby Blue Carter. No wonder the name has become popular!

However, it may be popular and on trend, but to me it isn’t a “trendy” name. Ivy isn’t a classic, but it is a traditional name with quite a bit of history, and was very popular in the 19th century (more popular than it is now). It has been climbing since the 1980s, so it hasn’t come out of nowhere, and its biggest burst of popularity was in 2009, before the television show and Blue Ivy.

You may be somewhat reassured to know that Ivy isn’t shooting up crazily in popularity – it was one of the fastest-rising girls names of 2012, but from the 2013 data that has come in so far, it seems to be still rising, but at a more modest pace. In 2012 it was #22, and it went up 18 places to reach that position.

For what it’s worth, I think Ivy is a lovely name – simple, charming, retro, fresh and green sounding, and somehow more piquant and distinctive (even seductive) than many other popular “old fashioned” plant names like Lily and Daisy. I completely understand why so many parents have chosen it.

I tend to feel that when it comes to honouring someone, sentiment far outweighs any other factor. This is the name of someone you love, and must miss every day. I can’t help thinking that you might regret giving up this name for a reason such as popularity – especially knowing that your reasons for loving the name Ivy have nothing to do with how popular it is.

However, popularity genuinely does bother some people, and if you really feel that the name is too popular for you, then using it in the middle position seems like the obvious solution. The trouble is, you don’t have too many candidates for a first name at this point. Most of the names you’ve considered are similar to Ivy in regard to popularity, and you admit that you don’t really love them.

Tess seems like the most likely proposition. This is a cute name which has never become popular, and is very fashionable – and it is a family name. Bernie and Tess sound pretty adorable together too. How do you feel about Tess Ivy? You did say your husband is not really convinced about Tess though, which puts a bit of a question mark over it.

If you’d like to try out some other names that have a similar level of popularity to Tess, and sound okay with Ivy in the middle, and with your surname, you might consider:

I hope I’ve been able to provide you with at least some help, and perhaps when you talk it over with your husband, your choice will feel clearer. Please feel free to write in for further assistance if other names become possibilities for you.

UPDATE: Unfortunately Ferrice never got back to me, but a little bird tells me that she did indeed name her daughter Ivy.

POLL RESULTS: 95% of people thought Ferrice should choose the name Ivy, with 35% saying that popularity shouldn’t be considered at all when it comes to the name you love best, and 25% believing that as this was a family name, the popularity didn’t matter.

6 thoughts on “Is Ivy Too Trendy?”