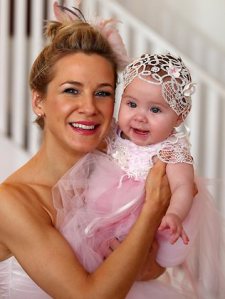 A new trend at the moment is for a baby’s christening gown to be modelled on its mother’s wedding dress (hands up anyone who thinks it’s weird for a baby to wear a wedding dress). Mum Annie [pictured] loved her pink tulle and silk wedding dress so much that it seemed the obvious choice for a mini-me christening gown for her seven-month old daughter – and at $1200 a pop, dress designers are happy to replicate their creations in teeny-tiny mode. I know people are interested in what names the wealthy and fashionable choose for their children, and Annie’s daughter is named Pierra – which looks like a feminine form of Pierre, although it also looks like Sierra with a P.

I featured Sassafras on the blog as a girls name last year, but admit to feeling a bit doubtful at the time because I’d only ever seen the name used once – in a birth notice four or five years ago. Was it too out there to suggest as a baby name? Then after seeing a Sass Winnie in a birth announcement in August, regular commenter Sophia said that she knew a little girl named Sassafras, nn Sass. I idly asked an interstate friend over the phone if she knew a Sassafras (not thinking she would) – answer: yes, there’s a Sassafras at her son’s primary school. Now I see a toddler named Sassafras in the local paper from Bellingen on the mid-north coast of New South Wales. If nothing else, my mind has been eased about including Sassafras. It’s clearly less daring, and a lot less rare, than I thought.

A baby boy from Queensland was born very unexpectedly while his mother was taking a nap. He was born in July, on the night of the NRL State of Origin decider between Queensland and New South Wales, just as his father had left for the game. He was named Benji, after his dad’s favourite NRL player, Benji Marshall, from the Wests Tigers, who has recently changed codes and countries and gone to rugby union in New Zealand. I have noticed a lot of baby boys named Benji in the past year or so, and wonder how many of them were named after Benji Marshall – and if the numbers will dry up now that he has gone.

This website has photos of twins from around the world. WARNING: MAJOR CUTENESS ALERT! Name nerd theory states that twin names must not be “matchy”, but here’s proof tons of parents think the matchier the better. Here we have Zoe and Chloe, Jaqi and Jaqari, Xander and Xavier, Evan and Ivan, Jake and Jimi, Ruby and Rose, Jack and Daniel. I did like Reef and Eden, and Gwendoline and Jasper.

This mother of a gorgeous baby boy has the name Oriana, a medieval literary name which may mean “sunrise” or “gold”, or possibly something else. The name might remind you of the famous cruise liners, or more recently, the Bratz doll. It’s certainly a stunning name which seems very usable, with Ariana and Aurelia so fashionable at present. Oriana has a heartbreaking struggle ahead of her, so we wish a speedy recovery to her son Luca.

A story on postnatal depression, and how worryingly few people take it seriously enough, interviewed a mum, now recovered from her PND, named Cybele. Cybele is a Phrygian mother goddess whose ancient Near Eastern name possibly means “mountain”, to suggest “born from stone, born from the earth”. It is said SIB-uh-lee. I think that’s a gorgeous name, and with Sybilla so trendy, seems like a great choice for parents who want something a bit different.

Lavington Fisher of South Australia recently passed his 100th birthday, and looks absolutely amazing for his age. Lavington is a surname from place names in England meaning “Lafa’s people”; the Anglo-Saxon name Lafa may be understood as “survivor, treasure, heirloom, remnant”. Lavington is a good name for someone who has lived for more than a century! There is a place in New South Wales called Lavington, named after the English towns. It reminds me of both lavender, and lamington cakes.

The Great Australian Bake Off on Channel Nine included a contestant in her twenties named Bliss. I’ve noticed quite a few people on name forums who love the idea of Bliss, but worry that it won’t seem “name-like” enough. Having seen Bliss on a real person, I can assure them it doesn’t seem much different to Joy as a name. The trouble is that to me Bliss always seemed like a very flakey name, and the real life Bliss was actually quite ditzy and flakey, so it was rather annoying to have my name prejudice confirmed so readily.

The winner of the show was named Nancy, and I was delighted to see this name on an intelligent, attractive engineering student. I featured this name on the blog, and was pleased how well Nancy works as a young person’s name (apart from on girl detective Nancy Drew, who must be getting on a bit by now). It’s such a smart, spunky name.

Abby from Appellation Mountain did a Nameberry post about some interesting names from her family history. Most of the names from my family tree aren’t too exciting. However, when I looked way, way, way, way back, I did find a Hercules in the 17th century, a great-uncle many times over. Now I wouldn’t name a son Hercules, but it could be usable as a middle name. The thing is, is a connection from the 17th century, not even a direct ancestor, too much of a stretch as a “family name”? At what point does a name from your family tree cease to become a family name (considering that all people are related to each other at some point)?

I was chatting to some friends about the surge in popularity for retro names from the 1900s to the 1930s, such as Olive, Hazel and Florence. The general consensus was that they were over it – it’s been done to death, and so, so boring. They thought to have an interesting retro name now, you had to turn to the 1940s and ’50s – something like Linda or Valerie would seem much more hip. What staggered me is that Olive has only has just started to become popular, while Hazel and Florence aren’t even in the Top 100 yet! Yet they are already “boring”. At this rate, we will have revisited all the name trends of the 20th century by the next decade.

6 thoughts on “Names Spotted at Home and Abroad: Winter Edition”