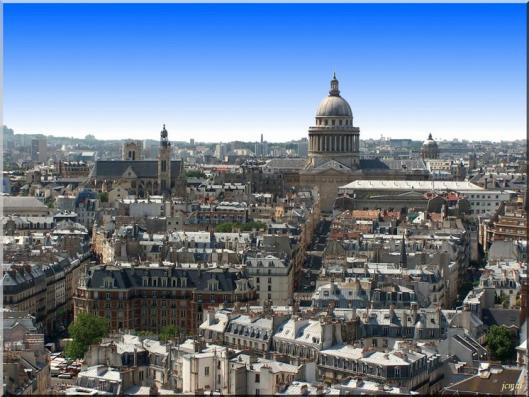 The name Genevieve is in common use because of one woman – Saint Genevieve, one of the patron saints of Paris. Genevieve was born in the 5th century, and embarked on a holy life at an early age, because she was only a little girl when she was consecrated to God. She became a nun while still a teenager, and after the death of her parents, went to live in Paris in a religious community. Genevieve lived an austere and pious life, with frequent visions of heavenly saints and angels, and works of charity.

In 451 Attila and his Huns were sweeping over Gaul, and the inhabitants of Paris prepared to flee in terror. Genevieve encouraged them to trust in God, and urged them to pray, telling them that if they did so, Paris would be spared. Apart from anything else, this was sensible advice, because it restored calm to the city, and of course Paris would have been taken at once if its citizens had evacuated. Attila turned his hordes towards Orléans, leaving Paris untouched. (Fortunately Orléans didn’t come to any major harm, and the Huns were eventually defeated).

Some years later, Paris was taken by the Frankish leader Childeric. During the siege, Genevieve distinguished herself through many acts of self-sacrifice, and because of her diplomatic efforts, Childeric, and his successor, Clovis I, showed unusual clemency towards the citizens of Paris. Clovis I made the city his capital, which was the start of Paris becoming one of the great capital cities of the world.

A hill on the city’s Left Bank where Saint Genevieve prayed is still known as the Montagne Sainte-Geneviève, and on top of it is the Bibliothèque Sainte-Geneviève, the main reference library for students from the nearby Sorbonne, which inherited the writings and collections of a medieval abbey where St Genevieve is said to have been buried. It has been at the heart of French culture and education from the beginning. One of the library’s directors in the 20th century was Geneviève Boisard, so the saint’s name lived on in many ways.

Another famous French namesake is the legendary Genevieve de Brabant, a noblewoman falsely accused of infidelity who lived in a cave with her young son, fed by a helpful deer, until her husband found her after discovering her accuser’s treachery. The story is based on the true story of Marie de Brabant, wife of the Duke of Bavaria, who was suspected of adultery due to a mix-up in the mail, tried, and beheaded in 1256. When it was proved that the verdict had been invalid, the duke had to do penance. The change of name from Marie to Genevieve is almost certainly due to the cult of Saint Genevieve (the deer seems to be borrowed from the legend of Saint Giles).

The meaning of the name Genevieve is obscure. In medieval times the saint’s name was recorded as Genovefa (Latinised as Genoveva), a Gaulish name which may come from the ancient word for “tribe, family”, related to the word for “born”, and thus a distant relative of the word Genesis (which comes from Latin, but from the same ancient roots). Suggestions that Genevieve is a Gaulish form of Guinevere or Jennifer are persistent but most likely fanciful (for a start, Guinevere is already a French form of a name – it doesn’t make much sense a name would two different French forms).

The French spelling of the name is Geneviève, and in English, we remove the accent mark over the name, which also changes the pronunciation to JEN-uh-veev. I won’t attempt to reproduce the French pronunciations, which differ  depending on someone’s accent – a Parisian will say Geneviève differently to a French-speaker from Brussels or Montreal.

Genevieve has charted in Australia since the 1930s, entering the charts at the same time as Jennifer. I suspect that Genevieve was seen as a slightly more exotic version of Jennifer, but while Jennifer went straight into the Top 100 from nowhere, Genevieve debuted at the more modest #306. I think in some ways Genevieve has had the advantage, because while Jennifer peaked in the 1950s and enjoyed a lengthy afterglow of popularity lasting many decades, Genevieve has never been higher than #214. Currently Genevieve is #279 in New South Wales, where it is still out-performed by Jennifer at #260. In Victoria, Genevieve is #179, and Jennifer #206.

Genevieve is an elegant French name, which has remained in constant use here for many decades, without ever becoming popular. It’s pretty and feminine, but not in the least frilly – in fact, it sounds quite intellectual because of its importance to French culture. Its saintly namesake was a woman of brains and courage, and its legendary namesake part of a romantic fairytale which corrects the cruel injustice of real life.

In the past, the most common nicknames for Genevieve were Gen, Genna or Genny (still influenced by Jennifer), but you could also use Ginny, Genie, Gigi, Neve, Eva, Eve, Evie, Viv, Viva or Vivi.

POLL RESULT: Genevieve received an approval rating of 83%, making it one of the most admired names of the year. People saw Genevieve as intelligent and sophisticated (21%), beautiful and romantic (20%), pretty and elegant (18%), and not overused (10%). However, 9% preferred the French spelling and pronunciation of the name. Nobody thought that Genevieve was “too French”.

(The photo shows a view of the Montagne Sainte-Geneviève in Paris, which is
in one of the oldest parts of the city. In the distance you can see the dome of the Panthéon,which was built over a church dedicated to Saint Genevieve, and according to legend, where her relics were kept)